Faults can be both active and inactive. Understand the definition of faults, discover the different types of faults such as dip-slip, strike-slip, and oblique-slip faults, and compare active vs. inactive faults. Updated: 09/12/2021
Create an account

The word 'fault' comes to us from Old Scottish and means 'be deficient.' In the case of the rocks that make up Earth's lithosphere, the deficiencies in question are cracks in an otherwise solid rock mass.

The lithosphere is constantly pushed and pulled, squeezed and stretched. Quite often, the forces exceed the strength of the rocks, and they break (geologists call cracks in rocks fractures). Once fracturing occurs, application of additional force can cause the rocks on either side of a break to slide.

A geologic fault is a more-or-less planar (flat) fracture along which the rocks on either side have slid past each other. The sliding surface is also known as the fault plane, or the fault surface. The amount of sliding that occurs is known as the slip.

Rarely, however, does the shifting motion occur along a single, simple plane. As the rocks grind past each other, they get crushed and broken, and movement can happen anywhere within that volume of disturbed rocks. Due to this, geologists often refer to the crushed volume of rock as a fault zone.

The rock masses on either side of a dipping fault are also given names that are derived from the angle of the fault: the hanging wall and the footwall. The names come from the mining industry. When a miner was extracting the minerals along a dipping fault, he would be standing on the footwall and the hanging wall was hanging above his head. How practical. 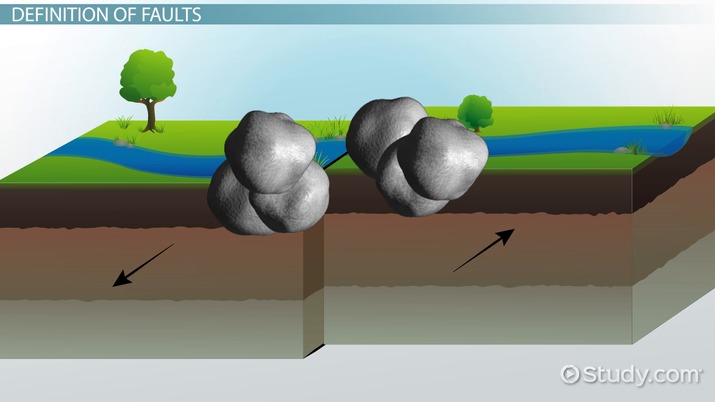 Try it now
Back
Coming up next: Felsic: Definition & Composition

You now have all of the fault geometry and terminology you need to classify different types of faults.

Faults are classified based on how the rocks on either side moved relative to each other. In other words, the name tells you something about which side moved up or down or to the left or right, with respect to the rocks on the opposite side.

If rocks slide directly up or down the fault plane, the movement is called dip-slip. That kind of movement results in the same rock layers being higher on one side than the other (in other words, there has been vertical movement of the rocks).

A normal fault is one where rocks on the hanging wall side slide down an inclined fault surface, just like if you slid down a playground slide. Normal faults form when rocks of the lithosphere are pulled in opposite directions (called extensional forces).

A reverse fault is - as you might guess - the opposite case; the hanging wall rocks were pushed up the inclined fault plane. Reverse faults are the result of compressional forces - when rocks are squeezed from opposite directions.

If the fault plane has a dip of less than 45 degrees, the reverse fault is called a thrust fault.

Here's a puzzle for you: what kind of fault would you call it if the fault plane was vertical and either side could be the hanging wall or the footwall? The answer is in the forces at work. In most cases, that situation is the result of extensional forces, so it would be a normal fault; however, if compression was the cause, it would be a reverse fault.

Sideways-sliding along the fault plane is referred to as strike-slip. There are two types of strike-slip faults.

Imagine you are talking with a friend, facing each other directly across a strike-slip fault, when an earthquake happens. The rocks on either side slide sideways. After you both pick yourselves up off the ground, you see that each of you has shifted position relative to the other.

Sliding on faults is rarely all up, down or sideways. Usually, the rocks slide in some combination. That type of motion is called oblique-slip. Normal, reverse, thrust and strike-slip faults can all be of this variety.

There is really no place on earth that is fault-free. Fortunately, the forces that create faults do not always persist, so faults can become inactive, and most of them fall into that category (although they can also reactivate).

But there are many places in the world - particularly near tectonic plate boundaries - where the lithosphere is constantly pushed and pulled. In those places, active faults are responsible for earthquakes.

So yes, our planet has deficiencies. And we call them geologic faults.

Geologic faults are fractures in lithospheric rocks, and fractures are cracks in rocks, along which movement of rocks has happened. The sliding surface is the fault plane and the amount of sliding is called the slip, while dip-slips are when rocks move up or down on a plane.

Sliding of rocks may be up, down, sideways or at other angles on the fault plane, depending on whether (and how) rocks are being stretched or compressed. Active faults are concentrated near plate tectonic boundaries, while inactive faults are faults where the forces have stopped persisting.