In this lesson, learn about the Fauvists, the 'wild beasts' of the early 20th-century French art scene. Learn about Fauvism, its artists, and the characteristics that define the movement. Then, take a short quiz to test your knowledge.
Create an account

A Movement to Change the Definition of Art

If you're old enough to remember the turn of the 21st century, you probably remember it was a time when a lot of people felt great change in the air. The world focused on technology, and since then, cell phones evolved into smart phones, the Internet brought the world closer together, and videos became high definition.

The start of the 2000s wasn't the first time radical change overtook the world. At the dawn of the 20th century, the definition of art was changing worldwide. Even France, which had long set the standard for what art was throughout Europe, was forced to reconsider its values and to embrace new, more abstract art forms. But can a group of painters known as wild beasts create paintings you would ever call art?

The movement in painting that led the charge toward well-known 20th-century painting styles, such as Cubism and Expressionism, was Fauvism. Fauve is French for 'wild beasts,' a name which stuck among the critics who viewed their work. Fauvism was inspired by Post-Impressionism, a 19th-century movement back toward form in painting, and away from the optical realism created by Impressionism. Fauvism was started as a group of loosely associated painters who sought to bring personal expression into their paintings.

One of the greatest inspirations for the Fauvists was the Post-Impressionist artist Paul Gauguin (1848-1903). Take a look at Gauguin's The Spirit of the Dead Keeps Watch (1892). Do you see how the artist uses color and form to define the woman in the bed? Gauguin believed color could be used to translate emotions beyond words and into objects in paintings.

Other influences on Fauvism include Post-Impressionist artists Vincent van Gogh and Paul Cézanne. 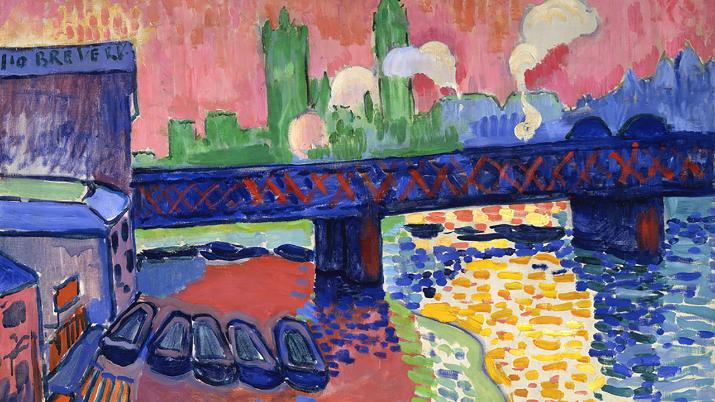 Coming up next: How to Make Stop-Motion Animation

The use of color and form in works such as Gauguin's became the inspiration for Fauvism, which lasted from 1903 to 1908. It was started by French painters Henri Matisse and André Derain. Maurice de Vlaminck, Albert Marquet, and Henri Manguin also later joined the movement. The characteristics of Fauvism include:

Imagine trees that don't have to be green and brown, people who are blue and green, and red skies in paintings. All of these ideas, which express the feelings of the artist through a somewhat irrational use of color, create the Fauvist style.

Several painters became associated with the movement of Fauvism. One of the most well-known was French-born Henri Matisse (1869-1954). Matisse created paintings in the Fauvist style, including one of his most famous paintings, The Dance (1910). The painting was originally commissioned for a Russian industrialist. Matisse created several versions of The Dance before arriving at the final one, seen here.

Do you sense the light airiness of the dancers in the background as they almost bounce off the ground below them? The orange-red color of the dancers evolves throughout the versions of the work, starting out as peach-colored figures and becoming more representative of a ritual being performed with their darkened colors. Matisse's most famous Fauvist work is Le Bonheur de Vivre (1905-1906), which translates as The Joy of Life.

A second major player in the Fauvist Movement was another Frenchman, Albert Marquet (1875-1947). Marquet's works focused mostly on landscapes, seascapes, and portraits.

Take a look at Marquet's Bassin du Roy, painted in Le Havre, France in 1906. Notice the almost unrealistic ways in which the buildings are portrayed and how they get even more out of focus as you see their reflections in the water.

Marquet painted in the Fauvist style for some time before taking on a style closer to Post Impressionism's reliance on reality.

Fauvism paved the way for Analytical Cubism, which Spanish painter Pablo Picasso co-created with Georges Braque as a means of expressing ideas abstractly using geometric shapes. Fauvism also led to the Expressionist Movement, which focused on colors and abstract forms and the creation of intensely emotional and thought-provoking works as late as the 1930s in both Germany and the United States.

The French painting movement of Fauvism emerged in the early 20th century as a way of expressing the emotion of the artist through the radical use of color. The 'wild beasts,' or Fauvists, included Henri Matisse and Albert Marquet. They were inspired by Post-Impressionist artists such as Paul Gauguin and by his push to use color to translate emotion into a painting.

Fauvist paintings are often painted with flat areas of color and paintings like Matisse's The Dance embody this idea. The movement of loosely associated artists started in 1903 and disbanded by 1908, making way for Cubism and Expressionism.

The Role of Chance in Dadaism

The New York School: Relationship to Europe & Place in the Art World