The government of ancient Persia oversaw the largest empire of the time. Explore the rise and features of the Persian administration, including the importance of the Persian relationship with their subjects. Updated: 11/01/2021
Create an account

Rise of the Persians

Unlike most other civilizations that rose to dominate Mesopotamia, the Persians were not originally from that region, nor any other major river valley. Instead, the Persians originated in modern Southern Iran, in a region today still known as Fars, from which the Greeks got the word Pars, ultimately becoming Persians. The official imperial history of Persia states that it grew out of oppression, as their long-time partners, the Medes, had become oppressive, and the noble Persians had simply risen up to throw off the yokes of such slavery. As a result, Persian writers would often have one believe that their culture tried to bring those same freedoms to others around the world. However, unlike so many other examples of nationalistic propaganda, this one may have some element of truth to it. 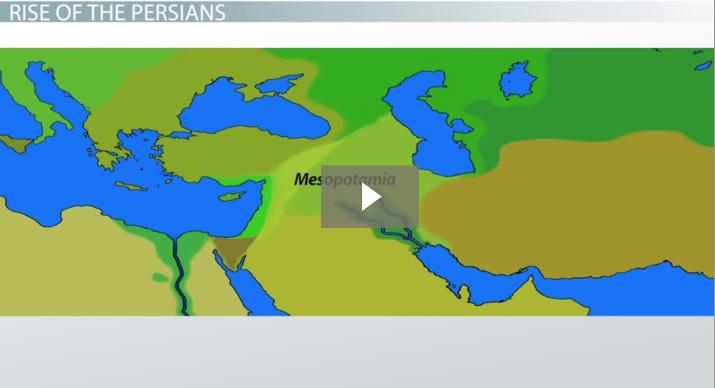 Coming up next: Ancient Persian Art and Architecture: History & Style

Until its destruction, the Persians were the largest empire that the world had seen up until that point in time. In fact, some scholars estimate that more than 40% of the world's population was under Persian rule during its high point. Earlier empires had failed with much less land for reasons of administration, so it was apparent that the Persians would have to be adept administrators in order to ensure the survival of their new empire. In this regard, the Persians were particularly gifted.

One of their most notable achievements was the construction of the Royal Road, which stretched from the Persian homeland west to the Aegean Sea. This permitted the quick transmission of trade, edicts, and armies across the width of the empire. Persian roads were augmented by the use of state-sponsored inns that dotted the countryside. Open to private travelers and officials on assignment, these inns guaranteed safety, a warm meal, and for officials, a change of horses to keep the message moving as quickly as possible.

Such communication was important as the Persians divided their empire into a number of provinces called satrapies, each governed by a satrap. These governors had considerable power, but a number of officials, especially military and financial officers, reported straight to the Persian Emperor, or Shahashah. Administration of the empire was also aided by the relative openness of Persian officials regarding language. Unlike later empires, which would attempt to forcibly impose language upon newly conquered regions, the Persians worked instead to figure out what languages were already common across a region, then use them instead. For this reason, the Persian Empire had two primary languages: Persian in the East and Aramaic in the West.

Relationship with the Subjugated

It wasn't just with language that the Persians strived to keep an open mind. Much of the Persian national myth depended on the fact that they had overthrown the rule of the oppressive Medes, and therefore it would be hypocritical for them in turn to oppress a culture. Again, this is rooted more in national myth than in reality, but was unique in the Near East, where most cultures were quite happy to admit openly that they wanted to wipe their neighbors from the Earth. Instead, Persians often framed themselves as liberators, freeing the inhabitants of Babylon from their brutal overseers, and sending the Hebrews back to Israel after their enslavement by Nebuchadnezzar.

This relationship as a protector of friends was very valuable to the Persians, and can be seen today even in their ruins. Whereas other cultures, most notably the Egyptians, would display their conquered offering tribute with subjects in chains, the Persians instead led their subjects, whether Babylonians, Indians, Arabs, or Egyptians, by the hand, without chains, and even in the weathered stone of the ruins, the friezes show glimmers of contentment. This, coupled with relatively great bounds of religious freedom, serves to demonstrate just how devoted the Persians were to the idea that they were ultimately a force for good in the world. Somewhat ironically, the original meaning of another term for this particular Persian Empire, the Achaemenid Empire, invokes the idea of sharing a mindset with a friend.

The Persian Empire was one of the largest in the world, and as a result required one of the largest bureaucracies in the world to rule it effectively. This was accomplished largely through the use work of satraps governing satrapies, which, in turn, relied on a road network and system of inns to provide for the most rapid communication possible. However, even the best of Persian intentions would have been much more difficult if not for the national myth that they were actually liberating peoples, as evidenced not only by the avoidance of chains in monumental art, but also the Persian attitudes towards religion and language.

By the time you have finished, you should be able to:

What is Salinity in Water? | Salinity Examples