The endocrine system uses hormones to manage many essential bodily functions, such as mood, energy levels, growth, and more. Explore the endocrine system and discover how its feedback loops and mechanisms function in the body, including the regulation of sex hormones. Updated: 10/09/2021
Create an account

Review of the Endocrine System

By now, you should have a good understanding of your endocrine system, which is made of hormone-producing glands that help regulate your energy levels, growth, emotions, ability to reproduce, and more. There are over a dozen glands that make up your endocrine system, including your pancreas, adrenal glands, thyroid, and pituitary gland. Hormones are important because they are substances that act as chemical signals in your body. They are like microscopic messengers, carrying important information with them as they travel through your bloodstream.

Hormones may be very small, but they are invaluable to you because the messages they carry help your body maintain proper functionality. You don't notice it, but your body is working all the time to maintain stable internal conditions. This stable internal environment is called homeostasis. The word originates from 'homeo' meaning 'similar' and 'stasis' meaning 'staying the same,' which very nicely describes what your body is trying to do all the time - maintain itself in a certain state!

Homeostasis refers to any number of regulated conditions in your body - temperature, calcium levels, immune health, blood sugar levels, and so much more. As you can imagine, this constant internal regulation takes a lot of work. 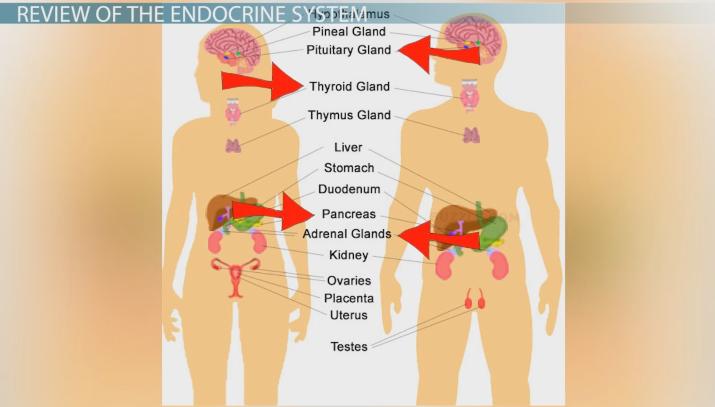 Coming up next: Retina: Definition & Function

Don't let these names fool you though - negative feedback is a very good thing when it comes to homeostasis. Your body does not often employ positive feedback because it doesn't like extreme conditions. Therefore, since negative feedback maintains appropriate conditions in your body, it's the most common type of feedback mechanism. Let's look at an example to see how this works.

Say you're driving down the road, daydreaming about what you'll have for dinner that night. All of a sudden, you see one of those electronic speed monitors, and it tells you that you are going way above the posted limit. This triggers a response from you - you slow down to match the speed limit, which we could call the 'target level.' Negative feedback in action!

Now, let's say that you see that same speed monitor, but instead of slowing down you slam your foot down on the accelerator to see just how far above that speed limit you can go. This is amplification of your speed away from the target level (the speed limit). Positive feedback in biological systems works the same way. Can you see why this wouldn't be a good mechanism for your body to employ when it comes to say, temperature or growth?

The reason we say 'negative' feedback is because what we're really talking about is a 'negative increase.' 'Positive' feedback, on the other hand, instills a 'positive' increase or output. It really has nothing to do with whether or not the feedback mechanism itself is good or bad; it just describes types of responses that occur.

Negative feedback regulation works much the same way in your body as it does on the road. For example, your pancreas (an important gland in your endocrine system) relies on negative feedback to regulate blood glucose levels. An influx of glucose, say from a carbohydrate-heavy dinner, triggers your pancreas to produce a hormone called insulin. Insulin's message to your body is to take up that extra sugar into cells in order to bring your blood sugar back to the target level. Once enough glucose has been taken up by your cells, your pancreas stops secreting insulin. It's negative feedback!

Negative feedback also helps you if your blood sugar gets too low. When this happens, your pancreas excretes a different hormone called glucagon. This hormone carries the opposite message of insulin. It tells your cells to release their glucose stores so that you can bring your blood sugar back up - again, to the target level.

Another important part of your endocrine system - your adrenal glands - regulates your responses to stress, sometimes called your 'fight or flight' response. When you encounter a sudden stressful situation, like a bear in the woods or a pop quiz in class, your stress hormones are triggered, and your body changes in some pretty drastic ways. Your heart races, you may get goosebumps, and your senses feel heightened and on alert.

The hormones from your adrenal glands that trigger these involuntary reactions also stimulate liver cells to release glucose. This influx of energy into your bloodstream gives your cells an extra boost for any suddenly needed cellular work, like answering pop quiz questions, or maybe just running away as fast as you can to avoid the exam altogether!

Regulation of your sex hormones is also controlled by feedback, and this regulation is more important than you may think. These hormones, such as estrogen, progesterone, and testosterone, are involved not only in reproduction, but also in growth and development. When these hormones aren't properly controlled, serious problems can occur. For example, too little growth hormone during childhood development can lead to dwarfism, while too much can lead to gigantism.

Feedback also regulates your internal body temperature, which is critical to cellular processes. Your hypothalamus, another important component of the endocrine system, sits above the roof of your mouth and tells your brain when you get too hot or too cold. If your temperature increases too much, your body is signaled to start cooling down (by sweating and other means) to try and get back to that target level. If you get too cold, the message is reversed, and your body starts working to heat you back up to your target level.

These are just a few of the processes that are regulated by feedback mechanisms in your endocrine system. You can see why this constant supply of information is important for proper short- and long-term cellular activity.

Next time you think about it, go ahead and thank your endocrine system for all the hard work it does behind the scenes to maintain a stable internal environment known as homeostasis. The endocrine system is comprised of hormone-producing glands that help regulate your energy levels, growth, emotions, ability to reproduce, and more. The best part is that this all happens without you knowing it!

The glands that make up your endocrine system rely on feedback mechanisms, which are responses that trigger other activities or processes. Different hormones, or substances that act as chemical signals in your body, are released from your glands and the messages they carry help regulate your body temperature, growth, blood sugar levels, and so much more.

Because negative feedback mechanisms attempt to maintain a target level, these are the most common type of feedback mechanisms employed by your endocrine system. An influx of glucose, a change in body temperature, or even a pop quiz all trigger reactions in your endocrine system so that you can go on doing what you're doing without skipping a beat.

After you finish this lesson you should be able to:

ATP & Muscle Metabolism | What Supplies the Energy for Muscle Contraction?