Feminine rhyme occurs when the second-to-last and last syllables in two words rhyme. Learn the definition of feminine rhyme and explore examples of this literary device in popular American songs. Updated: 10/09/2021
Create an account

Another pair of words that have a feminine rhyme would be 'sleeping' and 'creeping'. They have the same sound at the end, and the second to last syllable is what makes the rhyme. Because there are two syllables involved, sometimes feminine rhyme is called double rhyme. 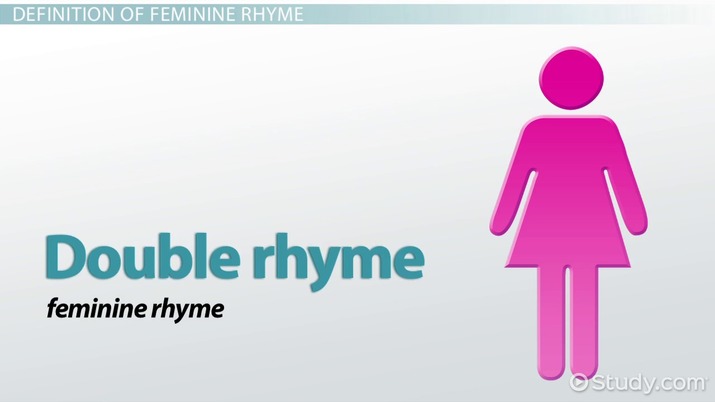 Some famous songs use feminine rhyme. Here's one:

Oh, say can you see by the dawn's early light
What so proudly we hailed at the twilight's last gleaming?
Whose broad stripes and bright stars thru the perilous fight,
O'er the ramparts we watched were so gallantly streaming?

In this one, the first and third lines end in a masculine rhyme - 'light' rhymes with 'fight.' The second and fourth lines have a feminine rhyme, 'gleaming' with 'streaming.' ('gleam' and 'stream' make a rhyme, and both words end in an identical 'ing' sound)

Spondee in Poetry Overview & Examples | What is a Spondaic Meter?

End Rhyme in Poetry Examples | What is End Rhyme?

Refrain in Poetry Overview & Examples | What is Refrain?

Blank Verse Overview, Use & Examples | What is a Blank Verse?