Feminism is a political and social movement, developed in waves throughout the 19th and 20th centuries, that advocates for equality between men and women. Explore the history, ideology, and impact that feminism had on politics, and explore the different types of feminism. Updated: 10/20/2021
Create an account

Francine is a politically active feminist. Feminism is a group of social theories, moral philosophies and related political movements that advocates social, political and economic equality between the sexes. Francine and other feminists want to ensure that women have all the same rights and opportunities as men, which has not been the case through much of history. In fact, women didn't get the right to vote in the United States until 1919 with the adoption of the 19th Amendment to the U.S. Constitution - well over 100 years after the Declaration of Independence, the United States Constitution and the Bill of Rights were penned. 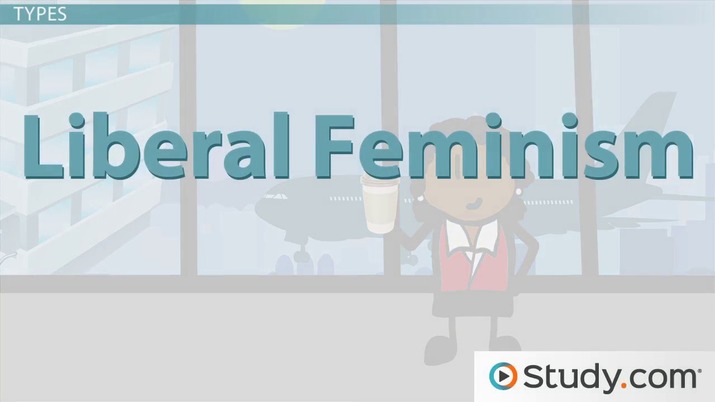 Coming up next: What is Government? - Definition, Role & Functions

The seeds of modern feminism were planted with the writings of Mary Wollstonecraft and John Stuart Mill. Wollstonecraft wrote the Vindication of the Rights of Women in 1792, which argued that women should have the same rights as men, including the right to education, earnings and property. John Stuart Mill, in his 1869 book, The Subjection of Women, also argued that women should have the same legal rights as men.

We can break the historical development of feminism into three different waves. Let's take a look at each.

Historians define the first wave of feminism as being from the middle of the 19th century to the early 20th century. The feminist movement during the first wave was primarily concerned with fundamental political rights, such as the right to vote; economic rights, such as the right to own property apart from a husband; rights to education and employment; and fairer marriage laws.

The second wave of the movement began in the 1960s. The focus of the second wave was for employment and reproductive rights. Some notable laws were passed during this period, including the Equal Pay Act; Title VII of the Civil Rights Act, which prohibited gender discrimination in employment; and Title IX, which prohibits discrimination in education. The landmark Supreme Court decisions of Griswold v. Connecticut, involving birth control, and Roe v. Wade, regarding abortion, greatly extended female reproductive rights.

Another key characteristic of third wave feminism is the recognition of the value of the feminine. For example, because of traditional feminine characteristics of nurturing and empathy, females are often superior at dispute resolution. Additionally, modern feminism is also about choice. Modern feminism believes that women should have the choice to pursue all the opportunities that are available to men but also have the right to choose 'traditional' roles as well. The key point is not what you choose to do but that you have the choice.

The new pluralism of the feminist movement has created different types of feminism. Let's take a look.

Feminism has had a broad and significant impact on many facets of life. Let's look at the United States as an example. The feminist movement has helped women achieve the right to vote, and now, women have held some of the most influential political offices in the country, including congressional representatives, senators, Secretary of State, Attorney General and Supreme Court Justice. Passage of the Equal Pay Act and other anti-discrimination laws were supported by the feminist movement.

Women often now outnumber men at colleges and universities. Family and marriage laws have gone through major reforms, and even some religions have started to ordain female clergy. Feminism has even affected our language. For example, we no longer use the term 'mankind' to indicate humanity but rather 'humankind.'

Let's review what we've learned. Feminism is a group of social theories, moral philosophies and related political movements that advocates social, political and economic equality between the sexes.

The modern feminist movement can be broken down into three distinct waves. The first wave was from the 19th to early 20th-century and was focused primarily on basic political, social and economic rights, including the right to vote, education, private property and marriage reform.

The second wave commenced in the 1960s and added reproductive rights to the movement's goals. The third wave is the current manifestation of the feminist movement, characterized by diffused interests pursued by different groups at the grassroots level. It's also about recognizing the value of the feminine and ensuring women can choose the path they wish to pursue in life unfettered by institutional, social and political obstacles.

Feminism is a movement comprising a variety of theories. You can generally break feminist theories into four broad categories, including liberal feminism, radical feminism, Marxist feminism and socialist feminism.

As you finish watching the lesson, try to:

Where to Find Primary Sources: Helping Students with Research

What is Feminist Theory? - Definition & Overview

Marxist Theory Summary & Criticism| What is a Marxist View?