This lesson explores feminist themes in Nathaniel Hawthorne's 1850 classic, 'The Scarlet Letter.' The lesson argues that the novel's protagonists, Hester Prynne and her daughter, Pearl, may rightly be viewed as early feminist heroines.
Create an account

It might seem strange to think of The Scarlet Letter, Nathaniel Hawthorne's 1850 masterpiece about an adulterous woman, as a feminist text, but that's exactly what it is. This is the story of Hester Prynne and her daughter, Pearl, and the punishment Hester endures at the hands of her Puritan community, a community seeking to purify society by fulfilling Christian doctrine on Earth, in 1640s Massachusetts Bay Colony. In this story, we get a unique view of women, love, sexuality, and sin. So what is it, exactly, that makes Hester Prynne an early feminist? 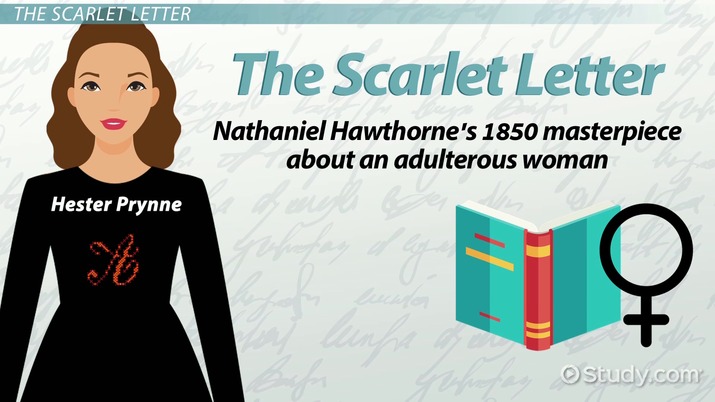 Coming up next: Nature in The Scarlet Letter

How far would you go to protect the person you love? What would you endure to defend that love? These questions lie at the heart of The Scarlet Letter, and they're why Hester can be viewed as an early feminist.

Hester is in love. But she's married to another man, Roger Chillingworth, whom she never loved, and who has been missing and presumed dead for years. Hester has another problem: the man she loves, Reverend Arthur Dimmesdale, is the moral center of the Puritan community they live in. As someone who is supposed to be the fulfillment of Christ's commandments on Earth, Reverend Dimmesdale, if discovered to have fathered a child with Hester, would face everlasting ruin.

When faced with punishment for her adulterous sins, Hester refuses to give Pearl's father's name, though her refusal guarantees that her own punishment will be multiplied. Hester shows herself to be far stronger than her lover, Dimmesdale, who can't acknowledge his sin. But the guilt eats him up inside. Dimmesdale grows frail, while Hester's strength seems only to increase with the years.

Hester's strength also manifests itself in the way she lives her life. When she is brought from the prison to the scaffold to be mocked and condemned by the entire community, she does not flinch, weep, or scream. She is stoic, though inwardly she wants to collapse.

Through the years, Hester Prynne faces endless taunts and ceaseless ridicule. She never retaliates. She carries herself quietly and calmly among a hateful community. Most important, no matter how the townspeople treat her, she is always there when someone is in need, serving the community in endless ways, from nursing the sick to feeding the hungry. She knows that when the need passes, she will be turned out of the house immediately, but she finds the inner strength to serve anyway.

The Puritans felt that the marital bed was a source of Heaven-approved enjoyment between man and wife. The marital bond was a divine contract, created and overseen by God. Anyone who tempted away a partner in this contract was flouting God. The Puritans considered women especially vulnerable to temptation, far more likely than men to be dangerously consumed by sexual desire; thus the need for men to keep women's sexuality tightly contained.

Hester Prynne's passionate nature seems to fulfill every dire warning against women's sexuality and intemperate hearts. Yet, Hester continues to love and desire Dimmesdale. She dreams of a life with him, if not in this world, then in the next. Her love is not the source of her pain. The source of her pain is that which forbids her love: the community's righteous judgment.

Hester believes Dimmesdale is her true husband, the man given to her by God, the one with whom she will spend eternity. Near the end of the novel, she plans to run away with Dimmesdale and Pearl to Europe, where they can live as a family, but Dimmesdale dies before this can happen. When Hester herself dies decades later, she is buried beside Dimmesdale, beneath a shared tombstone bearing only the letter 'A.'

Hester's daughter, Pearl, is wild, free-spirited, and impish, but innocent. For a time, the community fears Pearl's spiritedness. They call her the daughter of the Devil. But Pearl is simply free.

Born outside of law, God's commandments, and society, Pearl epitomizes liberty, unrestrained and undefined by social roles, especially female roles. Her very conception violated those roles and upset those requirements. Yet Pearl grows up strong, vibrant, and happy. She is not the demonic, disruptive force so many fear she will be. She is simply a joyous girl, gifted and beloved.

Among the most obvious examples of feminism in the novel, however, is the independent life Hester creates for herself and Pearl. Hester remains with her daughter among the Puritans who scorn her, but she builds her life on her own terms. This contrasts with the other Puritan women who are entirely dependent upon the male heads of the households. The man is to be the protector, provider, and priest of the home, something Hester and Pearl had to do without.

She supports herself and her daughter well through her exquisite needlework, which is so artistic, it becomes the fashion of the entire colony. This, too, contrasts with the Puritan women, for whom such creativity is forbidden as prideful and potentially sinful. For them, tradition and conformity reign.

Hester even refuses to remove the scarlet 'A' when the community gives her permission. Hester has come at last to define her morality on her own terms. Her heart, mind, and soul belong to herself and God, not the community.

This exemplifies an expression of feminism far ahead of its time because, in Puritan society, it is the patriarchal culture, rooted in Church teachings, that evaluates women's souls. Men, as the priests of the home, were to assess and ensure the purity of the woman's soul, and this often began by condemning the very desire Hester comes to embrace.

Nathaniel Hawthorne's The Scarlet Letter addresses feminist themes. In the story of Hester Prynne, Hawthorne explores the complex heart, mind, and soul of a woman. Despite facing lifelong punishment for the sin of adultery from the Puritan community in which she lives, Hester refuses to name her lover, Reverend Dimmesdale, proving her strength. Hester creates a stable, independent life for herself and her daughter, Pearl, and earns a measure of grudging respect from the community. The life Hester Prynne creates proves that even in the Massachusetts Bay Colony of the 1640s, a woman can lead a productive life, even raise a child, without a man's protection or help. Finally, Hester learns to define morality on her own terms. She eventually embraces the scarlet 'A' as an emblem of her love, her spiritual union with Dimmesdale, and the value of Pearl, the innocent life they created.

Romanticism in The Scarlet Letter

Allusions in The Scarlet Letter