This lesson will lay out for you when important body systems start to develop or begin to function as an unborn child develops trimester by trimester.
Create an account

Ah, the miracles of pregnancy and birth. They're a bit complex, they're convoluted, and not everything is understood very well, but we'll do our best in this lesson. The way a child comes to be can be broken down into trimesters, or a period of three months. We'll discuss the important changes the fetus undergoes inside the mother's womb as pregnancy progresses, namely, when important body systems develop. 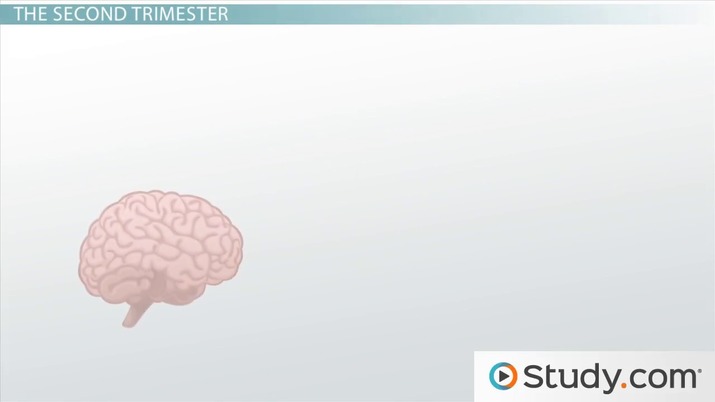 Coming up next: Prenatal Care: Nutrition

The development of a fetus begins right when the woman's egg is fertilized by a man's sperm. At this point, the thing that will become a child is actually called a zygote, but we'll keep things simple for our lesson. After this fertilization occurs, the future child has all of the DNA it needs to develop. Half of the DNA comes from the mom's egg and the other half comes from the man's sperm. The DNA is akin to computer code that drives development. Anyways, during the first trimester, the following cool and important things happen:

The cardiovascular system starts to take shape as well. This includes the heart, blood, and blood vessels. During the first trimester, the heart develops four chambers, blood vessels start to evolve, and blood cells begin to form. The fetal heartbeat can be detected during the first trimester as well. The cardiovascular system is like the pump and pipes that push water around your house to supply your every need, from cooking to showering.

Additionally, the musculoskeletal system evolves. The musculoskeletal system includes the muscles and bones of your body. The skeleton is like the framework of your home, while the muscles are all the drywall, bricks, and what not covering that framework. At first, little structures called limb buds appear. They then turn into the arms and legs, and by the end of the first trimester, the fetus even has little fingers and toes that are visible. The head and trunk of the body also take shape during this time, and joints, places where bones meet, allow for some body movement as well.

Furthermore, the eyes and ears start to form. Other major body organs, including the lungs, stomach, liver, and intestines, start to take shape. External genitals begin to take root.

During the second trimester, a fetus continues to develop and grow quite a bit. All facial and body features become recognizable at this point. The fetus can also blink, kick, and grasp like Bruce Lee. By the second trimester, all structures and body organs have been formed, but aren't fully functional, like the kidneys and lungs. The kidneys are the things that help to filter your blood like a filter for your water. Because the kidneys aren't fully functional, the little fetus inside the womb still depends on mom to get rid of harmful substances.

The fetal brain grows even more quickly at this point, the skin develops sweat glands, the nails grow to their full length, and even fingerprints appear so police can stop your baby if it does something wrong! The skeleton becomes more recognizable and the first evidence of layers of fat comes about.

What's really neat is that during the second trimester the fetus will be able to hear its mom breathing and talking. Thus the auditory, or hearing, system becomes functional at this point. During the second trimester, it is also possible to determine the sex of the child using ultrasound examination and hear the fetal heartbeat with a stethoscope.

By the third trimester, the visual system begins to function. This means the unborn fetus can open and close its eyes and perceive light. Importantly, it is at this stage of pregnancy the respiratory system, the trachea, lungs, and diaphragm, becomes functional and allows for a baby to breathe when they're born.

During the third trimester, the fetus gains a lot of weight, connections between brain cells increase, and it has a ton of reflex behaviors at its disposal. These are behaviors that babies are born with and do not learn. They are born with them to ensure their survival after birth. One good example of this is the sucking reflex that ensures that a baby feeds as soon as something stimulates the area around their mouth.

During the second trimester:

The third trimester brings out the proper function of the visual system and the respiratory system, the trachea, lungs, and diaphragm. The fetal nervous system also becomes mature and includes a whole host of reflex behaviors, like the sucking reflex, which promotes its survival after birth.

By the end of this lesson you should be able to discuss the major fetal developments that take place in the various body systems and organs per trimester during pregnancy.

What is a C-Section? - Procedure, Types & Delivery

What Is Menstruation? - Definition & Cycle

What is Conception? - Definition, Ovulation & Symptoms