View bio
Ancient China built its society on commoners, nobles, and emperors. Learn about the feudal structure of China and the ranking of peoples in this lesson. Updated: 12/22/2021
Create an account

Imagine you could be anyone in the world--a president, an astronaut, or a rock star. While the odds may be long, it's possible to work hard and achieve your dreams, but for many ancient societies people only could go as far as what their parents and grandparents did. That's because many cultures had a hierarchy, a ranking of people according to their social status and responsibilities.

In the case of ancient China, that society followed a hierarchy called feudalism. Feudalism divided society into three different categories: emperors, nobles, and commoners, with commoners making up the vast majority of the population. 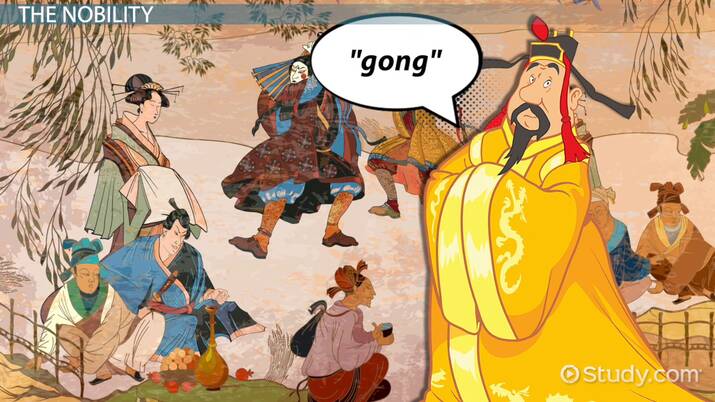 Coming up next: Farming in Ancient China: Lesson for Kids

If you got to be in charge of an entire country, what would be the first thing you'd do? Maybe fill a swimming pool full of ice cream! In ancient China, the emperor had lots of power and lots of money, making him capable of doing just about anything that he pleased.

People believed that the emperor received his authority from Heaven itself, meaning that nobody questioned his actions (at least not to his face) and that everyone in China had to serve him. Almost all the emperors were men. Only one woman in all of Chinese history managed to become an empress: Wu Zetian, who helped build a massive castle called the Wild Goose Pagoda.

The emperors couldn't control all of China on their own, however. They needed the help of the nobility in order to govern, collect taxes, and keep the population in line.

If you were lucky enough in ancient China to be born to a rich and powerful family, you had a lot of advantages. The nobles who had the most power in China, known as the ''gong,'' enjoyed privileges because they could trace their family or ancestors to the emperor himself. Only members of the emperor's extended family could be ''gong'' lords and they received the most land, servants, and wealth.

Chinese nobles had their own hierarchy: the ''gong'' sat at the very top, while the ''nan'' had the least amount of land and power. Nevertheless, being at the bottom of the lordly ladder is still better than being a commoner.

The majority of the people in ancient China had no land, wealth, or power. They might have been peasants, farmers who grew crops such as rice or raised animals, or workers who made, repaired, or sold everyday objects like clothes and tools. These workers may also have labored on larger projects, such as the Great Wall of China.

At one point, the emperor needed a million workers on the Great Wall, and many would die in the harsh construction. At the very lowest rung of the ladder for Chinese feudalism sat the servants and slaves, who had very tough tasks with almost no chance of improving their lives. Servants might have gotten paid a small amount, but slaves had to do whatever their masters wanted without any reward.

In ancient China, feudalism divided society into three different categories: emperors, nobles, and commoners, with commoners making up the vast majority of the population. The hierarchy of ancient China had an order for everyone, from emperor to slave.

While those at the top had money and the opportunity to do what they wanted, those at the bottom might be peasants, who were farmers who grew crops such as rice or raised animals; or workers who made, repaired, or sold everyday objects like clothes and tools; and workers who had no choice but to continue their parents' and grandparents' duties.

Prompts About Feudalism in Ancient China for Kids:

Provide the definitions of all of the terms that are in bold from the lesson (hierarchy, feudalism, peasants). Each definition should be one to two sentences in length.

Example: Peasants were farmers or workers.

Make a chart or some other type of graphic organizer that lists the order of the societal hierarchy in ancient China. Be sure to include sub-categories of each level. (For example, a "nan" was the lowest type of noble.)

Example: Slaves were at the bottom.

In one paragraph, write an essay that explains the powers of the emperors in ancient China and how people thought emperors got these powers. Your essay should also answer the following questions: Who was Wu Zetian? What did Wu Zetian do?

Example: In ancient China, people believed that emperors received their powers from heaven.

Write an essay of one paragraph that describes the structure and roles of the nobility in ancient China.

Example: Members of the nobility helped the emperor collect taxes.

Unification of Northern China by Shi Huangdi | Who was Qin Shi Huang?

The Decline of Confucianism and the Republic of China

Darius the Great Overview & Quotes | Who was King Darius?

Communism in China Factors & Rise | How Did China Become Communist?