Erin has taught college level English courses and has a master's degree in English.

Walt Whitman wrote the poem 'O Captain! My Captain!' as an ode to President Abraham Lincoln after his assassination. Explore the figurative language in this poem, which includes metaphor, imagery, apostrophe, synecdoche, and allusion. Updated: 12/23/2021
Create an account

In this lesson we'll look at some of the examples from Walt Whitman's stirring poem 'O Captain! My Captain!', a poem about his feelings on the Civil War era of the United States. Let's take a closer look to see how Whitman uses figurative language to achieve a moving effect in his poem. 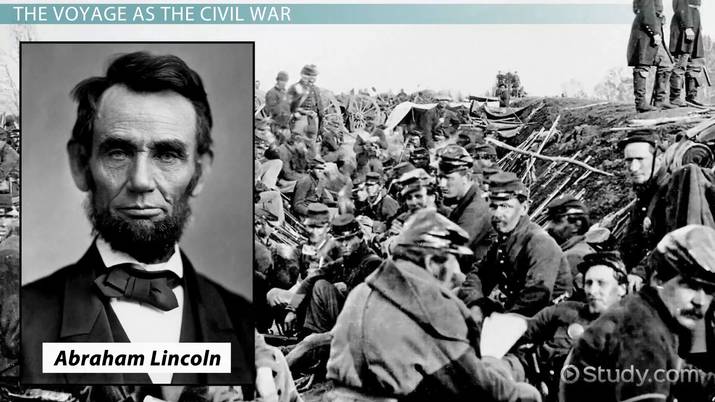 Coming up next: Figurative Language in Stopping by Woods on a Snowy Evening

Definition of a Metaphor

Metaphor is a figurative language that implies comparison between seemingly unlike things. The entire text of 'O Captain! My Captain!' functions as an extended metaphor to honor his subject, Abraham Lincoln. The poem is an ode to the president written after his assassination. Let's break down the metaphor to its main parts.

The Captain as Lincoln

In Whitman's metaphor, Lincoln is the captain in the poem. The captain has seen his ship through tough times but ultimately is successful, returning home to a hero's welcome. Sadly though, the captain has 'fallen cold and dead.' The captain lies on the deck of the ship, implying that he died while at his post. The comparison to Lincoln is clear: Lincoln also died at his post, that is in the middle of his presidency.

The Voyage as the Civil War

The Ship as the United States

The captain's ship has been through tough times, having 'weather'd every rack.' The ship is a metaphor for the United States, which has been battered with heavy loss of life and property during the Civil War. Despite the difficulties, the ship is ultimately 'anchor'd safe and sound.' The United States have stayed together, and having passed through the war, are safe again.

Imagery is another type of figurative language. Any time a poet uses language that appeals to the reader's senses, he or she is using imagery. Whitman uses it to great effect in this poem. There is a sense of celebration in 'O Captain! My Captain!'; we can almost hear the bells pealing, the people 'exulting' and the 'bugle trills.' We can feel the crush of bodies all around in 'the swaying mass,' the people all 'a-crowding.'

But not all of the imagery is happy. We also have the stark image of the fallen captain on the deck. We see the 'bleeding drops of red' and the captain's 'lips. . . pale and still.' The vivid description paints a picture of the pale, unmoving captain in sharp contrast to the bright, red blood.

Definition of the Apostrophe

Whitman begins his poem with an apostrophe when he writes, 'O Captain! My Captain!' Apostrophe is another facet of figurative language. It involves a writer addressing a dead or absent person, an inanimate object, or an idea. In this case, the poet speaks directly to the deceased captain. The purpose of an apostrophe is not to elicit a response from the addressee, but to stir up emotions in the reader. The poet's impassioned cry to the noble, dead captain is an example of that appeal to emotion.

Definition of a Synecdoche

Another example of figurative language in this poem is the use of synecdoche. Synecdoche is using a part to represent a whole. In this particular poem, Whitman uses synecdoche when he describes the cheering crowd around the ship. This small group stands for the larger group of all Americans who are relieved and elated that the war is over. The crowd is cheering for their fallen leader ('For you they call'), which stands for the connection that Americans feel to Abraham Lincoln.

Definition of an Allusion

One of the more obvious examples of figurative language in this poem is its use of allusion. Allusion is a reference to something that most readers will know about. In 'O Captain! My Captain,' the allusion is to Lincoln's recent assassination. The image of the bloody captain references the gunshot wound that killed Lincoln.

Walt Whitman's 'O Captain! My Captain!', his poem relating his feelings on the Civil War's effect on the United States, is rich in figurative language, which is an umbrella term to describe many different techniques that bring flavor and life to writing. The entire poem is an extended metaphor, or figurative language that implies comparison between seemingly unlike things, for the United States after the Civil War and Abraham Lincoln's assassination. In the metaphor, the captain is Lincoln, the voyage is the war and the ship is the United States.

The poem also contains examples of imagery, or language that appeals to the senses. This imagery allows us to hear the sounds and feel the crush from the celebration of the crowd. It also paints a picture of the dead captain. 'O Captain! My Captain' also contains apostrophe, or when a writer addresses a dead or absent person, an inanimate object, or an idea, as evidenced by the way the poet addresses the deceased captain to elicit an emotional reaction from the reader.

Synecdoche, or using a part to represent a whole, is also present in the cheering crowd that represents the whole of America. Finally, the figurative language of allusion, or a reference to something that most readers will know about, is at work here, since the dead, bloodied captain is a reference to the recently shot Abraham Lincoln.

Through the Looking Glass by Lewis Carroll | Background, Plot & Characters

Through the Looking Glass by Lewis Carroll | Plot, Themes, & Analysis

Linda in Death of a Salesman: Character Analysis