Erin has taught college level English courses and has a master's degree in English.

'Stopping by Woods on a Snowy Evening' is one of Robert Frost's most well-known poems, in large part because the language Frost uses creates such a beautiful, vivid image. Explore Frost's use of figurative language in this famous poem, including his use of symbolism, synecdoche, hyperbole, imagery, alliteration, and personification. Updated: 12/22/2021
Create an account

What Is Figurative Language? 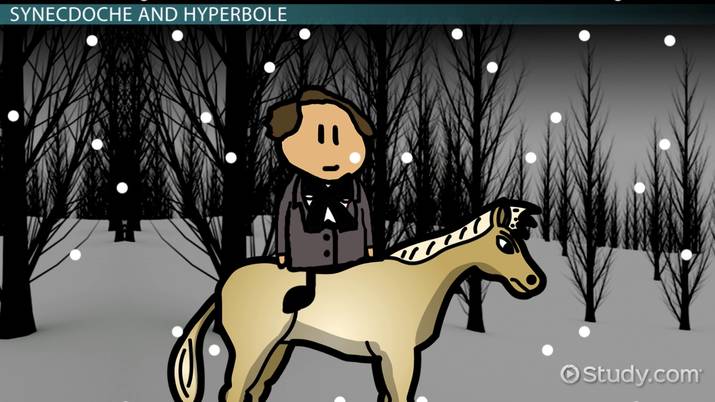 Coming up next: Figurative Language in Nothing Gold Can Stay

Symbolism is figurative language that enhances literal things with symbolic meaning. 'Stopping by Woods on a Snowy Evening' is full of such symbols. In the poem, the poet and his horse go through snowy woods. The owner of these woods has a house in the village, but the poet is nowhere near it. Instead he is surrounded by nature, stopped 'without a farmhouse near.' The village and farmhouse can be seen as symbols of society and civilization. The lonely journey of the poet or rider might symbolize the journey of an individual through life. The dark woods that surround the poet are often interpreted as symbols of death.

Synecdoche (say that three times fast!) is another facet of figurative language. It involves using something small to stand for something much larger. We've already talked about the poet's journey as a symbol of life's journey. As such, we can also read this as a synecdoche. By presenting the narrow viewpoint of one individual, Frost is able to explore something much larger and central to the human condition.

Hyperbole is exaggeration to emphasize a point. We see an example of this in Frost's poem. When the poet tells us the 'woods fill up with snow,' we know that there isn't literal snow reaching to the tops of the trees. This exaggeration has the effect of emphasizing just how completely the landscape is blanketed with snow. The reader can get a real sense of where the poet is and what he sees all around him.

Speaking of what the poet sees, this is another part of figurative language - imagery. Contrary to how it sounds, imagery doesn't just have to do with seeing. Imagery appeals to any of the five senses, and this poem is full of examples. We have the imagery of the white snow covering the ground and trees. We also can picture the sight of the 'lovely, dark and deep' woods.

We can hear things, too, like the tinkling harness bells of the horse. The poet explicitly tells us about the other sound: 'the sweep/Of easy wind and downy flake.' The language makes it easy for us to hear and feel the gently whistling wind. Words like 'frozen,' 'dark,' and 'snow' also contribute to the chilly feeling. Reading the poem, one practically feels the need to pull on a sweater.

Alliteration is a wonderful way to wake up the reader. (See what I did there?) That first sentence was itself an example of alliteration, which is the repetition of beginning consonant sounds in words that are close to each other. This poem provides many examples, such as:

'His house is in the village though;

He will not see me stopping here

To watch his woods fill up with snow.'

'The only other sound's the sweep'

'He gives his harness bells a shake'

Notice how the alliteration produces a pleasing effect to the ear when the poem is read aloud. It makes the poem more musical and easier to memorize.

Personification is another aspect of figurative language, in which inhuman things (objects or animals) are given human attributes. In this poem, the horse is personified. The poet tells us 'My little horse must think it queer/To stop without a farmhouse near.' When was the last time a horse thought something was queer? Or thought anything a human might think, for that matter? This is a clear example of personification, and we see it again when the horse shakes his harness bells 'to ask if there is some mistake.' The personification of the horse in this poem gives the horse a character and helps the reader imagine him more vividly.

Robert Frost's poem 'Stopping by Woods on a Snowy Evening' is rich in figurative language. It contains symbolism. The village, the journey and the woods symbolize civilization, life's journey, and death, respectively. The poet's journey standing for the journey of all people is an example of synecdoche, where a part stands for a whole. Frost uses hyperbole, or exaggeration for emphasis, when he refers to the woods 'filling up' with snow. Imagery also abounds in this poem. Frost appeals to the reader's senses with various descriptions of the landscape, the sounds of bells and wind, and the feeling of cold. He also uses alliteration, which is the repetition of a beginning consonant sound in nearby words. Finally, Frost uses personification in his description of the horse, who thinks and asks questions like a human.

Stopping by Woods on a Snowy Evening by Robert Frost | Summary, Analysis & Theme

Figurative Language in The Road Not Taken

How to Draw Conclusions from a Passage

I Wandered Lonely as a Cloud: Imagery & Themes

A Tale of the Oki Islands: Lesson for Kids

Figurative Language in Nothing Gold Can Stay

Robert Frost Poetry Analysis | The Road Not Taken & Other Poems

The Road Not Taken: Symbolism & Analysis