The Financial Panic of 1873 was one of the most disastrous economic collapses in the United States. Explore the beginning of the Panic of 1873, the financial collapse and what caused it, the impact on America, the public dissent, and how the economy rebounded. Updated: 09/12/2021
Create an account

The Beginning of the Financial Panic of 1873

Following the Civil War, the United States experienced a period of economic growth that was unmatched in its brief history. Employment rose substantially thanks to a remarkable business boom. Most of the economic success in the post-war years is attributed to the construction of railroads. Between the end of the war and the beginning of the financial collapse, railroad companies had laid over 30,000 miles of track, which included the major project of linking the Union Pacific and Central Pacific via the transcontinental railroad. When the aforementioned project was completed in 1869, investors began looking for an additional railroad project to invest in. This was the doomed Northern Pacific. 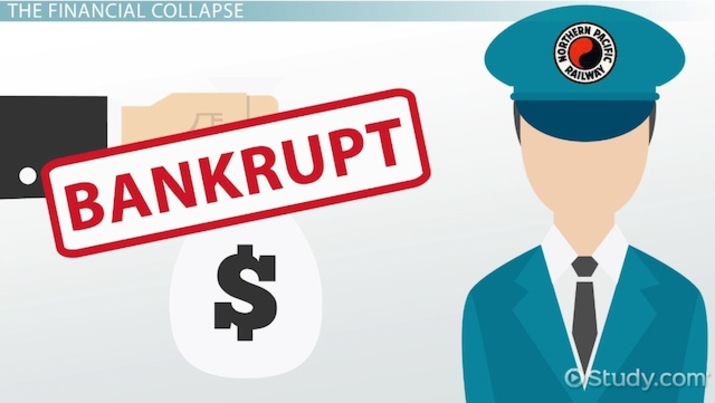 It is safe to use the word unprecedented when discussing the financial collapse of the United States in 1873. There had been a series of economic downturns before (1837, 1857, and 1869), but nothing as far-reaching as this event.

Concisely, most financing firms in the United States invested heavily into the building of the Northern Pacific. Unfortunately, the firms ran out of capital and declared bankruptcy, which crippled the financial system of the United States.

Jay Cooke and Company of Philadelphia was the leading financial firm involved with the building of the Northern Pacific line. This was an organization that recorded great success as a Union bond marketing firm during the Civil War. The federal government rewarded the firm with the second transcontinental railroad for its reputable work. Cooke and Company managed to acquire upward of $100 million in investment bonds from European nations and private investors. Additionally, major banking institutions and public investment firms in the nation poured equity into the endeavor in the hopes of making a major profit. Unfortunately, Cooke and Company did not realize how large of an investment was needed in order to build a rail line (the land needed to be cleared, tracks needed to be laid, etc).

On September 18, 1873, Jay Cooke and Company realized it had exhausted its money as well as the money of its investors. The financial firm closed and immediately filed for bankruptcy. The banks and businesses that invested in the Northern Pacific project also proceeded into bankruptcy. The financial sector of the United States was in serious peril.

Impact on the United States

Ripples of the financial panic caused by the Cooke and Company firm were felt immediately throughout the nation. The stock exchange was ordered to shut the system down for a period of two weeks, suspending commodity trading and paralyzing the economy. Additionally, it is estimated that upward of 100 railroad companies suffered immediate bankruptcy. Railroad employees were laid off in droves. Around 20,000 businesses that had invested in the project were forced to close their doors within five years of the financial meltdown. The most frightening aspect was the rapid increase in unemployment. By the end of the decade, roughly 14% of American workers were furloughed.

The federal government did not have a solution for the rapid financial meltdown that emerged. President Ulysses S. Grant ordered a purchase of governmental bonds, but the effect was minimal.

Individuals who were terminated due to the financial collapse of the Northern Pacific project, coupled with workers who were on strike due to pay cuts, took to the streets in protest. During 1877, one of the most volatile years in United States history, violent riots were ignited in major cities such as Baltimore, MD, Martinsburg, WV, Chicago, IL, and Pittsburgh and Reading, PA.

Formally known as the Railroad Strikes of 1877, former and current workers clashed with the railroad 'scabs,' businesses owners and even federal troops. Dozens of Americans were injured or killed. Despite the widespread clashes, the economy still struggled to rebound.

It would take over five years for the United States economy to rebound from the devastating financial collapse that took place in 1873. Democrats were able to take over a majority in Congress thanks to the prevailing distrust of Americans toward the Republican Party (Grant was a member of the Republican Party) and were able to enact regulations involving speculation that hoped to prevent another financial panic. New oversight, rebuilding the railroad industry and new investments in the economy eventually curtailed the financial depression of the 1870s.

The Great Railroad Strike of 1877 | Uprising, Cause & Effects

How did The Civil War End? | Civil War Timeline & Surrender

The Omaha Platform of 1892: Definition & Goals

Redeemers in Reconstruction History & Explanation | Who Were the Redeemers?