Copyright
Lesson Transcript
Instructor: Christopher Haines
The asymptotes of a function can be determined based on the limits of the given function. Learn about the different types of asymptotes and how to find the asymptotes of a given polynomial function. Updated: 12/14/2021
Create an account

To begin this topic, we first define all types of asymptotes.

These limits can be one-sided or two-sided.

A horizontal asymptote is a special case of a linear asymptote. This is the case of a = 0.

So, as we've seen with these three types of asymptotes, the concept of an asymptote (whether vertical, horizontal, or linear) is a function moving along a line in the limit as x approaches a finite number or positive or negative infinity. In the examples that follow, we're going to use the method of limits to locate asymptotes of various functions. 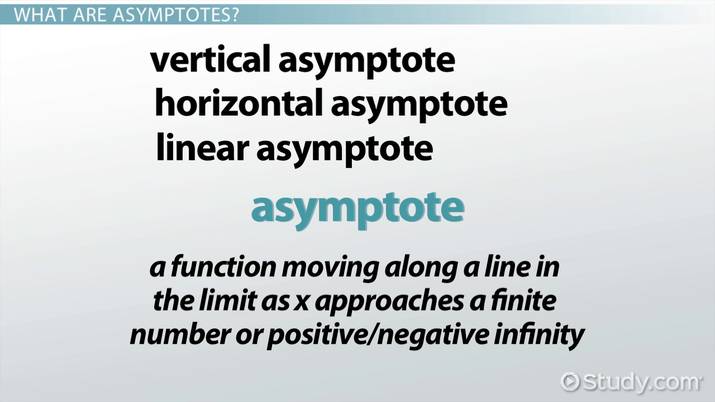 Coming up next: Comparing Relative Magnitudes of Functions

Here's our first example: Find all asymptotes for the function:

You can sketch the function by using a graphing calculator.

By dividing the numerator and denominator by x, we can evaluate the limit as x approaches infinity:

In accordance with Definition 3, f has a horizontal asymptote at y = 0, and it has it in both directions towards positive and negative infinity.

Now note that by factoring the denominator, we can rewrite the function as:

With the function expressed this way, it becomes apparent that there are two suspects for vertical asymptotes. This is because x = -1 and x = 1 give a zero in the denominator. So we investigate these two points further and also be mindful of which side we are approaching each of the two points.

The one-sided limits are as follows. When x < -1, all three of the factors (numerator and denominator combined) are negative. So therefore:

Similarly for the other candidate,

The graph of the function is shown in Figure 1. The asymptotes in the plot are consistent with our calculations. However, sketching the plot in its entirety (without a graphing utility) is outside the scope of this lesson.

Here is our second example: Find all asymptotes for the function:

Note that this function is really the same as

We can obtain the latter expression upon multiplication on the numerator and denominator by exp(x). Clearly,

So the function has two horizontal asymptotes: one for each direction of positive and negative infinity. They are y = 0 and y = -1.

Since the denominator is zero when x = 0, the only candidate for a vertical asymptote is x = 0. We will need to consider both one-sided limits as x approaches zero.

It is clear from these last two observations that x = 0 is a vertical asymptote. The plot of this function is shown in Figure 2.

Now here's our third example: Find all asymptotes for the function:

Again, we have to sketch using a graphing calculator.

And here's our solution:

Let's begin by noticing that x = 2 is a candidate for a vertical asymptote. Evaluating the one-sided limits there, we see that:

Now note that we can rewrite the function as (completion of square):

This implies upon substitution:

Therefore y = x + 2 is a linear asymptote, and we would have the same result if we let x tend to negative infinity. (Same argument.)

A sketch of the graph is shown in Figure 3. Included on the graph is the plot of y = x + 2. The function's graph becomes closer to the line y = x + 2 as x tends to positive and negative infinity.

Let's take a couple of moments to recap the essential information about asymptotes and how to find them that we learned in this lesson. An asymptote for a function indicates that the function is close to linear as x approaches a finite number or positive or negative infinity. Asymptotes can be horizontal, vertical, or a line pointed in any direction.

If the denominator for a function is zero at a point, then it's possible that the function has a vertical asymptote at that point. Finding a horizontal asymptote amounts to evaluating the limit of the function as x approaches positive or negative infinity.

Finding a linear asymptote may require a bit more algebra, since it's along the line y = ax + b, although the first clue isn't nearly as complicated. For instance in Example 3, the numerator is a quadratic function, and the denominator is a linear function, so the difference in degrees is one, suggesting that for large x, we are basically looking at a polynomial of degree one (a linear function). We could have had a fourth degree polynomial divided by a third degree polynomial, and then we'd be seeking the same type of asymptote. Only the algebraic work would differ.

What is the Addition Rule for Limits? - Definition & Overview

Approximating Limits on a Graphing Calculator

Limit of a Function | When Does a Limit Not Exist?

How to Find the Domain of Piecewise Functions

Derivatives Formula & Examples | How to Find a Derivative

How to Find Critical Points of a Function