Tammie has taught elementary school for 14 yrs. and holds an MA in Instructional Technology

The First Continental Congress was a meeting of colonial representatives in response to the Intolerable Acts. Attend this event, meet great American historical figures, and learn how the colonies decided to retaliate against the British. Updated: 01/03/2022
Create an account

The American colonies had had enough! It was time for a united front, so a meeting was called. A meeting of great importance, a meeting that would change the course of history for the colonies. This meeting was known as the First Continental Congress, and it would put into motion the creation of a new country.

It's 1774, and the British government has just passed a series of laws intended to punish the American colonies called the Intolerable Acts. Britain was angry about the throwing of British tea into Boston Harbor, so it used these laws as retaliation! The colonists were fed up, which is why they called these laws 'the Intolerable Acts.' It was time to call the colonies together in a secret meeting to figure out how to respond to the British government. Would they choose words, or was it time to go to war? 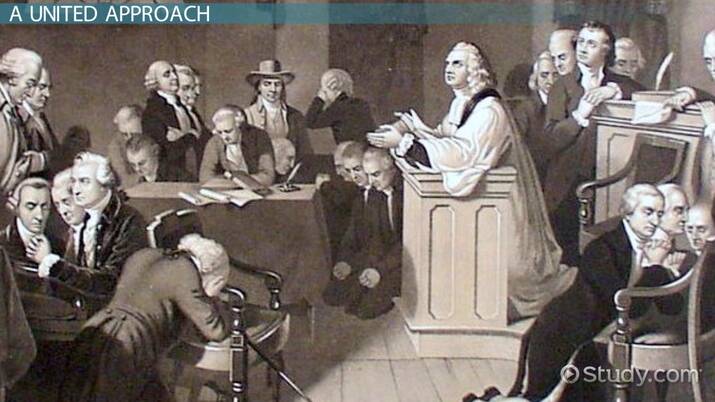 Coming up next: Battle of Saratoga Summary: Lesson for Kids

On September 5, 1774, delegates (which in this case, were representatives from 12 of the 13 colonies) had their first meeting in Philadelphia to discuss how the colonies should respond to the Intolerable Acts. Only Georgia didn't send a representative. The meeting, called the First Continental Congress, collected together some of the greatest leaders and debaters of the colonies. Historical powerhouses such as John Jay, John Adams, Samuel Adams, George Washington and Patrick Henry came together to develop a plan of action.

The debates were heated, and there were many disagreements about how the colonies should respond. Some delegates were ready for all-out war with Britain, but others wanted a more peaceful approach. After seven weeks of intense discussion, the delegates made three important decisions.

The first item passed by the delegates was the Articles of Association. This document suggested a boycott, or ban, to begin on December 1, 1774, on all trading with Britain. This ban was to stay in place until Britain repealed the harsh laws against the colonies. The document also stated how the colonists should live during this ban. You see, this ban would greatly affect the money and products coming into the colonies. This meant the colonists were headed toward hard times financially! It gave pointers, such as not spending money on expensive entertainment!

The British were given until May 1775 to get their act together and do away with the Intolerable Acts. The delegates agreed that if Britain did not repeal the acts, then the delegates would meet again. On October 26, 1774, the delegates headed home, some with the hope of peace on their hearts, others with the certainty that war was just around the corner!

Some of the historical greats in American history became delegates to this secret meeting. The delegates, which were representatives from 12 of the 13 colonies decided to stop all trade with Britain, send a letter of declarations to King George, and promised to meet again if their demands were not met.

Who Was Involved in the Boston Tea Party? - Lesson for Kids