Stephanie has a master's degree in Physical Chemistry and teaches college level chemistry and physics.

In this lesson, we'll talk about first-order reactions like radioactive decay. We'll use the mathematical descriptions of these reactions to discuss their behavior.
Create an account

How can scientists use uranium deposits to date the age of the earth? No one was alive back then - there weren't even bacteria! Well, it turns out the radioactive decay of Uranium-238 is very predictable and can be described mathematically, using first-order reactions.

The rate of reaction, or reaction rate, is the speed at which a reaction progresses. We define this mathematically by measuring the rate at which reactants disappear or products appear, where rate is defined as a derivative with respect to time. In this lesson, we're concentrating on first-order reactions. Because first-order reaction rates only depend on the concentration of one reactant, we can define the rate of these reactions as the rate of disappearance of this reactant.

Rate laws are equations that mathematically describe this rate. Knowing which variables determine the rate of reaction allows us to draw useful conclusions about that reaction. In this lesson, we'll look at first-order reactions, which depend only on the concentration of one reactant. We'll then use this rate law to derive an equation for the half-life of the reaction. 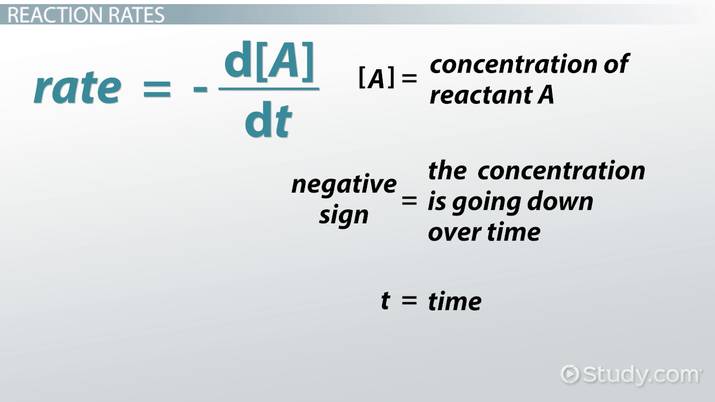 Coming up next: Rate Constant and Rate Laws

We can turn a proportion into an equation by multiplying by a constant. This constant, k, is the reaction rate coefficient.

Then, plugging the definition of rate from the previous section into our rate law gives us the differential rate law.

Starting with the differential rate law,

Then we can integrate each side of the equation:

Once we do that, it will give us the integral representation of the rate law:

With a bit of algebra, this can be represented in another way as well:

If we plug this into our integrated rate law we would get the following equation for the half-life:

We can see from this equation that the half-life is only dependent on the reaction rate coefficient, k, which is a constant. This means that the amount of time it takes to reduce the reactant by half is not concentration-dependent. If we start out with 100% of reactant A, it takes the same time to go from 100% to 50% as it does to go from 50% to 25% and from 25% to 12.5%. We can plot this behavior for carbon-14, which has a half-life of 5,730 years:

Notice that the amount of carbon-14 never quite reaches zero - every 5,730 years, it halves again! Uranium-238 has a half-life of nearly 4.5 billion years! This is why it can be used to date the earth. Looking at how much Uranium deposits on Earth have decayed gives us a good idea about the age of the earth.

When solving a problem like this, we begin by looking at what is given or known:

If the half-life of carbon-14 is 5,730 years, then we can determine k for carbon-14 from our half-life equation we just looked at:

We can then insert the known quantities into the integral representation of the rate law. When solving problems, it's best to choose the version of the equation which is easiest to solve. In this example, we want to use the equation without a natural log. Note that we can cancel out the units of time in the exponent:

Let's briefly go over what we've learned one at a time.

Rates of reaction, or reaction rates, are the speeds at which a reaction progresses. First-order reaction rates are only dependent on the concentration of one reactant.

This relationship can be expressed in:

This rate law also results in a half-life, or the time that it takes to reduce the concentration of a reactant by half, that isn't concentration-dependent:

Half-lives can be a powerful predictive tool for first order reactions. They're most often used in radioactive decay applications which can range from short-term medical use to long-term geological application.

Emulsion Examples | What Does Emulsify Mean?

Acid-Base Buffers: Calculating the pH of a Buffered Solution