First person narrative is a point of view (who is telling a story) where the story is narrated by one character at a time. This character may be speaking about him or herself or sharing events that he or she is experiencing. First person can be recognized by the use of I or we.

In first person, we only see the point of view of one character. While this character may share details about others in the story, we are only told what the speaker knows. An author may switch from character to character, but still use first person narrative. This way, we may learn about what other characters think and feel, but we are still limited in our knowledge because we must rely on what the character shares.

There are many different ways that an author may use first person narrator. There may be an interior monologue, an inner voice or stream of consciousness. There may be a dramatic monologue, a poetic form where a speaker reveals him or herself. There might be a plural first person perspective, where an author would represent a group. Finally, there might even be a peripheral narrator, a first person narrator that is not a main character. 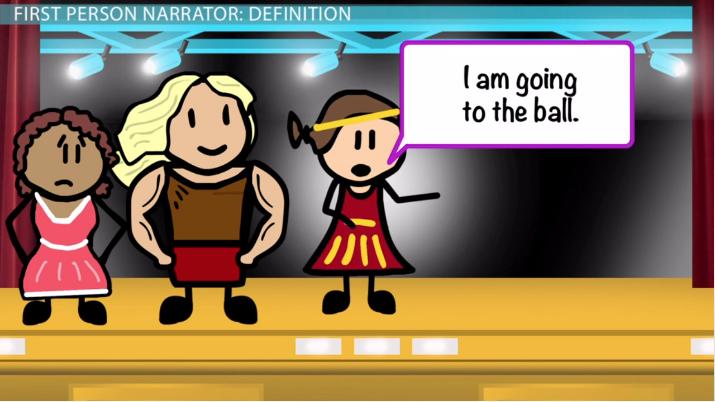 Try it now
Back
Coming up next: J.K. Rowling: Biography, Books & Facts

First person narrator is very common in literature. Anytime that an author has one character tell the story, first person narration is being used. It can be used in any genre of literature, but it is quite common in detective fiction, where a character is solving a mystery. We see the first person throughout one of the most famous detective stories: Sherlock Holmes. Other classic novels that have used first person are To Kill a Mockingbird, The Sun Also Rises, Catcher in the Rye, Adventures of Huckleberry Finn, and Lolita. It can also be found in today's popular writing, such as the The Hunger Games trilogy.

An author who used interior monologue as a form of first person is William Faulkner. Faulkner often revealed more about his characters by allowing them to share a stream of consciousness. We also see this in Margaret Atwood's novel, The Handmaid's Tale. We are able to learn more about the main speaker and some of her secrets when she starts to share.

A good example of dramatic monologue is Robert Browning's My Last Duchess. The speaker is talking to someone visiting him and through the conversation we learn that the speaker killed his last wife.

In William Faulkner's short story A Rose for Emily, we can find an example of plural first person. In the story, the speaker represents not just his point of view but the point of view of the entire town as Emily's secrets are unveiled.

An example of a peripheral narrator and its limitation can be found in F. Scott Fitzgerald's The Great Gatsby. The story is told from Nick Carraway's perspective, but he does not offer much to the plot line. We are limited in what we know about Gatsby and the other characters in the story. We also form our opinions of the upper-class society based on the details and the opinions that Nick shares.

Choose a work of fiction that uses first person narration. This can be one of the stories mentioned in the lesson, such as Catcher in the Rye or The Hunger Games, or a different story entirely providing it is narrated in first person. Choose one of the following prompts and write a scene of 500 words.

Choose a character whom you think might be unreliable who is not the main character—for example, although Holden is an unreliable narrator in Catcher in the Rye, you could not choose him. Consider what you think makes them unreliable: antagonists, for example, usually do not think they are evil and may believe they have to do what they are doing. Pick a scene and write their perspective.

When crafting your version of the scene, keep in mind:

Identifying the Narrator of a Text: Lesson for Kids

The Purpose of a Transitional Government

Identifying the Narrator of a Text: Lesson for Kids

The Purpose of a Transitional Government