I'm the mom of three boys. I give each of my sons an allowance, but my sons aren't free to spend the money as they wish. The allowance comes with conditions. I tell the boys what they can and cannot do with their funds. My system is a bit like the relationship between our federal government and state governments. Let's look at how.

The framers of the United States Constitution used federalism, which is a division of power between the federal government and the individual state governments. Each government entity was given responsibility for matters that are best addressed at that level of government. The responsibilities used to be very distinct, with most powers reserved to the states through the Tenth Amendment.

However, federalism has evolved over the course of American history. In the 1930s, the New Deal brought new federal legislation enacted in response to the Great Depression that implemented several programs and policies geared toward reviving the economy. This resulted in the federal government regulating areas it hadn't previously regulated. 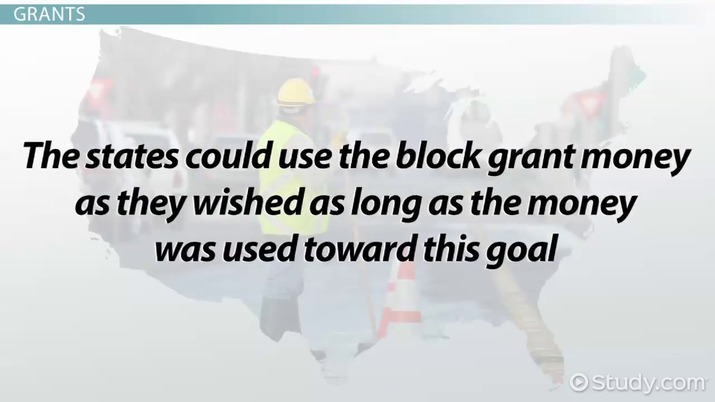 Coming up next: Sovereignty in the American Political System: Definition & History

The new programs and policies were based on fiscal federalism. Fiscal federalism means that federal funding is allocated to the states with specific conditions attached. Like me with my sons, the federal government controls the state governments through money.

Let's take a closer look at each of these.

We'll start with grants. Grants in aid refers to when the federal government gives money to the states for a particular purpose. There are two main types of grants in aid.

A categorical grant works differently than a block grant. A block grant is federal money given to a state for a broad purpose, with few restrictions on how the money can be used. States can decide where and how to use the money. The Welfare Reform legislation, enacted in 1996, uses block grants. Under the law, federal money was given to states. The states then developed and implemented their own plans to move people off welfare and into employment within a five-year period. The states could use the block grant money as they wished, as long as the money was used toward this goal. The states have broad discretion to implement the programs, since the federal government mostly only monitors the progress and outcomes of block grant projects.

These two types of grants can be differentiated from revenue sharing. Revenue sharing is when the federal government gives money to the states with no restrictions on how the money can be used. President Nixon initiated the use of revenue sharing programs in the 1970s, but by 1986 this practice was no longer in use.

The last fiscal federalism category is mandates. A mandate is a federal regulation that states must follow. Mandates can be funded, meaning the federal government gives money in exchange for compliance. States risk losing the funding if they don't follow the mandate. A condition of aid means that compliance with a particular mandate is a prerequisite for obtaining federal money for that issue.

For example, from 1974 through 1987, the federal government mandated a maximum speed limit of 55 miles per hour. Because this was a state matter, the states could choose whether or not to conform. However, states risked losing federal highway funding if they didn't comply. Many mandates, though, are unfunded. This means states must follow federal mandates even in areas where the states constitutionally make their own laws and don't receive federal money. States risk legal action if they don't comply.

Our environmental laws are unfunded mandates. These mandates set requirements for air and water pollution control, even though that issue is largely left to the states to regulate. Under the mandates, the states are still responsible for making their own laws, but those laws must adhere to federal rules. As a result, we don't have one state highly regulating pollution and another not regulating it at all.

Let's review. Federalism is a division of power between the federal government and the individual state governments. Federalism has evolved over time. The New Deal brought new federal legislation enacted in response to the Great Depression that implemented several programs and policies geared toward reviving the economy. These programs resulted in fiscal federalism, which means that federal funding is allocated to the states with specific conditions attached. This means the federal government is involved in matters that are reserved to the states. There are four categories of fiscal federalism:

Revenue sharing is when the federal government gives money to the states with no restrictions on how the money can be used. This practice is no longer used. Mandates are federal regulations that states must follow. If the mandate is funded, it might have a condition of aid. This means that compliance with a particular mandate is a prerequisite for obtaining federal money for that issue.

After reviewing this lesson, you'll have the ability to:

What are the Articles of Confederation? | Summary & Purpose