View bio
Capacitors are devices used to store electrical energy. Explore the parts and types of fixed and variable capacitors. Learn about capacitor anatomy and review capacitors in DC circuits, including series and parallel. Updated: 11/27/2021
Create an account

You probably use capacitors every day of your life. For example, if you typed on a keyboard to get to this lesson, guess what? You just used a capacitor. Want to know how it works? Let's see.

A capacitor is basically two conducting surfaces that are parallel to each other, either separated by air or another non-conducting material called a dielectric, and connected to a voltage source. Capacitance is the ability to store electric charge, and its unit is the farad (F). The use of a dielectric is to increase the capacitance of a capacitor.

The voltage source connected to the capacitor charges one plate with positive charge, and the other with negative charge. A capacitor is essentially what a battery is, but when the plates touch, the stored electrical energy is dissipated instantaneously, while a battery's energy is dissipated gradually. The change in the capacitance while pressing the key on the keyboard is translated by the computer into letters on the screen. 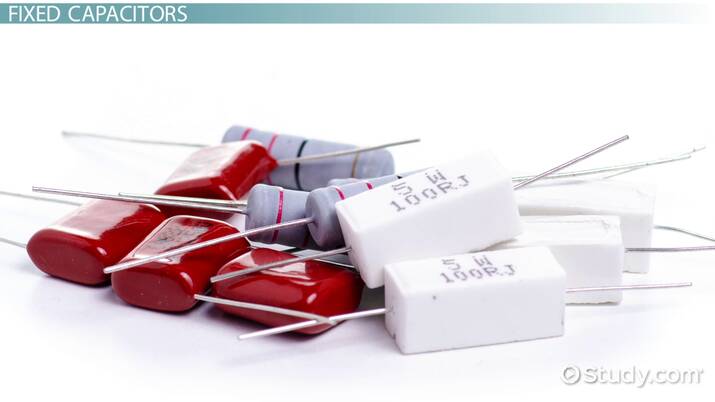 Paper capacitors have paper as their dielectric material. Paper, covered in wax, is alternately layered between aluminum sheets and rolled into a cylinder. Two wires are added, one to each end of the capacitor to connect to the voltage source. The advantages of paper capacitors is that they can be used in high voltage and high amperage applications.

Ceramic capacitors have a large charge to size ratio. A lot of charge in a small capacitor is advantageous where space is limited, and ceramic material is a good insulator.

Electrolytic capacitors are advantageous because of their large capacitance capability. Between their conducting sheets, they have aluminum oxide sheets acting as a dielectric and paper soaked with electrolytic fluid that acts as a conductor.

Variable capacitors are pretty much just as they're named. They're capacitors whose capacitance can change by physically or electronically moving the plates.

Tuning capacitors are commonly used in radios where you tune into a radio station. Originally, radios had a knob that could be turned changing the distance between the capacitor's plates.

Trimmer capacitors are used in the calibration of equipment after it has been manufactured. They are commonly located on printed circuit boards, and if there is any variation in their capacitance over time, they can be adjusted, but they are only designed to be able to handle a few adjustments. They commonly hold 100 volts, but some can go up to 300 volts.

Mechanical capacitors have a series of semi-circular plates inside of them attached to a knob. The advantage of this is that the capacitance can be changed quickly if needed, and since they're mechanical, they are reliable because they aren't overly complicated.

Electronic capacitors change their capacitance by changing the DC voltage applied to them, which is an advantage in certain applications such as multi-meters that measure voltage, amperage, and resistance. DC, in case you've forgotten, stands for ''direct current,'' which is the type of current provided by a battery.

As previously mentioned, capacitors store electrical energy. There are two types of basic DC circuits: series and parallel. Series circuits only have one direction for current to flow, and parallel circuits cause the current to go through multiple paths.

We can mathematically determine the equivalent capacitance for each circuit in this diagram appearing here.

Equivalent capacitance is the theoretical replacement of all of the capacitors in a circuit with one capacitor that is equivalent to what is actually there. The battery would not be able to tell the difference between the original circuit and the equivalent circuit. Let's look at each circuit type individually.

Appearing here is a series circuit:

To determine the equivalent capacitance we use the equation:

To determine the equivalent capacitance we use this next equation, which is simply:

In both equations, the three dots mean the equation can be expanded to include as many capacitors a circuit might have.

The types of fixed capacitors are:

The types of variable capacitors are:

Finally, we learned that to calculate the equivalent resistance for capacitors in series we use this equation:

And for capacitors in parallel we use this equation:

Now you should be fully equipped with the knowledge of the different types of capacitors, how they work, and how to calculate equivalent capacitance, which, remember, is the theoretical replacement of all of the capacitors in a circuit with one capacitor that is equivalent to what is actually there.

What type of circuit is shown? 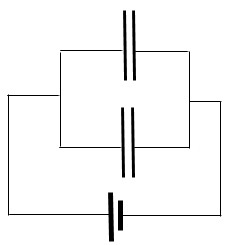 This activity will help you assess your knowledge of fixed and variable capacitors.

For this activity, print or copy this page on a blank piece of paper. Then, use the words presented in the word bank to complete each of the given sentences. Neatly write your answers on the appropriate blank space provided.

1. The ability to store electric charge which is measured in units of Farad is called __________.

2. An __________ uses aluminum oxide sheets acting as a dielectric and is deemed valuable for its large capacitance ability.

3. __________ are variable capacitors that are used in radios to listen or receive radio frequencies.

7. When there are multiple paths that current could go through, a DC circuit is considered to be __________.

8. __________ are advantageous in applications to multi-meters that measure voltage, amperage, and resistance, for they change their capacitance by changing the DC voltage, applied to them.

What Is Permittivity? - Definition & Examples

What is an Ammeter? - Definition & Function

What is a Voltmeter? - Definition & Uses

What is a Transistor? - Definition, Function & Uses