Fleance, the son of Banquo, is an ally to Macbeth who is presumed to be a survivor of this tragic tale. See the role of Fleance by analyzing his character and scenes in 'Macbeth.' Updated: 12/21/2021
Create an account

Even just one domino knocked over can set a whole plan to ruin. The single domino itself doesn't seem all that important until you witness the effects of it. minor characters in a play, such as Fleance in Shakespeare's Macbeth, can play such an important part.

When Macbeth and Banquo, Macbeth's ally and friend, first encounter the three witches, they tell Macbeth that he will one day be king. At the same time, they tell Banquo that his descendants will also be king one day. Because of this, Macbeth feels threatened by Banquo and decides to kill him and his son Fleance. However, Fleance escapes the murder. By the end of the play, we do not yet know where Fleance is, but many assume that he is in Scotland. 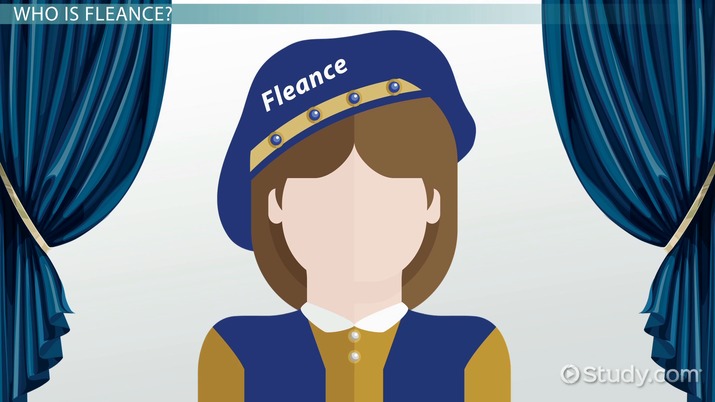 Fleance is first seen in Act II of the play. In his first scene, Banquo and Fleance arrive at Macbeth's castle late in the night. Banquo hands Fleance his sword before going to bed. By giving Fleance his sword, this signals to us that Fleance is serving as his father's squire, or young nobleman acting as an attendant.

Although we do not see Fleance again until his father is murdered, Macbeth does mention him to Banquo. Macbeth is planning the murders of Banquo and Fleance and asks his friend, 'Goes Fleance with you?' Macbeth wants to be sure that Fleance will be present when he sends his men to murder them.

After Fleance hides, we do not see him again in the play. Macbeth does express his disappointment that Fleance was not dead describing him as 'the worm that's fled.' Macbeth is relieved that he has killed Banquo but is worried that Fleance is still alive, knowing that the witches' prediction may still come true.

Finally, Fleance is mentioned once more in the play by Lennox. Following Banquo's murder, Lennox is relieved the Fleance was able to escape, saying 'For Fleance fled: men must not walk too late.' Lennox knows that Fleance would have been killed as well if he had stayed or was found.

After Macbeth receives the witches' prophecy that he would become king, he immediately begins to plot on how to take the throne and keep it. The promise given to Banquo that his descendants will also be king lingers over Macbeth. When he decides to kill Banquo and his family, he is trying to secure his reign.

Fleance's escape is significant because Macbeth knows that his kingdom will end. As long as Fleance is alive, the witches' prophecy that Banquo's line will rule can still come true, and Macbeth will never truly be free, always waiting to lose the throne. Because Macbeth believes in fate, he would recognize that it is Fleance's fate to become king.

Fleance's escape begins Macbeth's decline into paranoia. When Macbeth receives word that Fleance lives, he sees the ghost of Banquo at his dinner party. Following this, Macbeth becomes more violent and even tells Lady Macbeth that his killings have just begun. Knowing that Banquo's descendants could still be king is what drives Macbeth to murder and anger.

Fleance, a minor character in William Shakespeare's play Macbeth, is the son of Banquo. When the three witches give Macbeth their prediction that he will one day be king, they also tell Banquo that, although he will not be king, his descendants will be. Macbeth knows that as long as Fleance lives, he could never be secure in his kingdom.

We encounter Fleance very little in the play. In Act II, he arrives at Macbeth's castle with Banquo and serves as his father's squire (attendant). After that, Macbeth mentions him briefly to Banquo. We do not see him again until Act III when Banquo cries for Fleance to flee the three murderers. Lennox later expresses his relief that Fleance is alive and in hiding.

Fleance's survival is significant because it fulfills the witches' prophecy that Banquo's descendants will be king. Because Fleance is alive, Macbeth can never truly be content being king; he will just be waiting to lose the throne. This leads Macbeth to become paranoid and violent. Fleance's escape ultimately shows Macbeth that his fate is not to stay king.

Macduff in Macbeth: Character Traits & Analysis | Who is Macduff?