Explore the setting in ''Flowers for Algernon'' to recognize its importance. Review the character of Charlie Gordon, the period of time covered in the story, and the locations of New York and Chicago to understand more about this story's message. Updated: 12/28/2021
Create an account

Flowers for Algernon by Daniel Keyes is the story of a 32-year-old intellectually disabled man named Charlie Gordon, who undergoes a surgery to improve his intelligence. The story is told through a series of Charlie's first-person progress reports that indicate his improvement in grammar, spelling, and word choices. Despite his improved academic intelligence, Charlie suffers when his social development does not progress at the same rate. The setting plays an important role in this story as attitudes about disabilities and ethical medical practices have evolved since the 1960s when this novel was first published. 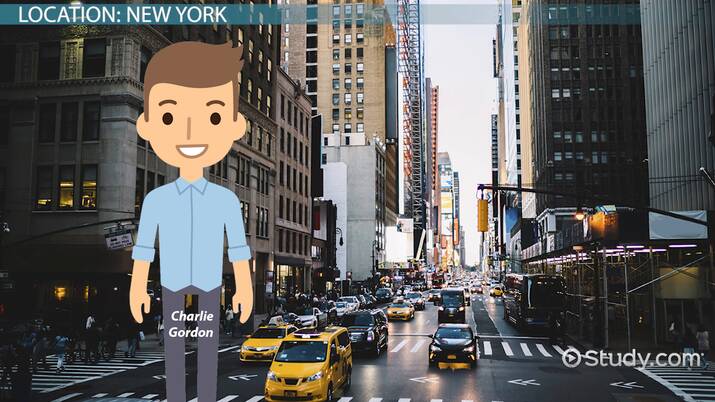 Coming up next: Flowers for Algernon: Summary & Themes

Charlie's first progress report is dated March 3 with the final entry on November 21st of the same year, an eight-month period of time. The lack of political correctness that existed in the 1960s resulted in Charlie's mother rejecting him, as she took his disability personally. By the end of the 1960s, laws were passed that required services for disabled students in public schools and began deinstitutionalizing differently abled citizens.

In the novel, Charlie describes what Mr. Donner, his boss and his uncle's best friend, told him about how Mr. Donner was able to hire Charlie as a janitor in the bakery to prevent him from being committed to the Warren Home: '… mother had you comited to the Warren home I got them to releese you on outside werk placmint.'

The relatively short time period in which Charlie receives treatment plays a part in Charlie's struggle to catch up socially to his sudden surge in intellect following his surgery. Charlie discusses his confusion with Dr. Strauss, his neurologist and psychiatrist: 'Dr Strauss feels that emotionally I'm still in that adolescent state where being close to a woman, or thinking of sex, sets off anxiety, panic, even hallucinations.'

Originally, Charlie lives with his family in Brooklyn, NY. Charlie's mother and sister stay in Brooklyn, but his father, Matt, leaves his mother and opens a barbershop on Long Island. The Beekman Center for Retarded Adults, where Charlie learns to read, and Charlie's apartment are in Manhattan. The city is important because it provides opportunities for Charlie that would not be available in the suburbs or rural areas. For example, Charlie does not need to drive a car, as there are plenty of other transportation options available, such as taking a bus, subway, or taxi and walking. Charlie also has easy access to hospitals, housing, restaurants, and schools. As Charlie's intelligence grows, he realizes the opportunity that exists in the city: 'Incredible that I've lived and worked all my life just a few stops away on the subway and been to Times Square only once - with Alice.'

How does Charlie's trip to Chicago help him see things from a new perspective? Well, in June, Charlie attends the International Psychological Convention in Chicago with Professor Nemur, the scientist in charge of experimenting on Charlie. While surrounded by scientists at the convention, Charlie realizes that his intelligence has surpassed the levels of those around him. Now that he's no longer able to view the professors studying him as superiors, he begins to resent being treated as a sideshow act.

Once it occurs to Charlie how little Nemur and Strauss know in comparison to him, he's frightened. 'I don't know why I resented it so intensely to have them think of me as something newly minted in their private treasury, but it was - I am certain - echoes of that idea that had been sounding in the chambers of my mind from the time we had arrived in Chicago.'

Let's review. In the novel Flowers for Algernon by Daniel Keyes, Charlie Gordon is an intellectually disabled man living in New York City during the 1960s, a time when discrimination and fear towards people with disabilities resulted in ill-treatment. In the novel, Mr. Donner hires Charlie as a janitor in his bakery. While taking classes at the Beekman Center for Retarded Adults, Charlie is put in contact with Dr. Strauss and Professor Nemur, who perform an experimental surgery to make Charlie more intelligent. Charlie's intelligence rapidly increases then declines because he's unable to keep up emotionally and socially. When Charlie attends a science convention in Chicago, he realizes how irresponsible it was for them to perform the experiment on him.

To Kill a Mockingbird by Harper Lee | Themes & Symbols