Ana has a PhD in Biology. She has taught college classes at leading U.S. universities, also works as a Biology tutor. She has published several scientific journals.

What Is the Forebrain?

Have you ever heard the term 'reptilian brain' used to describe the human brain? This refers to the primal part of our brain that we actually share structurally with a reptile's brain. Reptiles are, evolutionarily speaking, one of the oldest living organisms; therefore, our 'reptilian brain' is the developmentally oldest portion of the brain, while the forebrain is the most recent. Let's explore this massively advanced, yet evolutionarily young, portion of our supercomputer human brain.

The term forebrain means 'last brain,' or the most recently developed portion of our brain. It controls everything from voluntary movement and the integration of sensory information to all our higher abstract thought, logic, speech, and emotions. Basically, the development of the forebrain is why we humans are so intellectually advanced. Let's look at the structures of the forebrain that enable our cognitive abilities. 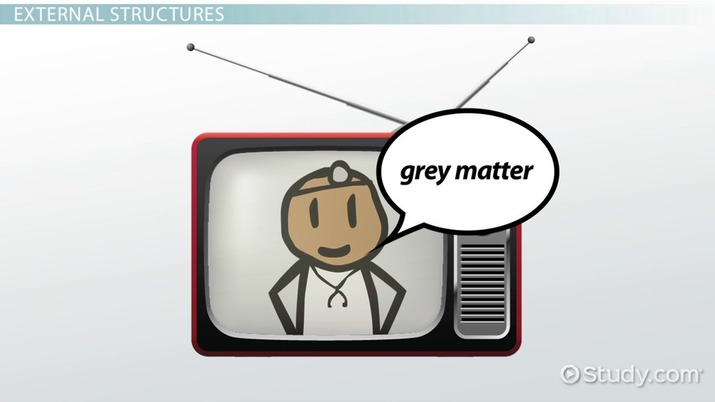 Coming up next: The Vestibular System: Definition, Anatomy & Function

The most obvious structure of the forebrain is the cerebrum, which is divided into a left and right hemisphere by a deep groove called the longitudinal fissure. The right hemisphere is our artistic and creative side, while the left hemisphere is our logical, recollecting side for facts and figures. Generally speaking, the cerebrum is the tissue that most people think of as 'brain tissue' as it is the largest portion of our brain. Let's take a moment to explore the superficial structures of the cerebrum before jumping into the deep structures.

Have you ever watched a TV show where the doctors spoke about the 'gray matter' and 'white matter' of the brain? Well, both of these tissue types are part of the cerebrum; gray matter is cortex tissue (outer tissue), while white matter is deep tissue (inner tissue) below gray matter. White matter is composed of neurons encased in a fatty white sheath called myelin. This insulates the neurons, aiding in rapid transit of neural signals. gray matter is unmyelinated (without myelin) and so appears gray.

The cerebrum is said to look something like a walnut and has some very unique external features other than its two hemispheres. The cerebrum has many little folds of tissues called gyres. The gyres have depressions between them called sulci (plural for sulcus). These folds and depressions increase cortical surface area. More cortical tissue equals more neurons to transmit thought, emotion, and muscle control signals. Did you know that if you were to smooth out all of the gray matter of your brain, it would be anywhere from 233 to 465 square inches or one to two full-sized sheets of newspaper?

The cerebrum is divided into four main lobes:

Let's explore where each of these are as well as what they do.

The thalami (plural of thalamus) are two egg-shaped structures that sit deep in the cerebrum. It is an important structure as the main relay station between the sensory impulses that come from the environment and go to your brain. You can think of the thalamus like the UPS man who ensures that 'packages,' in this case sensory impulses such as touch, pain, or equilibrium, are received at the correct 'address' in your brain. Without the thalamus sorting our neural signals, the world might become a really confusing place. For instance, receiving sensations regarding pain in our hand in the area of our brain meant for interpreting sight would be quite the mix-up.

The hypothalamus is so named as it is 'hypo' (below) the thalamus. It's a cone-shaped structure that unites your autonomic nervous system with your endocrine system. The endocrine system of your body is responsible for hormone secretion into your blood stream. Its endocrine role is due to the pituitary gland, which is connected to the cerebrum via the tip of the hypothalamic cone. Therefore, it relays information to and from the cerebrum and the hormone secreting pituitary gland. As such, the hypothalamus controls responses such as thirst, hunger, fatigue, sleep patterns, and body temperature.

The limbic system is a collection of interior structures of the cerebrum, which orchestrate everything from behavioral responses to long-term memory and olfaction (sense of smell). These might seem like a random collection of actions to be located together, but think about how integral your sense of smell is to your long-term memory. Do you have any scents that remind you of a particular moment?

Due to our limbic system, as well as the close positioning of the centers for memory and scent within our brain, our sense of smell frequently serves as a key that unlocks memories from our past. Scents aid in our cognitive processes when in a situation where we encountered a smell previously; remembering that moment helps us predict what to expect in the upcoming moments and prepares us to react.

The forebrain is the largest region as well as the most evolutionarily recent portion of our brain. It is composed of our cerebrum, which is divided into two hemispheres by the longitudinal fissure.

The cerebrum is also divided into four lobes:

The cerebrum looks like a walnut, with many gyres and sulci. The outer cerebral cortex area is composed of unmyelinated neurons, making the tissue appear gray. The underlying myelinated tissue appears white.

These key structures of the forebrain play a role in sending information and controlling behaviors and functions.

Forebrain - the most recently developed portion of our brain; source of intellectual advantage in humans

Cerebrum - the most obvious structure of the forebrain; divided into a left and right hemisphere by the longitudinal fissure

gray matter - also known as cortex tissue; the outer tissue of the cerebrum

Gyres - little folds of tissues in the cerebrum

Thalami - two egg-shaped structures that sit deep in the cerebrum

Endocrine system - the system responsible for hormone secretion into the bloodstream

This lesson on the forebrain might successfully prepare you to reach these goals:

The most external part of the forebrain, the cortex, is divided into four main lobes. In order to understand the brain a little bit better you should know that each one of these lobes in the forebrain is associated with different functions. Review what are the main functions of each lobe and answer the following questions:

The forebrain is also made up of several internal structures. Each of these parts has very specific roles as well. Try to determine what would happen if any of these areas were compromised by some kind of brain injury.

Tympanic Membrane Overview & Function | What is the Eardrum?

Pscyhotherapy Types & Approaches | What is Psychotherapy?