Copyright
Lesson Transcript
Instructor: Lucy Barnhouse
Foreshadowing references future events by drawing meaning from repeated hints. See how different events are foreshadowed in 'Flowers for Algernon' leading up to his operation, following his recovery, and through both achievement and decline. Updated: 12/28/2021
Create an account

Flowers for Algernon, Daniel Keyes' 1966 novel, is about the possibilities and limitations of scientific progress. The narrator, Charlie Gordon, is a mentally impaired man who becomes the subject of an experiment. Foreshadowing (a literary device that previews a future event) hints at the possibility that all may not go well with the experiment. This feeling becomes more intense throughout the novel. 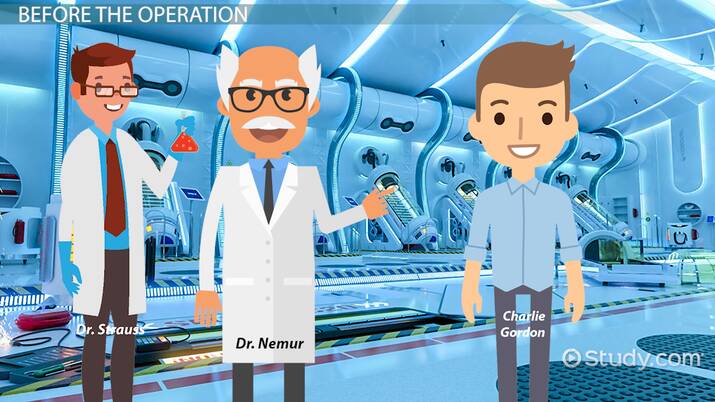 Coming up next: Flowers for Algernon Conflict

At the opening of the novel, Charlie's narration is naive and literal-minded. Told by his teacher about the existence of a project that might 'make him smart,' he eagerly goes to a lab for intelligence testing. In Progress Report 2, Charlie describes one of the tests he undergoes there as a 'raw shok test.' Readers know that this is a Rorschach test; the difference between Charlie's and the audience's understanding results in dramatic irony, another literary device whereby the audience, not the character, fully understands the situation.

Charlie's poor performance on the intelligence tests leaves the supervising scientists, Dr. Strauss and Dr. Nemur, with a difference in opinion. In Progress Report 5, Charlie's description of their conversation enables us to understand the different approaches of Dr. Strauss and Dr. Nemur, and maybe even their differences in character. Dr. Nemur is more clearly empathetic and concerned about Charlie's well-being. However, Strauss eventually convinces Nemur that Charlie's extreme stupidity, combined with his unusually good nature and motivation, makes him an ideal subject for the experiment.

Charlie later records the outcome of the scientists' discussion: Nemur finally agrees that they can use Charlie as a subject, as long as they make him understand that a lot of things can go wrong with the experiment. 'When he said that,' records Charlie, 'I got so happy and exited I jumpd up and shaked his hand for being so good to me. I think he got skared when I did that.' This poignant moment allows readers to sympathize with both Charlie and the kindly Nemur.

In the hospital, Charlie is first examined by a nurse named Hilda. She is friendly, garrulous, and pious. Referencing the biblical story of the Tree of Knowledge, she expresses uneasiness at the use of Charlie's operation to change nature. Rather sinisterly, she is replaced the day after their conversation. After returning to his job at the bakery, Charlie is delighted to be among his 'friends' again. In another instance of foreshadowing, he observes that the young, newly hired errand boy, Ernie, 'is very smart but the other pepul in the bakery dont like him so much.'

As Charlie's intelligence grows, he begins to interact with his teacher, Miss Kinnian, as a friend. First, they read Robinson Crusoe together, a story about a man desperately applying his intelligence to overcome isolation. Then they go to see a movie together, which Charlie analyzes disapprovingly. Charlie has made himself his own absolute standard, a sharp contrast with Robinson Crusoe's learned humility. Miss Kinnian is a bit worried about the possible consequences of Charlie's accelerated development. She tells Charlie: 'You'll see how all the different worlds of learning are related. You'll keep going up and up, and see more and more. And each step will reveal worlds you never even knew existed…. I just hope to God...that you don't get hurt.'

Ironically, Charlie's innovations - and interference - at the bakery make him unpopular. After Charlie's fired, he's devastated by this consequence of an operation he hoped would bring him more friends. 'Now, I'm more alone than ever before. I wonder what would happen if they put Algernon back in the big cage with some of the other mice. Would they turn against him?' The comparison between Charlie and the lab mouse - a captive, condemned to ceaselessly repeat exercises - is an ominous one. As Charlie fails to observe, he is less compassionate and less kind than he was before the operation.

Following Charlie's experiment, he not only makes rapid intellectual progress, but also uncovers painful childhood memories. While en route to a prestigious scientific conference, he recalls an experience with a quack doctor. In response to Charlie's pathetic question as to whether or not he would become a 'jean-ass' (genius), the doctor's revealing reply was: 'Only nasty little donkeys become jean-asses. You'll stay just the way you are-a nice kid.' Charlie defies the prediction. He becomes prodigiously intelligent, but also intolerant of the professors, and indeed of weakness in anyone.

Only gradually does Charlie perceive his own fallibility. After the conference, he writes: 'A short while ago I foolishly thought I could learn everything--all the knowledge in the world. Now I hope only to be able to know of its existence, and to understand one grain of it. Is there time?' Charlie flees the professors and goes on the run with Algernon. He strongly identifies with the mouse and begins to think of his former self as a menacing alter ego. 'The operation had covered him over with a veneer of education and culture, but emotionally he was there - watching and waiting. What was he waiting for?'

In the last chapters of the book, Algernon's decline foreshadows Charlie's decline. First, Algernon bites Charlie's girlfriend Fay. Charlie himself is alarmed by this, but he seems to record Algernon's changed behavior without recognizing its implications: 'Instead of the careful, determined movements down the maze corridors, his actions are rushed and out of control.... There is a strange sense of urgency in his behavior.' As Charlie's intelligence declines, he loses the ability to read Milton's Paradise Lost, recalling kind Hilda's earlier forebodings. Readers see that Charlie's own deterioration is inevitable, even as he resists acknowledging it.

Let's review. Flowers for Algernon, Daniel Keyes' 1966 novel, is about the possibilities and limitations of scientific progress. The narrator, Charlie Gordon, is a mentally impaired man who becomes the subject of an experiment. In the novel, foreshadowing (a literary device that previews a future event) is used in multiple ways, such as through allusions to the Bible, Charlie's misuse of language, and Algernon's development. The difference between Charlie's understanding and the audience's understanding results in dramatic irony, another literary device whereby the audience, not the character, fully understands the situation. Charlie's changing attitude toward Algernon and the mouse's later decline chart Charlie's 'progress' more clearly than his own narration.

Important Quotes from Flowers for Algernon

Irony in The Ransom of Red Chief

Buck in The Call of the Wild | Buck the Dog Character, Summary & Analysis

Metaphors in The Outsiders

Figurative Language in The Tell-Tale Heart