Copyright
Lesson Transcript
Instructor: Sarah Bostock
Shakespeare uses foreshadowing in Macbeth to create suspense throughout the play. Learn about the foreshadowing Shakespeare used, from the prophecies of the witches and Hecate and the apparitions prophecy to the Death of King Duncan and the fatal results of Macbeth's delayed understanding. Updated: 12/21/2021
Create an account

When you read a book or watch a movie, do you like getting hints about what is to come? If so, you enjoy a literary technique known as foreshadowing. William Shakespeare's use of foreshadowing in Macbeth is what makes the play so suspenseful for his audience to watch. 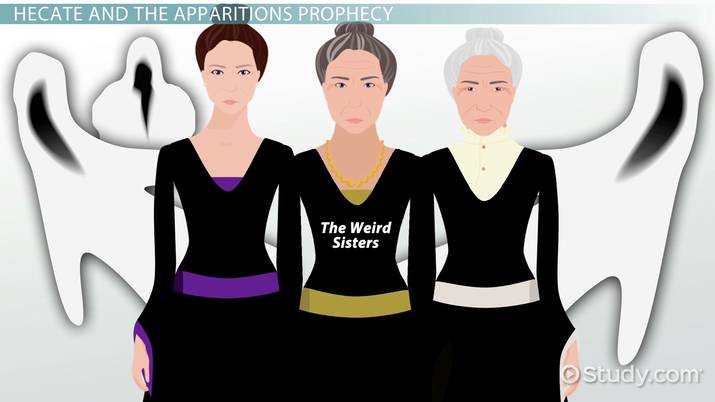 Coming up next: Alliteration in Macbeth

The Witches and Their Prophecies

William Shakespeare included supernatural elements in many of his tragedies, but Macbeth stands out among the others for its dark tone. In the very first scene of Act I, Shakespeare introduces his audience to the Weird Sisters. The Weird Sisters are three witches who tell prophecies, or make predictions about things to come. They inform the audience from the very beginning that, 'Fair is foul, and foul is fair,' meaning that appearances aren't always what they seem.

In Act 1, Scene 3, the witches tell Macbeth that he will be made Thane of Cawdor and then King of Scotland. Shakespeare uses this scene to tell the audience and Macbeth of things to come, but he also uses it as motivation for his character Macbeth. After hearing the predictions, Macbeth and later his wife, grow very ambitious to rise to power and kill King Duncan.

Hecate and the Apparitions Prophecy

In Act 3, Scene 5, the Weird Sisters are scolded by Hecate, the goddess of witchcraft for making prophecies without her permission. Hecate tells the witches and the audience, 'This night I'll spend/Unto a dismal and a fatal end.' Hecate's words reveal that she will change the course of future events with her magic. She also instructs the witches to meet her the next morning.

In Act 4, Scene 1, the witches meet with Macbeth once again, and they chant Shakespeare's well-known line, 'Double, double toil and trouble/Fire burn, and cauldron bubble.' Here the witches conjure up three apparitions or ghosts that give messages to Macbeth. The first apparition tells Macbeth to beware of Macduff. The second apparition tells Macbeth that no one who was born from a woman can cause him harm. Finally, the last apparition informs Macbeth that he won't be destroyed until, 'Great Birnam Wood to high Dunsinane Hill/Shall come against him.' Obviously, these things don't seem possible, so Macbeth feels invincible. The witches' final predictions of this scene do come true at the end of the play.

Death of Duncan, King of Scotland

In Act 2, Scene 1, Macbeth kills Duncan, the King of Scotland. In the following scene, Macbeth tells his wife that he heard a voice that said, 'Sleep no more!' Macbeth realizes that he is no longer innocent and states that 'Macbeth shall sleep no more!' This foreshadows both Macbeth's insomnia and his wife's eventual slip into insanity. Later, Lady Macbeth sleepwalks through the castle repeating the infamous phrase, 'Out, damned spot! Out, I say!'

In Act 2, Scene 3, Lennox tells Macbeth, 'The night has been unruly.' Lennox describes 'Lamentings heard i' th' air, strange screams of death,/And prophesying with accents terrible/Of dire combustion and confused events...' At this point, the audience and Macbeth know that Duncan is dead, but Lennox does not. The night he describes foreshadowed Duncan's death.

In Act 2, Scene 4, the characters of Ross and an old man discuss how Duncan's horses acted out in a very unnatural manner. The horses 'turned wild in nature' and ate each other the night of Duncan's murder. Shakespeare uses most of Act 2, Scene 4, to describe a world that has been turned upside down because of Macbeth's murder of Duncan.

In Act 5, Scene 4, Macduff and Malcom (Duncan's son) lead an army of soldiers through Birnam Wood. The soldiers all hold branches in front of them to disguise their numbers. This creates the illusion that Birnam Wood is physically moving toward Macbeth's castle on Dunsinane Hill. Macbeth begins to understand that the witches' impossible prophecy is growing true.

Once Macduff, Malcom, and the soldiers reach Dunsinane Hill, the audience and Macbeth find out that Macduff wasn't born from a woman. He was delivered by Cesarean section, which means he was surgically removed or cut from the womb. It is at this point in the play that Macbeth realizes that the Weird Sisters were predicting his fall and not his glory. He refuses to surrender and is killed by Macduff.

William Shakespeare's Macbeth, one of his darkest tragedies, is full of many supernatural elements. The Weird Sisters and their prophecies greatly influence Macbeth's ambitious nature. Shakespeare repeatedly uses the element of foreshadowing to hint very plainly of things to come. Once Macbeth uses the prophecies as a motive to kill the rightful King Duncan, all of nature seems to turn upside down. In order to right the wrongs of Macbeth, the goddess of witchcraft, Hecate, has the Weird Sisters show Macbeth seemingly impossible predictions of things to come. They do this by conjuring up three apparitions who make Macbeth feel very much invincible. This false sense of security and his own ambition lead to his eventual destruction at the end of the play.

The 3 Apparitions in Macbeth