Danielle works in digital marketing and advertising. She holds a bachelor's degree in English and an MBA.

Formal equality suggests that all people should experience equal treatment, while substantive equality identifies individuality with a goal toward embracing uniqueness. Explore the differences between formal and substantive equality to understand how these approaches apply to the workplace. Updated: 01/24/2022
Create an account

Have you ever felt less than or marginalized in at least one aspect of your life? Whether it was a minor or major incident, every person has experienced some form of inequality or at least an instance of unfairness. It goes without saying that this doesn't feel great for anyone. This is why, in the workplace, professionals deserve equality on all fronts. There are two types of equality to consider: 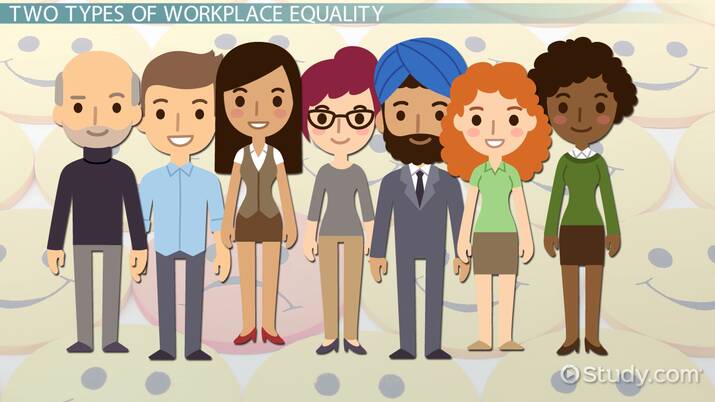 Coming up next: Barriers for Women in the Workplace

At work, formal equality appears as a written set of rules that dictates the equal treatment of all people within an organization. One example happens when positions open to all (qualified) candidates available for hire. This means any person with a fair application has a chance of getting the job.

Formal equality operates on the idea that all people should be treated as the same, yet innate human behavior is flawed. All people operate with some baseline perspective about race, privilege, or age. It does not consider workplace privilege, which occurs when one person has advantages or realizes benefits over another, even unintentionally.

Even though formal equality and written rules are built with positive intentions, their applications to unequal groups have unequal results. Formal equality does not consider majority and minority groups, which means majority groups are often unfairly favored. The majority group is a group in a demographic with the most members in it. For example, it may seem like a fair rule to require all people on your team to wear their hair short and cut to the chin, but this does not account for employees with religious differences.

An advantage of formal equality is that it produces a written set of principles and rules that are followed for all business decisions. When applied universally and without prejudice, a blanket set of rules does not favor any party. The disadvantages of formal equality include:

In a classic example of formal versus substantive equality, let's discuss hiring practices. A formal rule might state that no preference is given to any person based on certain traits. Without any intervention, a hiring manager may receive more qualified applicants from the majority group simply because of a lifetime of opportunity.

Let's take a couple of moments to review what we've learned. There is no one-size-fits-all solution to equality, especially in the workplace. There are two types that are commonly encountered. They are formal and substantive equality. Formal equality is a belief that, for fairness, a person must be consistent or equal in treatment at all times. This form does not consider workplace privilege, which occurs when one person has advantages or realizes benefits over another, even unintentionally. Even though formal equality and written rules are built with positive intentions, the application of rules to unequal groups have unequal results. Formal equality does not consider majority and minority groups. The majority group is a group in a demographic with the most members in it. Substantive equality goes beyond the basics of recognizing the equality of all and identifying differences among groups of people with the long-term goal of greater understanding. Both forms have their own advantages and disadvantages, which is why it's best for an organization or office to strive to find a healthy balance between the two schools of thought without strictly adhering to one over the other.

How Physiology of the Brain Affects Emotional Intelligence

Applying Leadership Skills in the Workplace

Communications 120: Presentation Skills in the Workplace