View bio
Learn about the different forms of energy, the ability to do work. Compare kinetic and potential energy to understand how energy functions. Finally, explore other types of energy people use, such as electrical, sound, and thermal energy. Updated: 12/27/2021
Create an account

Get up! Yes, you. Get up. Now do ten jumping jacks. Take a break. Tired yet? Now run in place for 20 seconds. Take another break. When you do this, you're changing forms of energy. In science, energy is the ability to do work, and work is the transfer of energy from one place or object to another. Now, let's use some energy to learn about some of the different forms of energy! 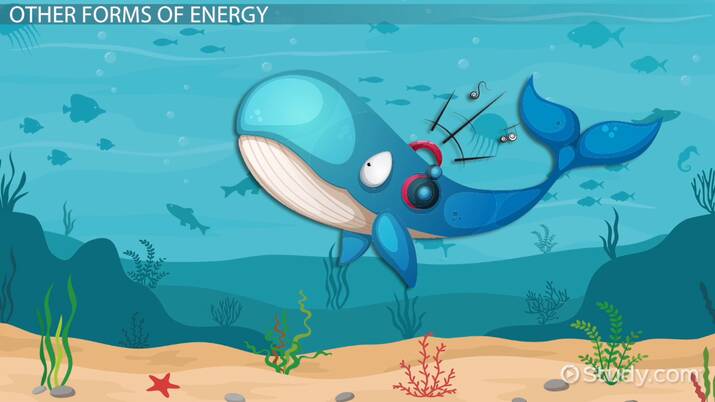 Try it now
Back
Coming up next: What is Energy? - Lesson for Kids

Kinetic energy is the energy of motion. This form of energy happens when you are playing a game, riding your bike, or even doing your homework. Whenever you are moving, you are using kinetic energy.

Other Forms of Energy

Let's take a closer look at some other forms of energy:

Light energy is the only form of energy that we can actually see - with the other forms of energy, we only see the results. Light is a type of electromagnetic radiation energy that travels as a wave. The sun provides natural light energy, which can give us a tan! Plants use the sun's light energy and convert it into food. Light is always moving; therefore, it cannot be stored and will only ever be in the form of kinetic energy.

Electrical energy is a form of energy that is created as electrons move from one atom to another. We use wires to create electrical circuits, which are pathways formed in a loop, that the electrons can move through. Electricity happens when electrons, with their charges, move around the circuit. It's through this electric current that we have the electricity in our houses that powers our televisions and computers.

Sound energy is a form of energy created when objects vibrate. This vibration causes sound waves, and these waves must travel through an object, such as air or water, in order to for the sound to be heard. When the vibrations are moving quickly, the sound waves will be shorter, and this will create a high note. Slower vibrations cause longer sound waves and create lower notes. In space, there are no objects for sound to travel through, so there is no sound!

Thermal energy can also be called heat energy. Heat energy happens when molecules are moving at a high speed through an object. The faster these molecules move, the hotter an object can get. Because movement of molecules is the key to thermal energy, this is a form of kinetic energy.

There are some types of energy that are available naturally from the environment - solar and wind energy are two examples. We can capture the light energy from the sun and convert it into electricity that we can use. Wind, which is moving air, and therefore a form of kinetic energy, can be captured through the use of windmills and turned into electrical energy, which can power generators that will provide electricity for our use.

Alright, let's review what we've learned. Energy, which is the ability to do work, comes in many different forms. When objects are at rest, they have potential energy, while objects in motion have kinetic energy. Other forms of energy such as light, electrical, and thermal energy are ones that we see and use every day and that we probably don't even think about until the power goes out - then we really understand the importance of energy!

There are also renewable sources of energy, like solar and wind energy. In the end, energy is what runs society, and we're always looking for newer, better ways to capture and make use of it.

This activity will help you assess your knowledge of the different forms of energy.

Determine whether the following statements are True or False. To do this, print or copy this page on a blank paper and underline or circle the answer.

True | False 1. Thermal energy is derived from sunlight with the use of a solar panel.

True | False 2. The kinetic energy of an object is the energy that it possesses due to its motion.

True | False 4. Plants use the energy from the Sun to perform photosynthesis.

True | False 6. The energy that comes from the temperature of the heated substance is called thermal energy.

True | False 7. Electrical energy is a form of energy resulting from the flow of protons.

True | False 8. Windmills harness the power of the wind to produce renewable energy.

True | False 9. An electrical circuit is a path in which electrons flow.

True | False 10. Kinetic energy is a form of thermal energy.

Try it now
Back
Create an account
Forms of Energy: Lesson for Kids
Start today. Try it now
Physics for Kids

The Function of the Circulatory System Lesson for Kids

Tales of a Fourth Grade Nothing Study Guide

Are You There God? It's Me, Margaret Study Guide