Derrick has taught biology and chemistry at both the high school and college level. He has a master's degree in science education.

Fossils are critical tools in science because they give us clues to the types of plants and animals that lived on Earth in the past. In this lesson, you will learn about the types of fossils and how they were formed.
Create an account

Fossils are essentially clues that have been left behind by various forms of living things. They are instrumental tools for understanding the diverse groups of organisms that have inhabited our planet at one time or another. A fossil is any preserved evidence of an organism. Plants, animals and even bacteria can form fossils in some form.

Although there is a rich diversity of fossils, and more are being discovered every day, the fossil history is like a book that is missing many pages. It is estimated that approximately 99% of species that ever existed have become extinct. Only a small percentage of those organisms have been preserved as fossils or discovered. 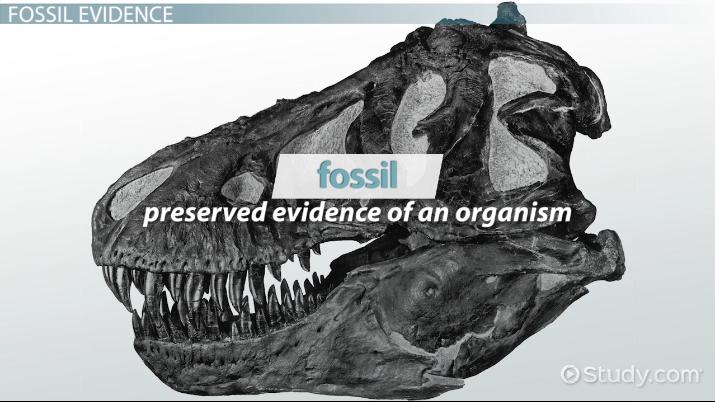 Why are there so few fossils relative to the number of species that have existed? It is most likely because organisms decompose before they have a chance to become fossilized. Only those organisms that are quickly buried in sediment after their death become preserved.

A trace fossil is any indirect evidence left by an organisms. Examples of trace fossils include footprints, burrows and fossilized feces that have been left behind by organisms. They simply leave material evidence that the organisms existed rather than evidence of the actual structure of the organism.

Molds and casts are also important fossil evidence. Molds are impressions of entire organisms that have been left behind. Casts are molds that have been filled with sediment over time.

Replacement fossils are fossils where the original material of an organisms is replaced with mineral crystals that can leave detailed replicas of hard or soft parts. These types of fossils can appear amazingly realistic and give scientists a better visual image of the organism.

Petrified fossils are formed when empty pore spaces of the organism are filled in with minerals that crystallize. A classic example of this is petrified wood.

Amber fossils were made known to the popular imagination by movies depicting dinosaurs. They are composed of organisms that have been preserved in tree sap that hardened over time into amber.

Original material fossils are fossils of organisms that have been preserved as a result of mummification or freezing. Recent headlines have been about entire animals, such as woolly mammoths, that have been found frozen in arctic ice. This leaves the entire organism preserved to be studied.

Where Does Rapunzel Live in the Original Story? | The Real Story & Setting of Rapunzel

How to Write a Written Report of a Scientific Investigation