Found Instruments are objects that make music despite being created for something else, and Prepared Instruments are those designed for musical purposes. See the use of each type of instrument in modern music. Updated: 10/15/2021
Create an account

Bwahahaha! The maniacal laughter rolls from the tower, mixing with crack of lightning and howl of wolves. There, a madman appears in the window and screams to the heavens, 'It plaaaaaays!' Wait, it plays? Not it lives? What kind of experiments are they doing up there? Well, actually, they're experimenting with music.

Since the mid-20th century, the genre of experimental music has been growing in popularity. It's characterized by a lack of predictability and reliance on unexpected or untraditional techniques. This can lead to some pretty crazy experiments when it comes to instruments. Not re-animating a dead corpse crazy, but still, it's the work of mad geniuses. 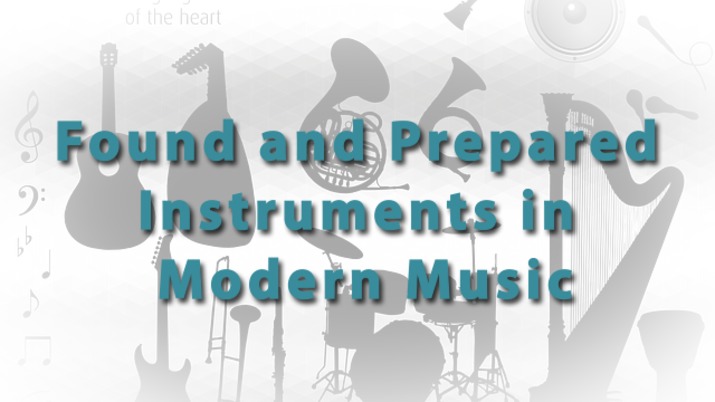 Coming up next: Modern Experimental Music: Glass, Cage & Use of Silence

Throughout the 20th century, musicians experimented with new instruments and tried to find ways to make their old instruments sound new. The experimental musicians said 'why use instruments at all?' A found instrument is an object that is used to create music that is not made for that purpose. Take this for example. This is a bicycle bell. I ring it to signal that my bike…actually I don't really know what it signals, but it's for a bicycle. Now, if we take that and suddenly put it into the percussion section of an orchestra--voila! Found instrument. Does the bell work as part of this ensemble? You bet--it adds a unique sound that traditional instruments may not produce. That's the goal of using found instruments--to explore a wider range of sound possibilities by incorporating objects not traditionally used in a musical setting.

So, what other sorts of found instruments have we seen since the mid-20th century? Baseball bats beating against trash cans to create a percussion effect. Sounds like a home run. Using pots and pans instead of drums, pulling that off takes some real skillet. Breaking glass in a specific rhythm. What a shattering effect that has. Found objects challenge the traditional assumptions about music but ironically are probably as old as music itself. Most researchers agree that the first instruments ever created were found objects, from shells to rocks, that early humans learned to appreciate for their acoustic qualities.

Experimental musicians also challenge the sound possibilities of music by altering existing instruments. An instrument that has been altered to change its sound is called a prepared instrument. That's a very basic and broad definition, and this concept has a wide range of applications. Some experimental musicians crack their cymbals to change the way they reverberate. Others incorporate found objects into an existing instrument, like using a sock as the mute for a trumpet to create a unique muffled sound. Those with technical know-how may also incorporate electronics into traditionally non-electronic instruments to try and alter the sound that way.

For the wide range of possibilities here, there are two types of prepared instruments that have become somewhat accepted. The first is the prepared piano, a piano with objects placed between the strings to alter the sounds. When the pianist presses a key on the piano, these alterations will change the how the string vibrates, and thus change the sound. And the result, well just listen.

This is Sonata II by John Cage, one of the founders of modern experimental music.

The other common form of prepared instrument is the prepared guitar. Just like the piano, it has objects placed under, over, or between strings and frets to change the sound. Those two instruments are pretty well accepted amongst experimental musicians, but really there's no limit to what's possible. Overall, many prepared instruments are an assemblage of found parts and existing instruments, so they're basically the Frankenstein of instruments. The Frankinstrument. Fine, go ahead and say it.

It's not science fiction. It's not a scary story. It's just experimental music, a modern musical genre characterized by a lack of predictability and reliance on unexpected or untraditional techniques. One of the common ways that experimental musicians create their unique and unpredictable sounds is through unique and unpredictable instruments. found instruments are objects used to create music that are not made for that purpose' Examples could include breaking glass, banging on pots and pans, or ringing bicycle bells. Other experimental musicians rely on prepared instruments, instruments that have been altered to change the sound. The most common two forms of these are the prepared piano and prepared guitar both of which involve placing objects around the strings to change how they vibrate and produce sound. It may sounds like a monster flick to some, but it's no urban legend. It's just experimental music.

Chordophone Instruments & Examples | What is Chordophone?

What Is a Phrase in Music? | Antecedent & Consequent in Music

Tone Color Definition & Examples | What is Tone Color in Music?

How Does Sound Travel? - Lesson for Kids

What is Music? | Characteristics of Music & How Music is Made

What is Physical Education? - Definition & Overview