Amber has taught Art History, Humanities, and Art Appreciation, and has a master's degree in Book Arts and Printmaking.

Francisco de Goya was a Spanish Romantic painter in the late 17th and early 18th centuries known for his works depicting the nobility and royalty as well as political and social turmoil. Explore a biography of Goya and how his life experiences influenced his art, and discover an overview his most famous works. Updated: 10/22/2021
Create an account

Walking the line of working for the government and commenting on its corruption is something few people are able to do. Francisco de Goya was one of the rare individuals to achieve this, working as a court painter while also creating emotional works of social and political protest. In this lesson, you'll learn about this Romantic painter's influences and how these works tied into his experiences. 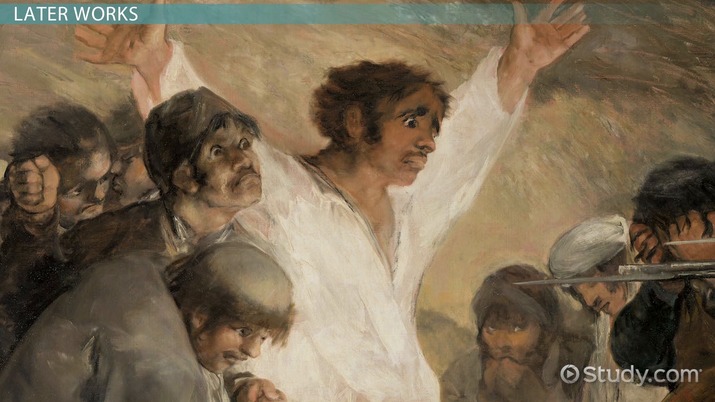 Francisco de Goya was born in 1746 in Fuendetodos, Spain. He moved with his family to Saragossa, and when he was 14, he began to train as an artist under the religious painter, José Luzán. With Luzán, he copied stamps and other works, but he soon grew tired of the work and searched for other instruction.

At 18 years old, Francisco moved to Madrid and began more formal training, but found very little success there, which led him to a decision to move to Rome in 1771. Here, he found the success he was looking for and returned to Spain with new confidence, continuing his studies under Francisco Bayeu y Subías, a well-known religious and historical painter. Under Francisco's instruction, Goya's skill with composition and delicate tones flourished.

Francisco also encouraged Goya to study and copy the royal portraits by Diego Velázquez, a court painter from the time of the Spanish Golden Age. Velázquez's influence on Goya's court paintings helped with his eventual success. Francisco Bayeu y Subías further aided Goya's career by helping him to find work with the Royal Tapestry Factory, creating model paintings. The tapestries decorated the homes of the royal family, and this led to his eventual employment with the Spanish royal family in 1786.

While traveling in 1792, Francisco Goya suffered from a serious illness and temporarily withdrew from the court. Though he survived, he was now deaf and possessed a darker view of society in Spain. He returned to Madrid, and in 1799, he created a series of 80 etchings, Los Caprichos.

Goya felt that Spanish society had become foolish and irrational, and the works illustrated his various complaints. In the most well known of these, 'El Sueño de la Razón Produce Monstruos' (The Sleep of Reason Produces Monsters), Goya draws himself sleeping and surrounded by monsters representing stupidity and immorality.

People celebrated his technique with etching and aquatint, the creation of tonal values, when the work was published, despite the subject matter. This series began Goya's practice of the ideals of Romanticism, a creative movement that focused on the use of imagination and emotion when making work. Goya produced a world of monsters, witches, and dream-like scenes in his series to criticize the superstitious beliefs of the Spanish people.

Even with his illness and the change in subject matter from his normal work, Goya remained a favorite with the Spanish royalty under King Charles IV. In 1799, he was given the position of First Court Painter by the King and was in charge of painting the majority of royal and noble portraits in the Spanish court. Much of his studies from his younger years revealed themselves in these works, particularly in the painting, 'Charles IV of Spain and His Family,' which was commissioned in 1800. Notice that Goya painted himself into this portrait in the shadows on the left of the painting, below. He also failed to paint the figures with much of a sense of glory. Instead, he was fairly realistic in his representation of the royal family, painting unheroic expressions and signs of age.

Several years after the royal portrait was painted, Spain fell into turmoil. Due to the lack of stability in the country, it was open for invasion, and Napoleon and his armies of France did so in 1808.

The occupation of French forces threw the country into unrest, and Napoleon's brother, Joseph I, was crowned King of Spain. Many Spaniards rioted against this new monarchy. Goya remained neutral on this issue, accepting commissions from the new French charge. Later, Napoleon's reign ended, and the son of Charles IV, Ferdinand VII, was restored to the throne.

This new king was tyrannical, reinstating the Inquisition and asserting an absolute monarchy. The new monarchy also questioned Goya's loyalty, and in response, he created two paintings depicting the events of the war, including 'The Third of May 1808.' Completed in 1814, Goya portrayed the aftermath of the Spanish riots against the French armies, showing them captured and in the midst of an execution. The way in which he composed the painting was one of its most remarkable traits; Goya used a dark background with a bright center figure, making the center figure seem holy and Christ-like. Unlike other paintings of the time, this work was not heroic, instead trying to demonize the French and show the Spanish as resistant but vulnerable in the face of death.

Also during and after the occupation of the French armies, Goya worked on a depiction of the horrors of war he saw around him. Starting with drawings, he eventually began a series in 1810 known as 'Los Desastres de la Guerra' (the Disasters of War). He comprised this series of 82 etchings as an outcry against the brutality of the French armies, as well as the continued corruption of Spain under Ferdinand VII.

Despite his proven loyalty, Goya's career in the court dwindled, and in 1819, he retreated to the outskirts of Madrid after receiving fewer and fewer royal commissions. Here, he focused on personal works in his home, Quinta del Sordo (the Dead Man's House). These works later became known as the Black Paintings due to their ominous, violent subject matter.

The most well known of these paintings is 'Saturn Devouring his Son,' a horrific depiction of a Greek myth where a titan eats his children to maintain power. Goya spent his retirement reflecting on the horrors seen throughout his life, particularly from those who maintained power, and the Black Paintings were a symbolic illustration. The political state of Spain continued to dissatisfy him, and eventually, he left Spain, retiring and spending his final years in Bordeaux, France.

The delicate tones, honest depictions of society, and dramatic scenes in Goya's work continued to inspire artists into the twentieth century, particularly modern artists, such as Pablo Picasso and Édouard Manet. Today, Goya is considered one of the most important Spanish artists in history, and his work is celebrated at museums around the globe.

Francisco de Goya was a Spanish romantic artist who lived and worked during the late 17th and early 18th centuries. He studied art under various established artists well into his twenties before finding any success, but eventually became the official painter to the court of Charles IV. He was known for his works both depicting the nobility and royalty of Spain and the political and social turmoil within his home country.

His use of imagination, emotion, and dramatic compositions define his work as a Romantic painter. Goya also used his skills as an artist to protest against the injustices of war. This also affected his subject matter, ending with the Black Paintings in his home outside Madrid.

Roman Temple Columns & Architecture | What is a Cella?