Elisa has taught K-6 grades and has two master's degree in Instructional Technology and Education.

Mary Shelley's 1818 novel 'Frankenstein' is an enduring tale embedded in contemporary popular culture, despite two centuries passing since its publication. Discover the use, reimagination, and adaptation of the novel to TV, film, stage, and music. Updated: 12/01/2021
Create an account

''Oh! No mortal could support the horror of that countenance. A mummy again endued with animation could not be so hideous as that wretch. I had gazed on him while unfinished; he was ugly then, but when those muscles and joints were rendered capable of motion, it became a thing such as even Dante could not have conceived.'' (Dr. Victor Frankenstein)

The popularity of Mary Shelley's novel and its various adaptions has been going strong for almost 200 years. The 'monster' has spawned thousands of spin-offs, ranging from discussions on the dangers of science interfering with nature to graphic novels. And with that comes the image, endlessly reproduced in everything from horror movies to breakfast cereals, of a green-skinned, flat-headed, groaning, lumbering giant with bolts in his neck.

In fact, Frankenstein's monster had none of those features. A description by the Swiss doctor Frankenstein states that, ''His limbs were in proportion, and I had selected his features as beautiful. Beautiful!-Great God! His yellow skin scarcely covered the work of muscles and arteries beneath; his hair was of a lustrous black, and flowing; his teeth of a pearly whiteness; but these luxuriences only formed a more horrid contrast with his watery eyes, that seemed almost of the same colour as the dun white sockets in which they were set, his shriveled complexion and straight black lips.'' 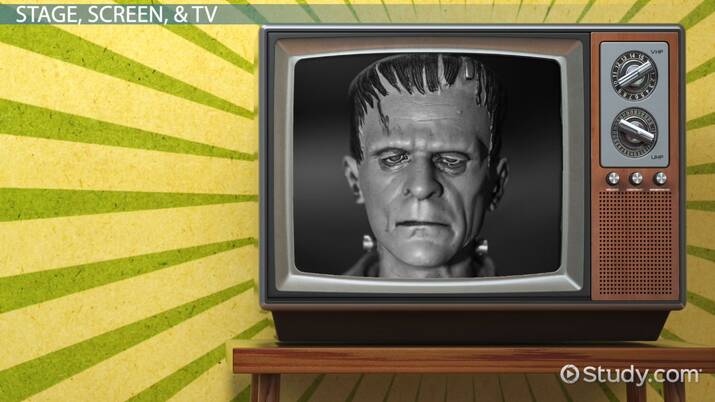 Try it now
Back
Coming up next: Frankenstein: Book vs. the Movies

Productions have been made of Frankenstein since before the days of the movie camera. An original theater production was mounted in 1823. Since then, numerous stage adaptations of Frankenstein have been written and performed all around the world.

Numerous books, poems, and stories have taken the idea of science gone wrong and twisted it into modern parables. In fact, the subtitle of Frankenstein is The Modern Prometheus. Prometheus gave fire from the Greek gods to the humans and was 'rewarded' by having his liver plucked out of his body every day by a giant bird. The intended message was that people were not supposed to tamper with the natural order, be it fire or reanimating the dead.

Frankenstein has been adapted into many forms including graphic novels, children's picture books, and modern adaptations of the story. Examples of Frankenstein-related books for children include Frankenstein Makes a Sandwich by Adam Rex and Frank N' Goat: A Tale of Freakish Friendship by Jessica Watts. The Frankenstein Series by Dean Koontz is an adult book emphasizing the theme of reanimating and creating something that should not be revived.

Let's say you need some songs for your Halloween party or your monster movie marathon about Dr. Frankenstein's monster. The following are ten popular songs about our favorite frenetic, freaky guy:

During Halloween, few can resist a big, scary character such as Frankenstein. As a result, people have been portraying Frankenstein every Halloween for many years. Even if you haven't actually read the novel, you likely have ingrained fears of unknown monsters. If Dr. Frankenstein calls his creation a ''demonical corpse'', that makes it prime costume material!

Was Frankenstein's monster a true zombie? Dr. Frankenstein, in creating a bride for his monster says, ''Then I realized what I was about to do. I was going to create a whole New Race...A Race of Monsters...of Evil Killers.'' The monster was created in a lab using bits and pieces of dead humans and was then reanimated.

The modern definition describes a zombie as ''a person who is believed to have died and been brought back to life without speech or free will.'' Mary Shelly's monster was very articulate. He also learned to speak, reason, and express about himself and his loneliness. Although he is a reanimated corpse, he does not fit the definition of a zombie very well.

All right, let's take a moment or two to review. As we learned, Dr. Victor Frankenstein exhibited ambition, fallibility, and a great degree of instability when he created his monster. It's at the core of why this story is so tied to the myth of Prometheus, who gave fire from the Greek gods to the humans and was '' rewarded'' by having his liver plucked out of his body every day by a giant bird, with the intended message being that people aren't supposed to tamper with the natural order.

Popular culture took his creation and adapted it to best suit modern interpretations of a demonic creature. Frankenstein has been adapted into numerous stories, movies, theater productions, and songs. The idea of Frankenstein as a goofy, lovable Herman Munster look-alike has been very popular for close to 80 years thanks to Boris Karloff. Dr. Frankenstein's monster should continue to be very influential in monster mystique for years to come.

Why Is Frankenstein a Classic?

The Modern Prometheus in Frankenstein by Mary Shelley | Theme & Analysis

Nature vs. Nurture in Frankenstein by Mary Shelley | Theme & Examples

Why Is Frankenstein a Classic?

The Modern Prometheus in Frankenstein by Mary Shelley | Theme & Analysis

Nature vs. Nurture in Frankenstein by Mary Shelley | Theme & Examples