Functions are vital in mathematics, but they can also be applied in the real world. Using detailed examples, learn more about functions and how they can be applied to real-world scenarios. Updated: 12/28/2021
Create an account

Do you have a different outfit that you wear each day of the week? If so, you might be surprised to learn that the relationship between the day of the week and your outfit represents a mathematical concept called a function.

In mathematics, we represent functions in many different ways; we can use words, tables, mappings, equations, and even graphs. Consider this example: If a state has a 6% sales tax, then we can use a function to calculate it. We can use the following equation to represent this function:

If we purchase a product for x dollars, then to calculate the tax, we would multiply x by 0.06, or the tax rate in decimal form. For instance, if you bought a shirt for $25, then you can calculate the sales tax by plugging in 25 for x.

We can also represent this function using our other representations. Because our purchase price can be any number, we could never list all of the inputs and outputs! Using a table or mapping wouldn't be the best method in this situation, but we can easily represent it graphically by simply graphing the equation T = 0.06x.

We see that there are many ways to represent a function, and each one depends on its context. Now that we are reminded what a function is in mathematics, let's talk some more about using them in real-world settings! 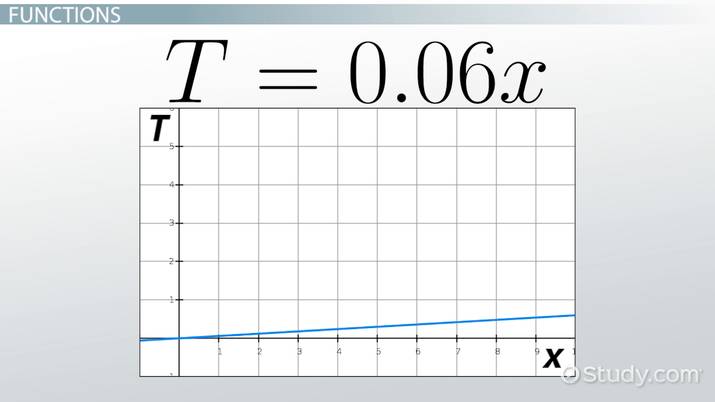 Coming up next: The Pythagorean Theorem: Practice and Application

Functions in the Real World

When it comes to recognizing functions in the real world, it is useful to think of the term ''is a function of'' as ''is determined by.'' You see, in a function, no input can be related to two different outputs, otherwise, given the input, we couldn't determine the output. Therefore, the input determines the output, so the output is a function of the input.

For instance, think about those outfits again.

Pretty neat, huh? You may have been familiar with functions involving numbers, but it's totally cool to see that the function concept can actually be applied to real world situations! Let's consider a couple more examples!

Suppose you and a friend are trying to raise money for your favorite charity and decide to have a cupcake sale. You bake a variety of cupcakes and sell them for $3 each. If we let the number of cupcakes you sell be your input and the total amount of money you raise be your output, we can represent this relationship using the following equation:

We see that the amount of money you raise is determined by the number of cupcakes you sell. This tells us that your total money raised is a function of the number of cupcakes you sell. Once you have a function in equation form, it can be used to determine all sorts of things about the situation. For instance, let's say you and your friend made 150 cupcakes, and you want to know the most money that you can make if you sold them all. To determine this, we simply plug 150 for x into the function and simplify.

We see that if you sell all your cupcakes, you can make $450 for your charity! That would be awesome!

Okay, let's take a look at another example. Let's consider birthdays. After all, who doesn't get excited for their birthday? Suppose you have a group of friends with the following birthdays:

A function is a relationship between two sets of elements in which no element in the first set relates to more than one element in the second set. In mathematics, we represent functions in a variety of ways; we use equations, words, tables, mappings, and graphs. We can also use these representations for functions in the real world. To recognize these functions, it is helpful to think of ''is a function of'' as ''is determined by.'' In doing this, we see that functions show up in the world around us all the time. They are extremely useful in applications for business, finance, engineering, and in everyday events, like remembering someone's birthday! It is definitely worthwhile to be familiar with functions and their uses in the real world.

How to Add, Subtract, Multiply and Divide Functions

Investment Opportunities in Stocks and Bonds

Math Function Examples | What is a Function?

How to Find the Value of an Annuity