This lesson looks at the functional health issues of the mechanical system. In other words, we examine the human body, why it fails and what happens when it does.
Create an account

Stand up and then sit down. Or I guess you probably have your headphones on, so you can just think about someone standing up and sitting down. Either way, the idea of a mechanical machine is now in your head. The act of standing up requires the activation of a particular part of your brain, which triggers neurons to activate, which triggers muscles to tense, causing your body to move. It is a fully mechanical operation, just like a machine.

Taking out some of that interpersonal stuff and focusing purely on the mechanical aspects, we can begin to define certain issues that were hidden before. Functional health can be defined as the ability to perform all of one's activities of daily living. Activities of daily living are self-care activities, such as bathing, dressing, using the toilet, grooming and feeding oneself. It's the stuff you have to do every day.

Therefore, functional health disability is difficulty performing, or requiring assistance from another to perform, one or more activities of daily living. In a mechanical way, the system is kind of lagging in an important way.

It is no mystery to anyone that as we get older, the body begins to wane. Your muscles just aren't as tight, your bones are a little more brittle and everything just sort of slides. Therefore, measuring the level of functional health disability is a concern because it allows those with the resources to determine who is in most need. 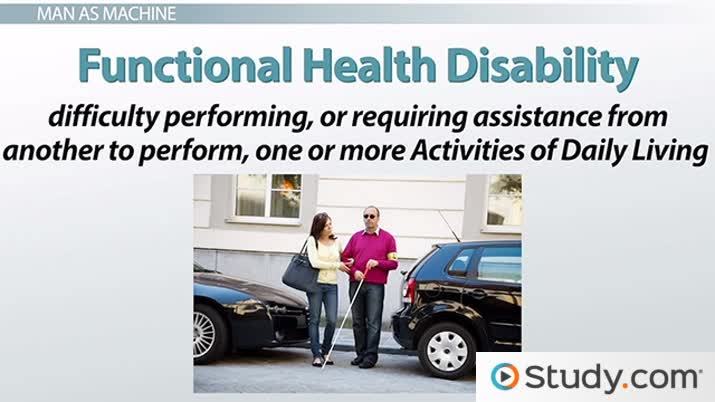 Coming up next: Health Care Treatment in Late Adulthood

There are multiple levels of functionality here. At the highest level, we have someone who is fully capable of doing everything on their own. These people have minimal disabilities and effectively manage everything. This would be Augustus, who is an older man who lives on his own. He is able to shop for his own food, has the financial abilities to function and is able to take care of himself and his cat, Mr. Mittens.

But what about Bob? Bob has few to no functional health disabilities. He is able to use the bathroom, dress himself and feed himself. However, Bob can't live on his own. His instrumental activities of daily living, such as managing medication, grocery shopping, preparing meals, using the telephone, driving, handling financing, housekeeping and doing laundry are all things a person needs to be able to do. Without these instrumental activities, a person can't really take care of themselves day to day.

Our example of Bob, who can't manage his finances and has difficulty obtaining medications and groceries, means living on his own just isn't possible. This might be due to a slowing down of the processes in Bob, such as early signs of dementia. Or it could be that he had become dependent on other people taking care of him, such as his wife, and now struggles to take care of himself.

The lowest level of function would be a person who is unable to do any of the activities of daily living or the instrumental activities. Here we have Clarence, who cannot bathe or dress himself, cannot use the telephone and cannot prepare his own meals. He would be helpless and likely perish if he were not placed in a care facility. There he would receive the necessary aid to help him.

Briefly, since many of these will be discussed more in depth in other lessons, let's look at some of the reasons why a person isn't functioning in tip-top shape.

Our first reason would be simple decline caused by age. As we discussed earlier, the whole mechanical system that is our body begins to slide as we hit advanced age. Estimates state that as many as three quarters of the people over the age of 75 will limit their activities due to some functional impairment. Nearly half of people 85 years and older will require assistance with more than one activity of daily living.

Another reason might be in cognitive decline with age. About 3% of people 65 and older have some form of major cognitive impairment. This rate doubles every 5 years, so that almost half of all people who are 90 years or older will have severe cognitive impairment. The brain controls everything, and when that doesn't work right, the rest of the system is impaired.

Lastly, we will give an all-inclusive physical impairment due to injuries. Here we have someone who was functionally living on their own until an injury of some kind. My great-grandfather was living on his own until he was 90, and then stepping out of his car, he took a bit of a fall and broke his hip. Following this, he wasn't able to get around as well and had to be placed in a home. A person just doesn't heal as quickly or as well as when they were younger.

Functional health disability is a difficulty performing, or requiring assistance from another to perform, one or more activities of daily living. Along with all of these, there are the instrumental activities of daily living, such as managing medication, grocery shopping, preparing meals, using the telephone, driving, handling financing, housekeeping, and doing laundry. Any or all of these functional activities can be reduced by general age, cognitive decline, or general health issues.

After watching this lesson, you should be able to explain functional health disability and why it happens to the human body.

What is the World Health Organization? - Definition, History & Purpose