Copyright
Lesson Transcript
Instructor: John McLaughlin
An organization's Organizational Culture is its system of beliefs that govern behavior. Examine functions, and the significance of the group's sense of identity, definition of boundaries, commitment, and rules and standards to the organization. Updated: 09/17/2021
Create an account

The Functions of Organizational Culture

Jane has a decision to make. She recently started her job at Carlson's Department Store as a sales associate. At Carlson's, all new sales associates must start in the returns department, and this is the first time Jane has been left in charge of the returns desk without a supervisor. Standing in front of her is an unhappy customer who is holding a broken clock radio and loudly demanding a full refund. The clock radio appears to be several years old and is missing some knobs from the front.

The irate customer does not have a receipt or any proof that he bought the clock radio at Carlson's. As Jane begins to ask the customer questions, he tells her if he doesn't get his money back right away, he will never shop at another Carlson's. Jane is not sure if her store even sells clock radios, but she must decide quickly whether or not to refund the money the man is demanding. What will Jane do?

The decision Jane makes will not be based on the training she received from Carlson's or from any written store policy. Jane's decision as to whether or not to provide a refund to this angry customer will be guided by her perception of the value that the culture of Carlson's places on customer satisfaction. Before we find out Jane's decision, let's find out more about organizational culture. 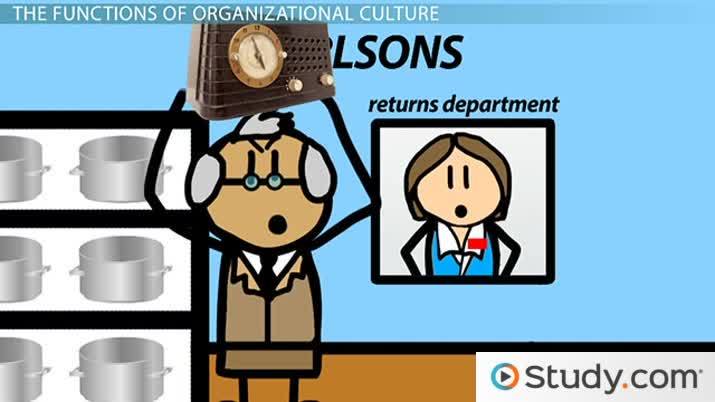 What Is Organizational Culture?

What Does Organizational Culture Do?

The Sense of Identity

Jane was told during her orientation that the number one goal of Carlson's is to delight customers by providing them with the best service possible at all times. When Jane puts on her Carlson's name tag, she feels like she is representing the high value that Carlson's places on customer service. When Jane goes the extra mile to assist a customer, she feels like her efforts match the goals of everyone who works at Carlson's.

When Jane shops at stores other than Carlson's, she always notices the differences between the way things are done at Carlson's and the way they are done at other stores. On her last visit to Fink's Department Store, for example, she saw a sales associate standing outside the front of the store talking on his cell phone. Although Carlson's has no written rules against it, Jane has never seen a Carlson's employee take their break anywhere but in the break room. It is understood by members of the Carlson's organization that the only time you should be in the presence of a customer is when you can provide them with assistance.

The culture of Carlson's Department Store places a high priority on sales. Before every shift, managers announce the sales goal for the day and then reveal whether or not the previous shift met their sales goal. Jane is aware of the importance of meeting these daily sales goals and is always looking for ways to increase the store's sales for the day. If Jane is helping a customer select an outfit, for example, she will always try to find the customer a pair of shoes to go with it. Jane focuses her efforts on helping the people on her shift meet their sales goal for the day even if it means staying late or working on her day off to cover for a sick coworker.

Let's get back to Jane's big decision. Although Jane is new to Carlson's, she has learned a lot about the Carlson's way to treat a customer by the culture she has observed. She has seen fellow sales associates receive praise for providing exceptional service to store customers and has heard stories about sales associates that went out of their way in order to please a customer. The culture she has observed at Carlson's makes Jane's decision easy. She asks the customer how much he paid for the clock radio, then quickly and pleasantly gives that amount of money to him in exchange for the broken clock radio. Jane later receives praise from her manager for handling the upset customer in the proper way.

Culture also generates commitment among members of an organization. Because they share common goals and work together to achieve those goals, people in organizations feel dedication to the group.

Finally, the culture of an organization acts as a social glue that provides unwritten rules and standards that define the rules of the game to its members.

Jane found out later that Carlson's had only recently discontinued selling clock radios. She also learned that the customer returning the clock radio was a regular shopper at Carlson's, and she saw him shopping there frequently after their encounter at the returns desk. Carlson's does not have an official returns policy; their culture dictates that employees use their best judgment and always put the needs of the customer first. Jane made the correct decision by allowing the return of the clock radio because of her correct interpretation of the unwritten rules of Carlson's culture.

After watching this lesson, you should be able to define organizational culture and explain its four functions.

The Balanced Scorecard as a Strategic Management System

Factors that Cause Change in Organizations: Planned and Unplanned