Fungal and yeast skin infections occur as fungi or organisms embed in the skin or grow on the surface. Learn the vocabulary associated with these types of infections, including ringworm, athlete fungal infections, and yeast. Updated: 11/22/2021
Create an account

When you look at your arm, you might notice the color of your skin, or a mole, or the coarseness of your hair. However, if you had goggles that let you see microscopically, you would see a world of bacteria and fungi teeming on your skin! These tiny tenants help to keep our skin healthy, but sometimes, less helpful species overtake this valuable hosting property, leading to various skin disorders. 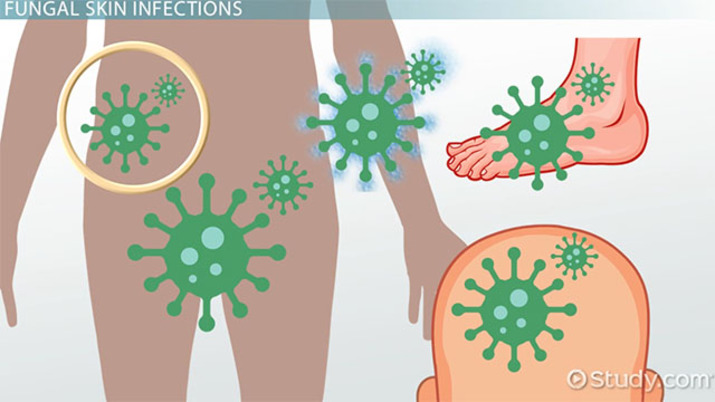 Tinea is a general term used to describe a fungal infection on the surface of the skin. Often, this generic term is coupled with another more specific term that tells you something about the location, appearance, or origins of the infection. For example:

Now that we have a basic understanding of the term 'tinea,' let's examine each of the aforementioned conditions in more detail!

The first two conditions we are going to examine are commonly referred to as 'ringworm.' That's because the specific type of fungus, named dermatophytes, causes red, raised, ring-shaped spots to form on the skin. But it is important to know, there are no actual worms present in this infection!

Tinea captitis is a fungal infection of the scalp and hair follicles that leads to circular, bald patches. Again, colloquially, this is known as 'ringworm on the scalp.' The dermatophytes cause mildly itchy, scaly patches to develop. Most often, tinea capitis is observed in younger children and, as fate would have it, is highly contagious, so it can spread quite quickly. The good news is that it is treatable! The combination of antifungals taken by mouth and antifungal shampoos applied directly to the scalp clear up the majority of infections.

Tinea corporis is a fungal infection on the body that causes the development of red, doughnut-shaped lesions. In layman's term, it is simply known as 'ringworm on the body.' This is the same infection as tinea captitis, but instead of the dermatophytes infecting the scalp, they infest the trunk, face, or extremities. Again, it is common in younger children and likewise treatable with antifungals.

We've examined a type of fungus that likes to prey on young children, so let's move on to fungi that prefer athletes! Tinea cruris is a fungal infection in the groin, inner thighs, and buttocks, which leads to redness and itching. Does this sound familiar? Well, you're probably already familiar with this condition, but know it as 'jock itch.'

How did it earn this nickname? Fungi like moist, dark, and warm environments. So, the perineal area of an extremely sweaty person, like an athlete, especially if he is wearing a protective athletic cup that prevents any ventilation, is fungi's dream come true. Once the fungi invade, the person begins to develop red, scaly patches that are extremely itchy.

Tinea cruris responds well to treatment with antifungal creams and ointments applied directly to the area. However, treatment is lengthy, extending over two weeks in most cases.

Another type of fungal skin infection that has earned a sporty reference is 'athlete's foot.' Tinea pedis is a fungal infection beginning between the toes, extending onto the foot, which causes itching, redness, and stinging. Again, athletes with sweaty feet wearing tight sneakers are often prone to this condition, but anyone with poorly ventilated shoes and sweaty toes can end up with tinea pedis. It is a highly contagious condition. To treat, topical antifungals are usually prescribed, although in severe cases, an antifungal medication taken by mouth may be needed.

Lastly, we will examine two conditions caused by a specific type of fungus: yeast! You may associate yeast with bread, baking, or beer, but it can also make itself at home on human skin. The first condition is called tinea versicolor but is also known as pityriasis versicolor. Tinea versicolor is a skin condition caused by yeast that causes either lighter or darker-colored spots to develop on the skin.

This condition is not harmful in that it does not cause any physical symptoms such as itching or pain. However, patients who develop this condition can become self-conscious, as their skin has notable spots in the infected areas. Also, tinea versicolor, unlike other fungal infections we've studied, is not contagious.

Areas affected are usually the trunk and upper extremities. Antifungals applied directly to the spotted areas tend to work nicely, clearing up the fungal infection. However, it can take several weeks to months for the skin to return to a uniform pigment.

The second yeast-based skin infection we will examine is termed candidiasis. Candidiasis is an infection of the skin with yeast leading to a red, itchy rash. Candida rashes are most often found on a baby's bottom! This is because yeast, a type of fungi, enjoy the warm, dark, moist environment that a wet diaper provides. Most of the time, Candida is the culprit for diaper rash, but it can also cause rashes in the skin folds of an overweight person. The mainstay of treatment is topical creams aimed at destroying yeast. These creams tend to be very efficacious if applied correctly.

In summary, tons of germs call our skin home, and most often, these microscopic tenants are benign or even helpful. However, when specific species of microscopic fungi infest our skin, it can lead to problems.

Specifically, when harmful fungi take up residency on our skin, the broad term used to describe the condition is tinea. Remember this generalized term is coupled with a secondary term that tells us specifically where the infection is located or symptoms caused by the fungal invader. For example, a fungal infection of the scalp is termed tinea capitis, of the body tinea corporis, of the groin tinea cruris or of the feet tinea pedis. A condition that is detailed by the symptoms versus the location is tinea versicolor, a fungal infection that causes patches of pigment discoloration to develop.

Lastly, candidiasis is a red, itchy rash caused by yeast residing on the skin. Again, yeast is a type of fungus, and all fungi love warm, dark environments. That's why Candida infections are found in the diaper region of an infant or the warm skin creases of an overweight adult.

Through the miracle of modern medicine, almost all of these skin invaders are able to be evicted. Either with topical creams or oral medications, most patients can become symptom free within a month!

After concluding this lesson, your goal should be to:

What is Ringworm? - Infections Caused by Trichophyton & Microsporum Fungi

The Five Senses & Their Functions

The Importance of Personal Hygiene