In this lesson, we will discuss how oxygen is transported through our body. Before we get into the details of oxygen transport, however, let's first consider why we need oxygen. Simply put, we need oxygen so our cells can use energy. The various cells of our body use oxygen to make ATP, and then that provides the energy for the cell to do work - for example, muscular contraction.

Every oxygen molecule takes a journey from our lungs to our cells. After we inspire the oxygen (that is, breathe it in), it diffuses into the blood flowing through our lungs. Blood flows through the lungs much like a stream flows through a summer camp. Kids may love to swim in the water, but there's a problem with oxygen and our blood. You see, oxygen's solubility in water is low and, therefore, not much can be dissolved in our blood. We can dissolve less than 1 ml of oxygen in 100 ml of our blood. That's not nearly enough to meet the huge metabolic needs of our tissues. Therefore, we need an alternate source of transportation for oxygen. This alternate source of transportation is hemoglobin, which is a complex protein contained within our red blood cells. With hemoglobin, we can carry 20 ml of oxygen in that same 100 ml of blood. Now that's a lot of oxygen! 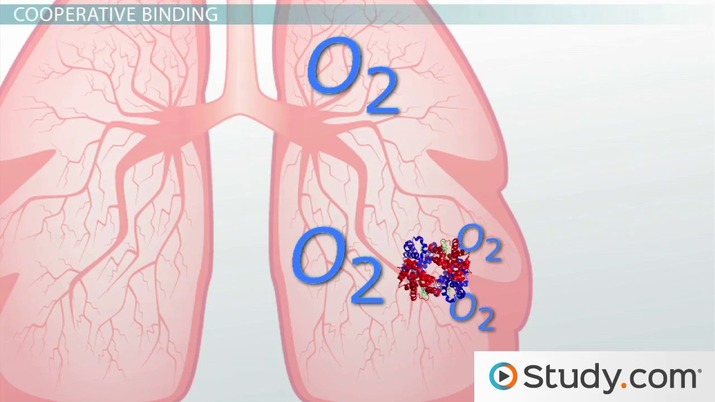 Coming up next: Gas Transport: Effect of Temperature, pH & Metabolism

Okay, so hemoglobin carries oxygen, but how does oxygen bind to hemoglobin? The way by which hemoglobin binds oxygen is referred to as cooperative binding. The binding of oxygen to hemoglobin makes it easier for more oxygen to bind.

Let's consider an analogy. Let's say you're looking for a movie to watch in a large theater complex with multiple cinemas. Your only criteria by which to judge each movie is the number of people in each cinema. Therefore, you pass by the cinemas without any people and you select a movie that has a lot people, as you figure it must be a decent show. Likewise, oxygen will bind more readily to hemoglobin as one or more molecules have already attached. More precisely, oxygen binding increases the affinity of hemoglobin for oxygen.

This is exactly what happens as our blood flows through the lungs. Since there's a lot of oxygen in the lungs, there's a good possibility that hemoglobin will bind to oxygen. Oxygen binding to hemoglobin changes the structure of hemoglobin, and that makes it easier for oxygen to bind. Additional oxygen binding further increases the affinity, resulting in the third and then fourth oxygen molecule binding. As a result of cooperative binding, almost all of the hemoglobin is saturated with oxygen - that is, fully loaded with oxygen after it passes through the lungs. It is important to note that the increased affinity of hemoglobin results from a conformational change, or a change in the structure of hemoglobin when the oxygen binds.

Let's take a look at what we call the oxygen-hemoglobin saturation curve, and this will help illustrate how cooperative binding helps transport oxygen in our body. The graph you see below illustrates the effects of an increased partial pressure of oxygen on percent saturation of hemoglobin with oxygen. The x-axis illustrates increasing oxygen partial pressure, where the PO2 in the lungs is about 100 mm Hg and the PO2 in the tissues is about 40 mm Hg. The y-axis illustrates the percent of hemoglobin saturation with oxygen. Notice the shape of the curve. It looks like an S, and as such we call it a sigmoid curve.

As we have a finite amount of hemoglobin, our blood carries only so much oxygen. As most of the oxygen-binding sites become loaded with oxygen, loading slows and the curve begins to level off. It is important to note the leveling off of the curve is due to what we call saturation of hemoglobin with oxygen. Binding of oxygen to hemoglobin is kind of like loading a moving truck. Loading goes quickly until most of the truck is full. When the space remaining is limited, loading slows down.

In summary, hemoglobin is the oxygen-carrying molecule that transports most of the oxygen in our body. Each hemoglobin molecule can bind up to four oxygen molecules. Hemoglobin exhibits what we call cooperative binding, as oxygen binding increases the affinity of hemoglobin for more oxygen. Increased affinity is caused by a conformational change, or a structural change in the hemoglobin molecule. The oxygen-hemoglobin saturation curve illustrates the effect of increasing PO2 on the percent saturation of hemoglobin with oxygen. Cooperative binding ensures adequate oxygen transport and delivery to our metabolizing tissues. At a PO2 of 100 mm Hg that exists in the lungs, almost 100% of hemoglobin is saturated with oxygen and the curve levels off.

Following this video, you'll be able to explain how cooperative binding of oxygen with hemoglobin occurs and its function.