Hemoglobin transports most of the oxygen in the lungs to the metabolizing tissues; however, various factors like increased temperature, acid, pH, 2,3-BPG, or carbon dioxide can decrease the oxygen hemoglobin is capable of transporting. Learn about gas transport, metabolism, the Bohr Effect, the role of hemoglobin in oxygen transport, and the effect of temperature on hemoglobin. Updated: 08/26/2021
Create an account

As you know, we breathe to get oxygen into our body. Specifically, our cells need the oxygen to make ATP, which then provides energy for work: for example, muscular contraction. Our red blood cells contain hemoglobin, which is a complex protein that carries the oxygen from our lungs to the metabolizing tissues.

Have you ever wondered what causes the oxygen to be unloaded? In this lesson, we will discuss the physiological factors that help hemoglobin unload oxygen as it goes through our metabolizing tissues. 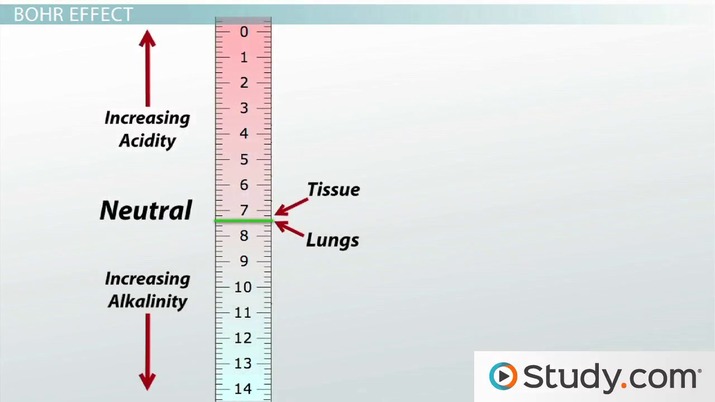 Coming up next: Autonomic Breathing: How Ventilation is Regulated

Effect of Temperature on Hemoglobin

Most people consider normal body temperature to be 37 degrees Celsius. While this may be accurate, body temperature is not the same everywhere in our body. For example, temperature can increase a few degrees in our metabolizing tissues as heat is released from the cells when they work.

Here's a question for you: does increased temperature alone release enough oxygen to meet our metabolic needs? As it turns out, other factors are needed to unload oxygen from hemoglobin in our metabolizing tissues.

Let's take a look at how carbon dioxide and acid help us out. Cellular metabolism produces carbon dioxide and lactic acid, which lowers pH to about 7.2 - now that's compared with a pH of 7.4 in the lungs. While this may seem like a small decrease, it represents a relatively large increase in acidity.

Carbon dioxide and decreased pH decrease the affinity of hemoglobin for oxygen. This phenomenon is referred to as the Bohr effect. The Bohr effect favors unloading of hemoglobin in our metabolizing tissues. Once again, unloading makes the oxygen available for our cells.

Red blood cells, like any other cell in our body, metabolize food to make ATP. In the process of making this ATP, red blood cells make 2,3-bisphosphoglycerate, abbreviated 2,3-BPG. (That's how I'll refer to it.) While it seems the cell is mainly interested in making ATP, 2,3-BPG serves a purpose as well. 2,3-BPG binds to deoxygenated hemoglobin more readily than it binds to oxyhemoglobin.

The affinity of hemoglobin for oxygen is decreased in our tissues by several physiological factors. Increased temperature, carbon dioxide, acid and 2,3-BPG all serve to decrease hemoglobin's affinity for oxygen, thus favoring unloading and making oxygen available for our cells.

At the end of this lesson, you will be able to:

What is the Glomerular Filtration Rate? - Definition, Function & Terms

How Cocaine Works in the Brain & Body