Hemoglobin, found in red blood cells, plays a key role in transporting oxygen from the lungs to the rest of the body. Explore how the oxygen transportation process occurs, and review how hemoglobin is loaded in the lungs and unloaded in metabolizing tissue. Updated: 08/23/2021
Create an account

Most people are aware of the fact that we breathe to get oxygen into our body. What may not be so clear, however, is how oxygen is transported to the various cells of our body - that is, after we breathe it in. Our cells need oxygen to make the energy-containing molecule that we call ATP. There's no time like the present, so let's take a look at how oxygen is transported in our bodies.

First off, blood is the avenue by which oxygen is transported through the body. You see, blood flows through our lungs much like a stream flows through a summer camp. Just like kids jumping into the stream, oxygen diffuses into the blood as it flows through our lungs. Enough oxygen diffuses into our blood to load every 100 ml of blood with about 20 ml of oxygen. That's a lot of oxygen, and we call this oxygen-rich blood. We need oxygen to meet our metabolic needs, and oxygen transport refers to the different ways by which oxygen is delivered to our metabolizing tissues.

Okay, we've established that our blood carries oxygen, but we need to examine how the oxygen is transported in the blood. By far, most of the body's oxygen is delivered in the blood bound to hemoglobin. Relatively little oxygen is delivered dissolved in the plasma. Let me quickly note that very little oxygen is dissolved, because its solubility in water is low. In this lesson, we're going to discuss the significance of both hemoglobin and dissolved oxygen in terms of oxygen transport. 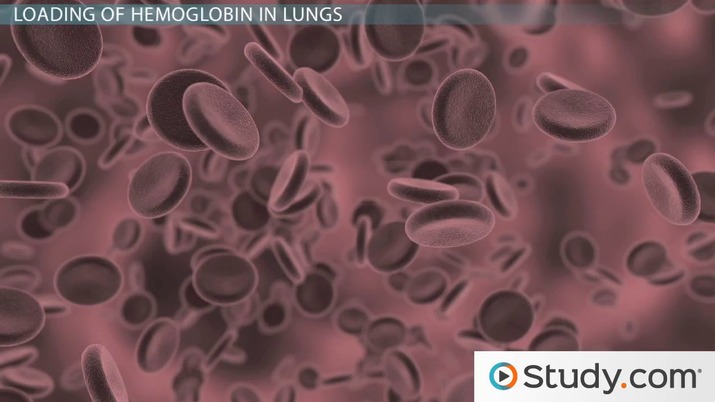 Coming up next: Gas Transport: Cooperative Binding of Oxygen with Hemoglobin

As I just stated, oxygen-rich blood contains 20 ml of oxygen in every 100 ml of total blood volume. Of that 20 ml, only 0.3 ml is dissolved in the plasma. That's not very much at all, and it begs the question, where's the rest of the oxygen? Well, the remaining 19.7 ml of oxygen is still in the blood, but it's bound to hemoglobin. Hemoglobin is a complex protein that is contained within our red blood cells. Approximately one-half of our blood volume is composed of red blood cells, and we've got between 12 and 18 grams of hemoglobin in every 100 ml of blood.

The binding of oxygen to hemoglobin as it flows through the lungs is referred to as loading. It's helpful to think of hemoglobin as being like microscopic boats that pick up oxygen in the lungs as if they were a loading dock. The boats of hemoglobin then deliver oxygen to the metabolizing tissues, where the oxygen is used to make ATP.

Unloading of Hemoglobin in Metabolizing Tissue

Now that we understand loading of hemoglobin with oxygen in the lungs, we can talk about unloading of hemoglobin as it occurs in the tissues. Unloading refers to the removal of oxygen from the oxyhemoglobin. As blood flows through the capillaries in our metabolizing tissues, oxygen diffuses out of the red blood cells. Oxygen is released from oxyhemoglobin, diffuses out of the red blood cell and dissolves in the plasma. The dissolved oxygen can then diffuse into the tissues, where it's needed to make ATP.

It's helpful to look at the equation for oxygen loading and unloading, so we can better understand how these processes work. So, here it is!

So, what do those terms mean? Hgb refers to deoxyhemoglobin - that is, hemoglobin without oxygen. O2 is obviously molecular oxygen. And, HgbO2 refers to oxyhemoglobin.

The process by which hemoglobin binds oxygen to form oxyhemoglobin is called loading. That's what happens in the lungs. Once in the metabolizing tissues, oxyhemoglobin is unloaded as oxygen is released and diffuses into the plasma and ultimately our cells.

The equation for loading and unloading is Hgb + O2 <--> HgbO2, where Hgb is hemoglobin, O2 is oxygen and HgbO2 is oxyhemoglobin. Once again, the overall direction of the reaction is determined by the relative concentration of oxygen.

Following your viewing of this video, you'll be able to:

Structural & Functional Changes of the Respiratory System Due to Age

Carbon Dioxide Transport in the Blood

What Are Pulmonary Function Tests?

The Mechanisms of Hormone Action