Middle adulthood is a time of great change for most people. But men and women experience those changes differently. In this lesson, we'll take a look at the way gender impacts middle age, including the famed mid-life crisis and gender crossover.
Create an account

Courtney and Mark have been together for a long time. They are in their 40s now, and both are struggling a little bit with the changes going on in their lives. They are both working longer hours than they ever have because they are both in higher positions at work than they ever have been. Their children are old enough to drive and are getting ready to go to college.

Courtney and Mark are in middle adulthood, also called middle age, which is the time of life between ages 40 and 65. During this time, people change in many ways: they physically begin to show signs of aging, and they often find that they are at the highest point in their careers and their children are often growing into adulthood. These and many other changes can have an effect on people.

Let's look closer at how gender plays a role in middle adulthood. 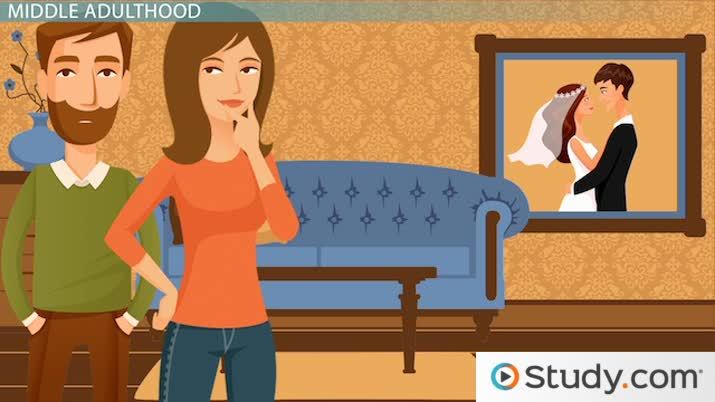 Coming up next: Job Performance, Career Change, and Unemployment in Middle Adulthood

Mark has a bald spot that wasn't there ten years ago, and he's gained some weight so that he has a bit of a paunch. In short, he looks like many men in middle age. But Mark isn't handling it very well. He doesn't like that he feels and looks older. He's bought himself a sports car and likes to go roaring through the streets in it.

Men, like Mark, begin to fear that they are less attractive to the female half of the population and that they are less masculine than they were in their youth. They often respond with a need to prove their manhood. The stereotype of the man in middle age who buys a sports car (like Mark did) and finds himself a young woman is based on the reality that men feel the need to show that they are still virile.

For women, the situation can be less obvious. A woman's gender identity is often tied up in being a mother and wife. They feel that being a mother is what makes them a good woman. But in middle age, children are often growing and moving out of the house. Take Courtney's children: they are very independent, and they will be off at college in just a few years.

As children become less dependent on their mothers, the mothers can begin to feel uneasy or question what they should do if they are not defined on a daily basis by their role as caretaker. Courtney has already begun feeling a little depressed because her teenage kids don't seem to need her anymore.

Talking to a counselor can help both men and women deal with the changes in middle adulthood and to figure out how to constructively deal with their negative emotions surrounding their mid-life crisis. For example, with the help of a psychologist, Courtney might be able to see her children leaving the nest as an opportunity for her to pursue things she's always wanted to do, like run marathons or travel to Italy.

So, during early adulthood, people experience their mid-life crises differently depending on their gender. Is that the only gender changes that occur during middle adulthood?

According to psychologist David Gutmann, no. Gutmann proposed the theory that as people age, each gender takes on the other's traits and roles. In other words, people's gender roles (or stereotypical behaviors for one gender or another) cross over during later middle age.

According to Gutmann, as Mark and Courtney age, their personalities will become the opposite. Men, like Mark, become gentler. Mark might be more willing to talk about his emotions, or he might pay more attention to Courtney's needs (though his love of sports will probably stay the same).

Women in later middle age, though, become bolder and take more risks, according to Gutmann. Courtney might begin to assert herself and tell Mark what she really thinks. She might do things for herself, like take a trip on her own or let Mark make himself dinner every once in a while.

It's a great idea, but most research has shown that gender crossover doesn't actually happen. At least, not to the extent that Gutmann believed it did. There is a blurring of lines between genders during later middle adulthood, and so Mark might be okay with washing the dishes more often, and Courtney might join a running group without Mark, but their personalities won't change enough to cross over.

Middle adulthood is the time of life between ages 40 and 65. Men and women experience this time of life differently. Both genders can have a mid-life crisis, but while men often feel the need to prove their manhood, women tend to worry that they are less of a woman because their children are not as dependent upon them. In addition, gender roles become less rigid than they were earlier in life, though a complete gender crossover does not happen.

The Role of the Extended Family in Late Adulthood