Copyright
Lesson Transcript
Instructor: David White
Gender stereotypes, like those portrayed in the media, have a powerful influence on how we express ourselves and understand others. Through this lesson, you will learn how to define these stereotypes and explore some examples of how they shape our social lives.
Create an account

What Is a Stereotype?

When you think of the classic image of the 1950s American housewife, what comes to mind? Odds are good that she's wearing a dress, has perfect hair and makeup, and might even be cooking or serving a meal. Of course, it's entirely unrealistic to imagine that every American housewife of the '50s looked this way, particularly after managing a house and taking care of children all day, so why is it that this is the classic image? The answer to that question has a lot to do with the media and the ways in which gender stereotypes are portrayed.

A stereotype is a very simple understanding of what a person or thing is or should be. The word comes from an early form of commercial printing in which blocks of text were printed using a metal template capable of printing multiple pages from a single plate. Like stereophonic sound takes a single source of music and reproduces it exactly through many different channels, stereotype printing uses a single template to reproduce a printed page exactly the same each time. When applied to people, a stereotype is like a template that can be reproduced and will look or act the same as the template.

Whether or not we know it, we all use stereotypes to simplify the otherwise complex things that we encounter every day. For instance, each person is unique and complicated, so to make it a little easier to form opinions about new people or groups, we operate to a certain extent on stereotypes in order to form a basic understanding of each person or group of people. 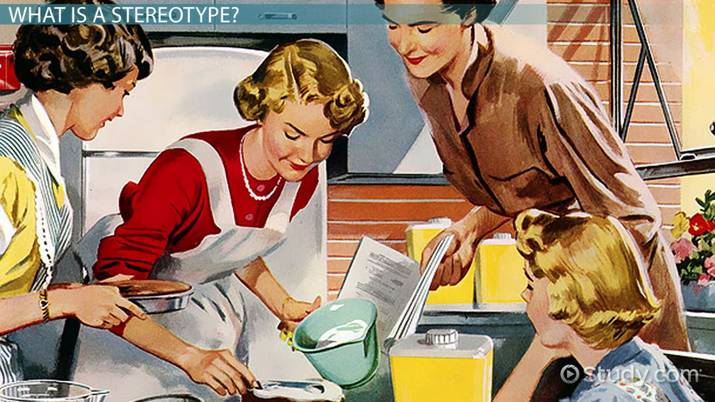 Gender Stereotypes in the Media

The media plays an important role in how stereotypes are formed because people tend to use the media as a benchmark for their own appearance, behavior, and understanding of the world around them. This can be particularly problematic when it comes to how we understand the incredibly complex and nuanced concept of gender. The classic housewife portrayed in shows like Father Knows Best or Leave it to Beaver was expected to look her best at all times and be subservient to her husband. This stereotype limited the social role of women to wife and mother, hardly ever acknowledging that women could be anything else.

Though strong in the 1950s, gender stereotypes in the media have been an element of every decade, including the present. For instance, print and television advertisements use gender stereotypes extensively, largely because those ads have a certain audience. This is most obvious with children, who are an important demographic for advertisers. When you see commercials advertising children's toys, more often than not you're going to see girls playing dress-up or with dolls, while boys play with trucks or action figures. These ads are operating on old stereotypes and cultural norms that tell us boys play with masculine toys, like trucks, while girls like more feminine toys, like dolls.

Gender stereotypes tend to disproportionately affect women and girls, but that doesn't mean that men and boys aren't affected. For example, a common joke on many sitcoms or comedic films is the sensitive or crying man. This joke often works because of how we understand gender roles. A gender role refers to the collective standards and expectations that guide the behavior of men and women in society. In simple terms, gender roles are society's way of telling us what is and isn't acceptable for men and women. As a stereotype, men have historically been portrayed as strong and stoic, which is why, even in the present, jokes about sensitive or emotional men often effectively amuse. Those characters violate gender roles and stereotypes.

Gender stereotypes portrayed in the media have a strong influence on how men and women behave, but they also have considerable influence on our understandings of gender expression. It's important to keep in mind that biological sex (male/female) is different from a person's gender expression, which refers to the way that individuals demonstrate the gender with which they identify. For example, assuming that they are fully clothed, how do you know whether someone is a man or a woman? Chances are you look at the clothes they're wearing, how they style their hair, whether or not they're wearing makeup, and so on. These signs usually tell you whether someone is a man or woman, but they don't necessarily tell you whether they are male or female.

This is a relatively new and very complex concept that can be difficult to wrap your head around, especially when the expectations of gender seem to be changing all the time. The reason that this changes is because gender is a cultural construct, which is defined as the characteristics and signs that societies attach to certain ideas. Stereotypes and cultural constructs are kind of like a cycle in which one continuously informs the other. In the case of the media, these two concepts work together to tell us how men and women are supposed to appear and conduct themselves.

This is best illustrated in the many current reality shows about fashion design or models. In many ways, these shows reflect a reality that is heavily informed by stereotypes about feminine and masculine beauty. Despite being unattainable for most people, they reinforce standards for beauty and establish signs and symbols that help viewers interpret gender expression, which they are then likely to apply in the real world.

In a broad sense, a stereotype is a reductive understanding of a person, thing, or idea. Stereotypes are common in television, film, and advertisements. They tend to serve different purposes depending on the context, but one of the areas most influenced by stereotypes is in our understanding of gender roles and gender expression. These are cultural constructs that are often used by societies to encourage men, women, and children to behave in a certain way in order to fit into the cultural expectations of their gender.

The Impact of Socialization on Gender

Violence and the Media: How the Media Impacts Violence

Understanding the Impact of Gender Differences in Social Development