Genetic linkage is a key principle in understanding the inheritance of traits. Why do some characteristics always seem to occur together? Dive into this lesson to see exactly what it means for genes to be linked.
Create an account

Genetic linkage is the coupling of two genes' patterns of inheritance because they are located on the same chromosome.

But what does that actually mean? 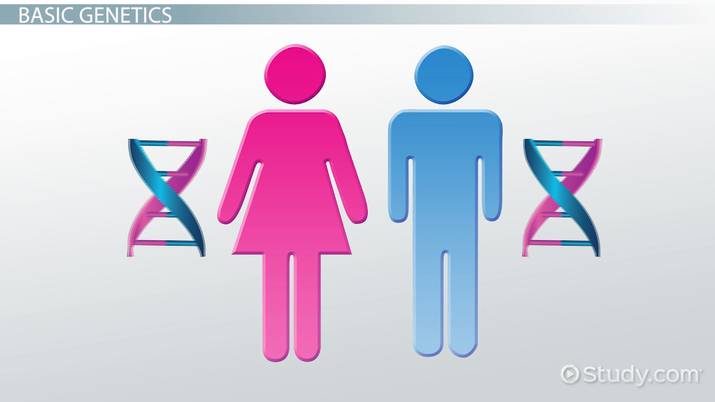 The recipe of life is written in a DNA code. Long strings of DNA form genes. Each gene codes for part of the human recipe. Since there are different versions of genes, called alleles, we each have a slightly different recipe, which makes us unique. Our genes are organized into 23 chromosomes. Each chromosome is a long string of many, many genes attached together. Humans have two copies of each of the 23 chromosomes, and thus, they have two copies of each gene.

Genetic information must be passed along to the next generation. Humans reproduce sexually, and the mother and father each contribute one copy of each gene. Thus, the resulting offspring will correctly have two copies, one from each parent. In order to only pass along one copy of each gene, the gametes, which are just egg or sperm cells, undergo a process called meiosis that splits the DNA in half.

In most instances, it is a 50/50 shot determining which copy is included in each gamete. However, since chromosomes are the traveling unit during meiosis, some genes have to travel together if they are on the same chromosome. In other words, they are genetically linked.

Remember, genes often come in more than one allele. This means that it matters which of the two copies gets packaged in a gamete, since the two copies might be different alleles.

If a person (gamete) needs one copy of each month (gene), they are given a full attached calendar unit because it is easier than distributing each month individually. However, this means that the Arctic fox picture is always passed together with the puppies picture. They are linked. Nobody gets the Arctic fox and the summer garden pictures (alleles) because those are on different calendars (chromosomes).

The monkey wrench in this simple lesson is recombination. This is a process early in meiosis where the two versions of a chromosome swap some DNA. In our case, if the red hair gene gets swapped with the blue hair gene, then red eyes will now be packaged on a chromosome with blue hair. Now these alleles are linked instead of the original red alleles. It is truly a game changer.

Genetic linkage is caused when two genes are located on the same chromosome. A chromosome is a long string of many, many genes attached together. The two genes will travel together during meiosis, which is important for separating chromosome pairs. This means that the linked alleles, a different version of genes which are often inherited together, will occur in the same gamete, egg or sperm cells, more often than if the genes were on different chromosomes, which we can figure out by looking at how often they occur together in new offspring. But, as we discovered, there's a monkey wrench that can be thrown into this whole thing: recombination, which is a process early in meiosis where the two versions of a chromosome swap some DNA. It disrupts typical genetic linkage, but it can really be called a game changer.

What Are Genes? - Definition, Types & Function