It's not just what's in your genes. In this lesson, we'll begin to explore how some phenotypes are influenced by the interaction between a genotype and the environment. Further, some organisms rely on phenotypic plasticity to change in response to the environmental changes.
Create an account

You may have heard that your genes govern who you become. You may have even blamed or thanked your genes for a few things. Your height, your personality, your dimples - these are all a reflection of your genetic makeup. That's true, to a point, but it's not the whole story. After all, a set of identical twins aren't necessarily identical. Let's take for example a set of identical twins, who have identical DNA, and one of the twins enjoys sunbathing and tanning beds and the other does not. The twin who takes a liking to harmful UV rays has this orangey glow, some extra wrinkles, and a higher risk of skin cancer. The other identical twin does not. Even with the same genetics, these two individuals are individuals at the end of the day. They like different things. They will look a little different. This is due to the fact that the environment, in addition to genetics, also plays a major role in many phenotypes. 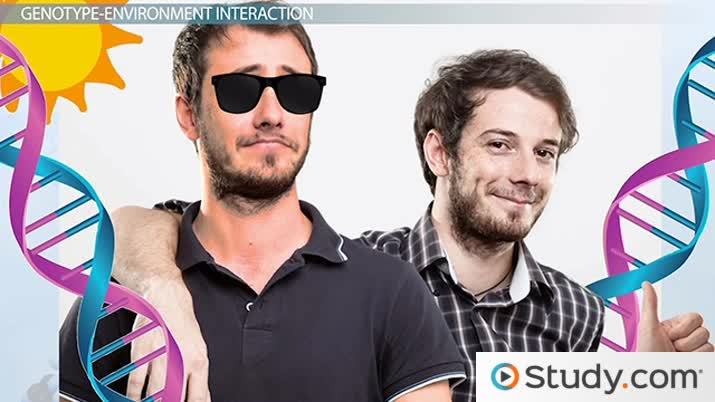 Coming up next: The Broad-Sense Heritability Equation

So how much does the environment influence a phenotype and how much of it is actually due to genotype? The answer isn't so simple. Not all traits are multifactorial and not all traits are influenced by the environment. But, you've likely thought about this before. Yes, your genetics do play a role in your metabolism, but it also matters if you exercise and what kind of dinners you typically eat.

The main point here is that one genotype can actually have this range of phenotypes because the environment contributes to the phenotype, making the trait multifactorial. This point has a specific name. Phenotypic Plasticity is the change in a phenotype as the result of environmental conditions.

Phenotypic plasticity exists in lots of organisms, but it is a common and easy thing to observe in plants, so they are typically the best example. After all, plants are stuck in the ground, in one place, and they have little control over their environment. Unlike us, they really can't choose what to eat and they can't get up and walk away if they don't like their environmental conditions. If you don't like the freezing cold weather in northern Maine, you can just jump on a plane and head to Cancun (well, at least theoretically). But plants don't have it that easy. Therefore, the environment really is going to play a large, obvious, and scientifically observable role in many plant phenotypes.

Additionally, phenotypic plasticity means that the phenotype of a genotype changes due to the environment. That's easiest to study if the genotype is exactly the same. It's hard, and somewhat impossible, to get a bunch of identical humans, and I'm not sure you wouldn't want to do that anyways. It's not as hard to obtain a set of almost genetically identical plants. That makes it easier to study how the environment can influence a phenotype when a genotype remains constant.

Here's a simple example of how phenotypic plasticity might work in a field full of genetically identical flowers. Now, these pretty flowers grow best in the sunshine; however, some are growing under the shade of trees while others are growing in the middle of the field. Understandably, the ones growing in the sunshine are taller while the ones under shade are shorter. In fact, there is a wide range of height in these flowers if you survey the whole field. If you want to plot the heights of these flowers, you'd find a continuous variation in height. How would you know if this was due to phenotypic plasticity, or if this was just an example of polygenic inheritance - a type of inheritance that produces a similar-looking bell curve?

Well, remember that phenotypic plasticity is the influence of the environment on a trait, while polygenic inheritance is solely a genetic influence. So, let's take out the environmental differences and see what happens to the trait. If you collected genetically identical flowers and you grew them in a greenhouse under identical conditions, so that the sunshine was no longer a factor, you might see that the height in these flowers now has less variance. If you plotted this on the same graph, you'd see that there is less continuous variation. There's still some variance because it's impossible for all the plants to be treated exactly the same. However, the variance is obviously less. This shows that the environmental conditions were influencing flower height and that this trait exhibits phenotypic plasticity.

You might be asking yourself, isn't phenotypic plasticity just a flower adapting to its environment? Isn't this just evolution in slow motion? Not exactly. The difference in these phenotypes in this one organism isn't due to a change in genetics over a length of time. To demonstrate this, I'll give you another example in plants. Let's say there is a tree that produces small seeds in years when there is a drier climate. The tree makes smaller seeds to conserve resources, even though these seeds are not as successful at growing into offspring. In years when there are wetter seasons, this identical tree will produce larger seeds that are more successful. It's the same tree, so the genetics of the tree have not changed, but the climate, or environment, has. Changes aren't due to evolution in this organism, because they aren't due to changes in genetics over time and this is the same exact tree. Rather, the changes are a direct result of the environment affecting changes in the organism when the genetics have stayed the same.

That said, the plasticity of the species can help it survive as it changes its phenotype in response to the changing environment. So, although this one tree isn't evolving by itself, the species as a whole likely selects for the more 'plastic' tree. You might not think that calling someone 'plastic' could be a compliment, but it really is here. You can see how being phenotypically 'plastic' can be an advantage to a species because it means the organism can adapt to changes in the environment and still survive.

Let's review. In this lesson, we discussed how one genotype can actually give rise to multiple phenotypes. Some phenotypes, or traits, are multifactorial. Multifactorial describes a trait affected by two or more factors, either environmental or genetic. Therefore, multifactorial traits could simply be a polygenic trait, or it could be a trait that is caused by a Gene-by-Environment interaction. Gene-Environment Interaction describes how the genotype and the environmental conditions surrounding an individual can influence a phenotype. In some organisms, especially in many plants, Phenotypic Plasticity can describe the change in a phenotype as the result of environmental conditions as one genotype has multiple phenotypes depending on changes in the organism's environment.

Completing this lesson should help you to accomplish these objectives:

Life History Theory & the Role of Natural Selection in Traits

An Overview of Cell Communication

Role of mRNA in Protein Synthesis