The early settlement of China began with nomadic groups transitioning to agrarian life and growing into ever-larger populations. Follow this development of ancient Chinese civilization centered around the geographical features of the Yellow River and the Yangtze River. Updated: 11/03/2021
Create an account

Chinese Geography and the Neolithic

Just like everywhere else in the world, China did not just become China the day that people moved in. There is evidence of a human ancestor called 'Homo erectus' living in China many millennia earlier. However, the oldest human remains in China have been dated between 18,000 and 11,000 BC. These early humans were nomadic, meaning they travelled continuously for food rather than settling in one place. This changed around 10,000 BC, when people adopted a sedentary lifestyle, living in one place with non-mobile homes. The period when humans first transitioned from nomadic to sedentary lives is the called the Neolithic Era.

The Neolithic was characterized by a major development that allowed people to stay in one place all year long: agriculture, or the domestication of plants and animals. Through farming, people could raise enough food so that there was a constant supply and therefore no need to move.

The ability to start farming was usually tied to geography. In China, two major river basins provided the abundant resources, fertile soil, and natural defenses needed for people to safely settle down and start building small societies. These rivers were the Yellow in the north, and the Yangtze in the south. It would not be an overstatement to claim that these two rivers are responsible for the rise of Chinese civilization and they have played an important role in Chinese culture to this day. 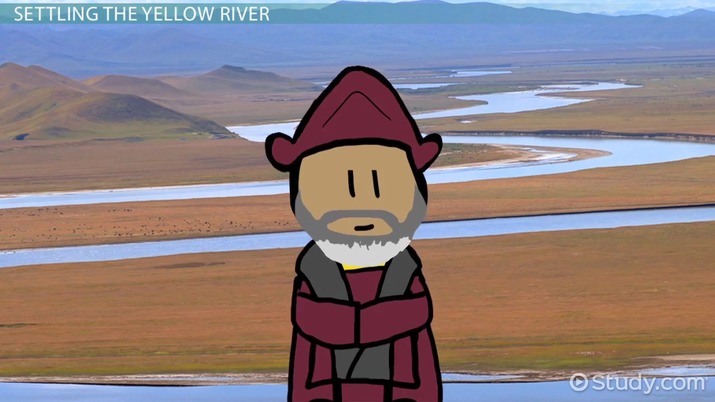 Coming up next: Unification of Northern China under Shi Huangdi of the Qin Dynasty

In the northern half of China, the Yellow River flows over 3,000 miles from west to east and into the Bohai Sea, near the Pacific Ocean. It floods periodically, filling the river banks with nutritious, fertile soil, making it perfect for agriculture.

The first notable Neolithic culture in China are the Jiahu people, who first started farming the grain millet around 7000 BC. For many centuries, millet was the primary crop of northern China. Little is known about the Jiahu, but they were replaced as the dominant power by the Yangshao culture, which lasted from roughly 5000 - 3000 BC. As new cultures emerged, the Yellow River became a central point of power because it had the best lands and resources.

With the rise of the Yangshao, many of the most ancient practices that the Chinese people today consider part of their culture began. Early forms of writing were developed, along with the practice of using cracked bones to predict the future. People wrote on the bones before tossing them in a fire, which caused them to crack. Bone is more durable than paper or cloth, so many examples of Yangshao writing survived. Although still a relatively small culture, the Yangshao developed new techniques of pottery, bronze, and stone carving and expanded across the Yellow River basin.

For modern-day Chinese, cultures like the Yangshao that developed early societies along the Yellow River are remembered through a mixture of facts and legends. They are heralded as the origins of traditional Chinese society, and the Yellow River remained a focal point of Chinese identity throughout history.

Around the time of the Yangshao culture, early Chinese people began talking about the importance of the river, incorporating into their mythology with beliefs that the river flowed from heaven onto Earth so that people could survive. There were even myths about great men who journeyed so far upriver that they ended up in the stars. They also began the practice of associating the periodic flooding of the Yellow River with divine omens. This had a major influence on Chinese history because the flooding of the Yellow River was often taken as a sign that the emperor had lost the divine right to rule and could be overthrown.

This period also saw the rise of important figures who were probably based on real people, but were also remembered through exaggerated myths and legends. Notable amongst these is Shennong, Emperor of the Five Grains, a legendary figure who invented agriculture and medicine and set important precedents for the marks of a good leader.

After the mixed mythologies and histories of these early kingdoms, certain societies along the Yellow River became powerful enough to form dynasties, empires ruled by one family line. The first dynasty, a semi-legendary compilation of historic and mythological stories, was the Xia Dynasty, which lasted from roughly 2070 BC to 1600 BC. They were replaced by the Shang Dynasty, which ran until around 1050 BC and is the first fully-confirmed dynasty of China. By this point, traditional Chinese culture was well established and the Yellow River secured as a central part of Asia.

But wait, the story's not over yet. Remember: there were two major rivers that prompted the rise of Chinese societies. In the south, the powerful Yangtze River, the longest river in Asia, flows from the west southeast into the East China Sea, near modern-day Shanghai.

The Yangtze River Basin had developed a significant population by 4000 BC, after local societies began the process of farming rice. Rice was a major staple for the people of southern China and really, one of their only agricultural products. People along the Yangtze River relied more on fishing and soon became very accomplished sailors and navigators.

Originally, the early societies that developed along the Yangtze River were very different from those in northern China. Many Yangtze cultures practiced traditions like tattooing and painting their teeth black. However, by 800 BC, the north had become powerful enough that many of their customs began influencing the Yangtze area and southern Chinese adopted more traditional Chinese culture. Throughout Chinese history, the Yellow River was seen as the center of traditional Chinese culture, but the Yangtze always had a very special place as a spiritual center of beauty, harmony, simplicity, and timelessness. Rice, as well as the southern tradition of drinking tea, also moved north and became staples of Chinese identity as well.

In the Neolithic Era, around 10,000 BC, early humans in China moved from nomadic, wandering lifestyles to a sedentary existence by settling down in one place. Where they chose to settle was a matter of geography. Two major river basins, belonging to the Yellow River in the north and Yangtze River in the south, provided abundant resources, fertile soil for farming, and natural defenses for safety.

Early people were able to use agriculture to stay in one place and start building small societies. Along the Yellow River, Neolithic cultures like the Jiahu and the Yangshao created the first practices that would become traditional Chinese culture. They farmed the crop millet for food and are credited with discovering medicine and fortune-telling, partly because of legendary leaders like Emperor Shennong.

As societies became organized enough to form empires, the first dynasties arose, including the Xia and Shang Dynasties. Along the Yellow and Yangtze Rivers in the south, early societies grew rice as the main crop and relied heavily on fishing. Although originally, the people along the Yangtze and Yellow Rivers were very different, by roughly 800 BC, they had influenced each other enough that they could share one cultural identity as the Chinese.

Unification of Northern China under Shi Huangdi of the Qin Dynasty