View bio
In this lesson, you'll consider why geographers take an interest in the religions of people around the world. We'll also discuss how conflicts arise between groups with different beliefs and experiences. Updated: 12/21/2019
Create an account

What will you do with your time today? What will you wear? How do you understand the meaning of your life and your existence? Who will you marry? For many people in the world, religion shapes much of their daily life as well as the big questions, like why am I here, how should I behave, and what happens when I die.

This lesson explores the geography of religion including the distribution of religion in different regions of the world. We'll take a look at the political and social impacts of beliefs and how they can contribute to or alleviate conflict and violence. 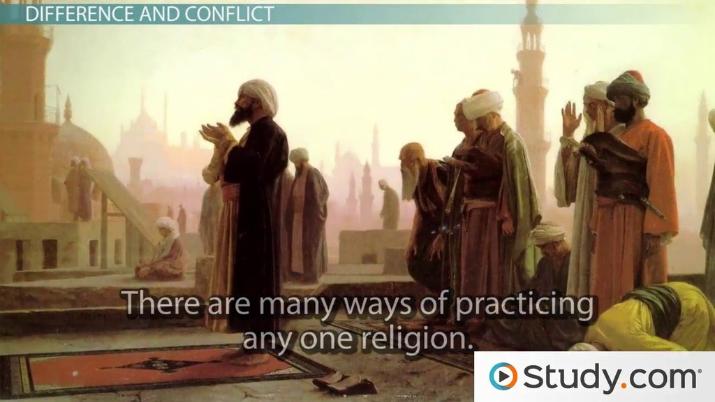 Coming up next: Material Culture in Sociology: Definition, Studies & Examples

Geographers don't look at religion with the goal of altering, judging, or influencing the beliefs of others. Their aim is to more fully understand how religious beliefs and practices affect the people of that society and region.

For instance, a geographer might observe how laws and social norms vary by region, and how this is connected with the religiosity of that area. At the time of this lesson, a debate over same sex marriage has divided certain states, while other states have allowed marriage licenses to be issued. Some states have taken up the mission to ban it. Whether a person should be able to marry a person of the same sex is often discussed within religious context. Some states will have more citizens that find same sex marriage against the beliefs of their religion, and this will affect which candidates get their vote. Similarly, abortion often raises intense political debate among those from different religious perspectives.

Geographers take an interest in how religious a certain area is based on factors such as professed belief, attendance at services, and other measures of religiosity. Nonbelievers and atheists will also capture the attention of geographers, who seek to understand both the adherence to and the rejection of religion.

In many cases, numbers of people in a particular religion are not easy to measure. For instance, in one region, a person may be considered a certain religion at birth, whether or not they ever participate in the activities of that religion. Another religion may only count those who experience a certain rite of passage.

What is more certain is that some regions of the world are more likely to have high numbers of one religion over others, while some regions will be more diverse. For instance, in the Americas and in Europe, Christianity is the religion of the vast majority. African countries overall are roughly split between Christianity and Islam, with ethnic religious and nonreligious people making up a minority. Asia, as a continent, includes many different religions as part of the whole area, although certain areas have concentrations of those who are Muslim, Hindu, or Buddhist. Looking at this data can help geographers understand the distribution of certain beliefs and practices, particularly when they look into more detailed levels of information beyond just continental trends.

Religious identity is not always separate from concepts such as ethnicity. In the case of someone who refers to themselves as Jewish, for instance, this could mean their religious beliefs or it could mean their ethnic identity, even if they do not practice the religion. It could also refer to both religion and ethnicity.

Religious and ethnic identity can affect every aspect of a person's world, from how they spend their time to how they dress and eat, what values guide their everyday actions, and what meaning they give to life and death. It can also influence the politics of the world around them, and how a person perceives their reality.

Imagine that each person is holding up a certain lens between themselves and the world around them based on their past experiences and beliefs. This shapes how we understand people and events and even the meaning of life and death.

There are many ways of practicing any one religion. Most religions place a good deal of attention on sacred religious texts. They may also value the wisdom of leaders in the faith. Different interpretations of what the texts mean and different approaches of leadership can influence how a person expresses their beliefs. Whether a particular region is dominated by one religion or another may also influence the politics of that area.

In the case of same sex marriage, not everyone who considers themselves religious will share similar views, even within the same overall religion. Some denominations of Christianity have opened their doors to same sex couples, while others debate how to address the issue of acceptance in their community. For instance, at the time this lesson was created, the United Church of Christ holds a position of accepting and sanctioning same-sex marriage, while some other Christian churches, such as the Methodist church, American Baptist churches and the Southern Baptist church, prohibit this. The population of citizens within each state that holds a particular religious view can influence the politics of that state and impact whether a particular state issues same-sex marriage licenses.

If a person believes that their religious texts and leaders advocate for the use of aggression, they may use force to promote their viewpoint, particularly if they have access to weapons. This can involve actual war and terrorism, or it can mean persecuting or restricting those who disagree, depending on where they live in the world and the political context in which this occurs.

Conflicts can arise between regions due to strong differences in ideology, disputes related to historical ties to lands and resources, and memories of past persecution and violence. Add up these factors and you have groups that become embroiled in territorial conflict that can last a very long time, as with conflicts between Jews and Muslims in Israel and Palestine.

On the flipside, for many individuals, religion is a guiding force in moral behavior, shaping whether they choose to participate in violence and injustice for their own gain. Many religious leaders have advocated for political and social justice through nonviolent means. An example in the United States is the Reverend Martin Luther King Jr.'s call for Christians and others in the south to peacefully protest the immorality of racial segregation. Mahatma Gandhi also used this approach of civil disobedience to ultimately lead India to gain independence from colonial rule while promoting cooperation between Hindus and Muslims. Today, the current Dalai Lama, leader of Tibetan Buddhism, raises awareness of the plight of the people in that region of the world. Geographers seek to understand this complex impact of religion in a person's life and in the different regions of the world.

Religion can impact all aspects of society and is one of the lenses used to interpret the world around us. Some religious labels, such as being Jewish, can even refer to one's sense of ethnic identity rather than a set of spiritual beliefs.

Religions vary in how their believers are distributed throughout the world. There are also many ways of practicing any one religion. Most religions focus on sacred religious texts and the wisdom of leaders in their faith.

If a group believes that their religious texts and leaders advocate for the use of aggression, they may use force to promote their viewpoint. Conflicts can arise from strong differences in ideology, disputes related to historical ties to lands and resources, and memories of past persecution and violence. Alternatively, religions may also be interpreted as limiting violent behavior and promoting social justice through nonviolent resistance. Geographers aim to more fully understand how religious beliefs and practices affect the people of societies throughout the world.

Prompts About the Geography of Religion:

Write an essay of approximately one to two pages that explains how geographers examine religion.

Example: The purpose of geographers is not to judge or change the religious beliefs of people in a specific region, but rather, it is to understand aspects like how that region's laws are influenced by religious beliefs.

In approximately three to four paragraphs, write an essay that explains the connection between religion and ethnicity.

Example: In some cases, religious identity and ethnic identity are combined.

Write an essay of at least one page that describes how religion can be used as a moral guide.

Example: Religious beliefs can be used as the basis to explain why certain practices are morally, socially, and/or racially unjust.

Create a poster or chart that illustrates how religious differences and conflicts can play out.

Example: Sacred religious texts can divide people who interpret them differently, even if they are purported to be of the same faith.

Pretend that you are a geographer studying religion. Think about the region you live in, and the characteristics of religion and its influences in your region, and write an essay of at least two pages that describes this. If you are uncomfortable writing about your personal experience with your region's religion, then simply make up a scenario about the way geography and religion intersect.

Example: If your region is filled with a lot of yoga studios, there may be a high Buddhist population in the area.

How Religion Contributes to Cultural Change

What Is the Christian Moral Code?