Toddlers experience a lot when it comes to gaining a sense of self-awareness and development. Learn about psychologist George Herbert Mead's research into a toddler's sense of self, the significance of I and Me awareness, and discover the four stages of self-development in toddlers that Mead identified. Updated: 09/29/2021
Create an account

What makes you who you are? How are you different from other people? How are you the same? Do you like to sing? Play sports? Do math? Are you good at relationships or better at being on your own? And how do you interact with the world around you?

Psychologist George Herbert Mead was interested in these questions. He studied self development, or the way that people's perceptions of themselves change. Specifically, Mead wanted to know how children and infants interacted with the world around them and what stages they went through to develop a unique, autonomous self. Let's look closer at two elements of Mead's theory of the development of the self: the 'I' and the 'Me,' and the stages of self. 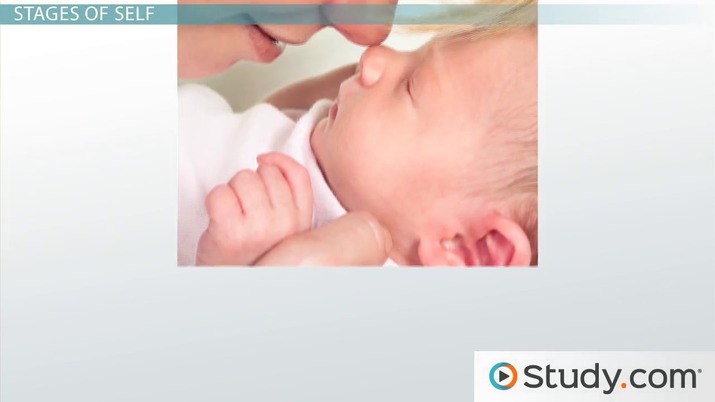 Coming up next: The Impact of Abuse and Neglect on Child Growth & Development

You've heard of the expression 'Me, Myself, and I,' right? Well, Mead had a similar concept. He believed that there were two versions of the self, the 'I' and the 'Me.' Think about it like this. You're out shopping and you see a new home theatre system that you really, really want. The problem is, it's about $100 more than you can afford to pay. You slink off, upset and wishing you had an extra $100. Right then, just outside of the store, you see an old man who drops a $100 bill. He doesn't notice that he's dropped it, and it's just lying there on the ground. You pick it up. What do you do?

Your 'I' will take the money into the store and buy that home theatre system. The 'I' is spontaneous and unpredictable. It's the part of you that has nothing to do with society, and it acts that way. According to your 'I,' no one and nothing is as important as you! But your 'Me' is the part of you that's been socialized to think beyond yourself. That part of you will catch up with the old man, tap him on the shoulder, and return the money. After all, he might need that money for something important.

From our example, you might be thinking that the 'I' is bad and the 'Me' is good. And sometimes, that's the case. But the 'I' is more than just selfish; it's also authentic and creative. There's no B.S. and no masks with the 'I.' What you see is what you get. The problem is when the 'I' is the only one with a voice. You need the 'Me' to help regulate the 'I,' but you don't want it to suffocate the 'I' completely. Ideally, you can find a balance between the 'I' and the 'Me,' between authenticity and sociability.

So how do you find that balance? Partly, that involves developing a cohesive self that represents who you are and what your values are. Mead pointed out that this occurs in four stages, and it occurs during infancy. The stages occur at different times during infancy and childhood for different people, but they always proceed in the same order.

1. Imitation: Have you ever seen a baby playing with his mom? He will mirror, or imitate, her actions and facial expressions. He's learning about himself and others and how to act based on what other people are doing, especially his parents.

2. Play: After a while, the baby begins to understand that symbols can represent something. For example, a toy car represents a real car. Once a child reaches this stage, he will begin to use his imagination. Suddenly, he's not just going through the motions; through play, he can become anything he wants: a firefighter, ballet dancer, world-class athlete, chef, or anything else he can think of. This stage involves him learning to think about others and how they are alike or different from him.

3. Game: Once a child becomes good at playing a role, he begins to do more. He's able to play several roles at once and understand relationships between them. He might start acting out scenes, alone or with others, and figuring out how people work together. For example, he might pretend to be a firefighter who is rescuing a baby and giving it back to its mom. Though it looks like he's just playing, he's really exploring the relationship between firefighter and baby, firefighter and mom, and between mom and baby.

4. Generalized other: The final stage in the development of a self is to understand that there are expectations and perceptions that people have of each other. For example, during the game stage, a child might pretend to rescue a baby from a burning building. As he grows, though, he'll come to understand that people might see a firefighter as a hero and turn to him for strength. As such, he'll have to make his firefighter a strong, powerful figure. He will make decisions about what the firefighter does based on the perceptions and expectations of others.

A younger child might play pretend and be a firefighter who likes to dance in the ballet when he's not putting out fires. But as he grows older, he begins to realize that most people think that firefighter and ballet dancer are mutually exclusive careers. As such, he will tailor his firefighter play to be more typical of what people expect.

As a child plays and explores through these four stages, they are exploring relationships in general. However, they are also building a cohesive self. A boy might go from imitating his mother when she danced around the living room to pretending to be a ballet dancer to creating a ballet with his sister to realizing that ballet dancers aren't seen as masculine. He might change his perception and interest in dance or he might continue to pursue it. Either way, he's developed a stable sense of who he is.

George Herbert Mead studied how people understand themselves in relationship to the world around them. One part of his theory centered on how people had two elements of themselves: the 'I,' which is spontaneous and authentic, and the 'Me,' which is socialized. In addition, Mead said that children go through certain stages as they develop a sense of self. The stages of self are imitation, play, game, and generalized other.

Once you have completed this lesson, you should be able to:

Presentation of Self: Methods to Presenting The Self

Pros & Cons of Going Global With a Business

The Self as the Brain According to Paul Churchland

Sense of Self and Self-Socialization: The Development of Self-Views

Self & Behavior According to Gilbert Ryle

David Hume & the Lack of Self