Learn how George Washington helped to form the new United States Government. The topics covered are the inauguration of Washington and Adams, organizing the courts, Washington's Cabinet, Hamilton's Plan, and the interpretations of the Constitution. Updated: 08/16/2021
Create an account

The President and Congress begin to set up the new government. Why does it matter? The strength of the U.S. today is due to the decisions of the founders about how to organize our government.

In 1789, George Washington takes office. Washington was the top vote-getter. (John Adams received the second-highest number of votes to become vice president.) In April, he headed north to New York City, the new nation's capital. The capital would later move back to Philadelphia from 1790 - 1800 while Wash.D.C. was being constructed.

On April 30, 1789, Washington and Adams were inaugurated, or sworn in, as president and vice president. Washington was in a uniquely difficult position. He knew every action he took would set a precedent. Initially, they couldn't even agree on what to call him. The debate in congress over 'His Excellency' or 'His Highness' and other things lasted over a month, finally settling on 'Mr. President'. 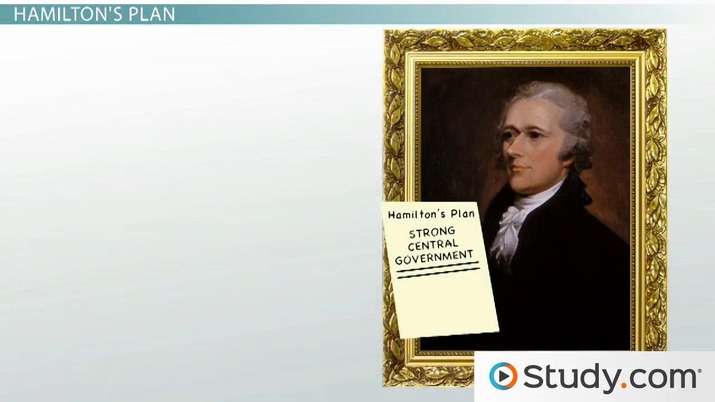 Coming up next: Hamilton and the Federalists vs. Jefferson and the Republicans

Congress had many other differences to settle on how to run things - for instance, organizing the courts. The Constitution left many things to be decided by the Congress. The 3rd Article creates the Supreme Court but left it up to Congress to decide the number of justices on the court. The power of the court was also an issue. States have their own courts, so how would authority be divided between them?

The department heads and Attorney General made up Washington's Cabinet. Now, the Cabinet is not mentioned in the Constitution. Washington began the practice of calling government heads together to advise him.

In his new post as Secretary of the Treasury, Alexander Hamilton inherited the old problem of the huge war debt. By 1789, it was $52 million. Hamilton and the other leaders knew that the debt had to be paid to gain the respect of foreign nations. Respect equals business.

Hamilton believed in a strong central government; that is reflected in his plan. He knew the nation's economy would depend on rich merchants and manufacturers. He knew they needed to pay them back. In 1790 he proposes the plan to Congress:

He wanted the federal government to pay the states' war debt, but those states which had already paid theirs (Virginia, Georgia and other Southern states) didn't like the idea of covering the Northern states' debt.

To gain support, Hamilton got help from his political rival Thomas Jefferson. They reached a compromise. The South would support the plan to repay the debt, but the North agreed to move the capital to the South on the Potomac River between Maryland and Virginia. Today we call this spot Washington D.C..

For raising revenue, Hamilton liked tariffs. A tariff is a tax on imported stuff. It brings in money and encourages people to buy American products. At this time many European products were popular; you know all the cool kids wanted clothes from France! The tariffs would be good for the government.

The creation of a national bank: Hamilton called for the creation of the bank to have a safe place for the government to keep money, to make loans to businesses and government and to issue bank notes (that's paper money). This plan would strengthen the central government.

Jefferson and Madison believed in narrow, strict interpretation of the Constitution. They said the Constitution did not authorize the feds to set up a bank. Hamilton disagreed.

He believed in this loose interpretation of the Constitution. He states that 'necessary and proper' steps may be taken to carry out the needs of the government - it is written in Article I of the Constitution. He said the bank was 'necessary and proper'. Hamilton and Jefferson brought their cases to President Washington. Hamilton won this one. The Bank of the United States was established in 1791.

One amazing precedent set by President Washington is that he did not run for a third term. Washington was so respected, he could've won the presidency for the rest of his life, but he chose to step aside after eight years. A few tried, but no president had more than two terms until Franklin Roosevelt - and in 1947, the 22nd Amendment made Washington's precedent the law. Today, no president may be elected to more than two terms.

President Washington created his Cabinet from his department heads to assist and advise the president on the nation's issues.

The new government had to solve the economic problems of paying off war debts and creating a plan to handle other debt, and Congress had to agree on it.

Hamilton's plan arranged for the government to pay off the states' war debts, argued to raise revenue through tariffs and supported a national bank.

President Washington stepped aside after two terms, setting a precedent of American presidents only serving a max of eight years.