George Washington's leadership affected the battles of Trenton and Saratoga, as well as the encampment of Valley Forge. Explore these battles and who was involved, and consider the difficulties the army experienced in Valley Forge. Updated: 08/16/2021
Create an account

The Times that Try Men's Souls

The Battles of Lexington and Concord fired 'The Shot Heard Round the World'. For the first time, Enlightenment ideas of republicanism and the consent of the governed were to be tested in a war between an empire and its rebel colonists. Could George Washington, with his army of volunteers, manage to defeat the most powerful military in Europe? Or would King George III retain control of the most profitable land in his empire and restore order until the colonists could be persuaded to abandon this war of independence?

1776 started well for the Americans, but it was the year the Revolution almost died. In March, the Continental Army forced the British out of Boston. But shortly after the signing of the Declaration of Independence in August, the imperial army returned, landing this time in New York. The well-trained, well-equipped British fighting machine overwhelmed Washington's ragtag band of militia in the biggest battle of the war. They captured 3,000 American prisoners of war and set them adrift in a rudderless ship in New York harbor, commencing the use of deadly prison ships, where more Patriots died than in combat. On September 11, 1776, the British commander offered peace and an end to the war. All the Americans had to do was retract the Declaration of Independence. Everything else would be forgiven. The Americans, led by John Adams, refused these terms. So, from their new base in New York City, Britain moved into New Jersey, capturing more territory, a fort and supplies that Washington badly needed.

Things continued downhill from there. The Continental Army had dwindled from an impressive 20,000 troops in March to just 5,000 by winter. Unlike the British regulars, Americans weren't professional soldiers, and their interests were divided. It wasn't uncommon for men to desert the camp and return home to attend to business, a harvest or some other personal matter. Plus, the original enlistment term for the Continental Army was a maximum of one year, causing significant turnover and training and logistic problems for George Washington. At least one man plotted to supplant Washington as commander of the Continental Army. Thomas Paine wrote 'These are the times that try men's souls.' 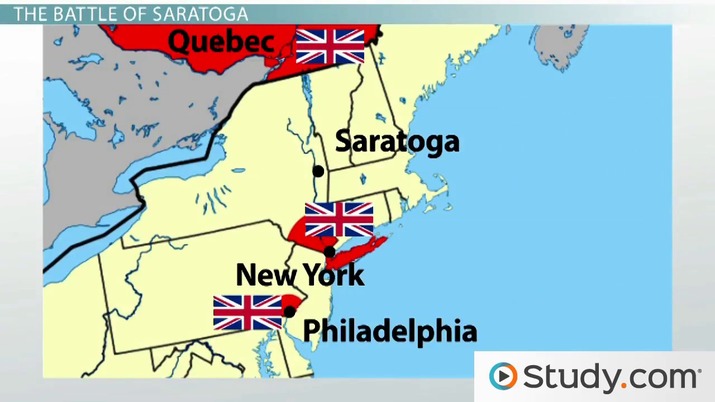 Coming up next: John Paul Jones and the Naval Battles of the Revolutionary War

The Battle of Trenton

Washington needed to act decisively, knowing that his next move could mean life or death for the Revolution. In a surprise move, he led a stealthy attack on Christmas 1776. He crossed the Delaware River in the middle of a stormy night, taking the British army - comprised mostly of Hessian troops - completely off guard. In what's known as the Battle of Trenton, the Continental Army captured nearly 1,000 prisoners, supplies and equipment and successfully defended the city from the advancing British army. Capturing Trenton, NJ, was not merely a military victory, it was a badly needed morale boost. Over the course of the winter, Washington pushed the British back to their base in New York City.

The Battle of Saratoga

In early 1777, the British had two large army bases in North America (one in Quebec, and one in New York). From New York, the British army under the command of General Howe attacked up and down the East Coast, taking control of Philadelphia on September 11, 1777.

Meanwhile, back in June, British General John Burgoyne left Quebec with the goal of cutting off New England from the rest of the colonies. Though his Indian forces had retreated and loyalist forces never appeared, Burgoyne proceeded cautiously toward Albany, NY, because he had to find a better location to spend the winter. But before he could reach it, he was stopped short by Washington's army at Saratoga. American General Benedict Arnold had accurately predicted General Burgoyne's first move and minimized British success by targeting American sharpshooters at the British officer corps. Burgoyne waited for reinforcements that never came. General Howe was making his way to Philadelphia, and the remaining troops in New York were too few and too far away. Burgoyne's army was running short on ammunition and food. After an unauthorized, drunken charge led by Benedict Arnold, Burgoyne was outnumbered and surrounded. He surrendered to General Horatio Gates on October 17, 1777.

The Battle of Saratoga proved to be the turning point of the Revolutionary War. Of course, it was an important military success, minimizing the threat from Canada. More importantly, it was a political victory. Early in the war, Benjamin Franklin had petitioned France for help. They sent secret financial aid but refused to send soldiers. (Although, despite this ban, many Frenchmen did travel to America and enlist on their own. Perhaps the most valuable of these volunteers was the Marquis de Lafayette, who paid to outfit his own ship, arrived in America as a major general and proved himself to be a valuable military leader.) However, following the victory at Saratoga, France formed an alliance with the United States of America. France declared war on Great Britain and tipped the scales in favor of the Patriots. In addition to providing military support, France convinced other nations to declare war on Great Britain. The Americans were strengthened, and King George III had bigger worries than rebel colonists in North America.

But friendship with France didn't immediately improve the condition of George Washington's army as the winter of 1777 set in. The British had forced the Continental Army to withdraw to the safety of Valley Forge, PA, where Washington directed the creation of shelters for 12,000 men with only one ax available. Their clothes were in tatters, a third of them had no shoes and blankets were scarce. Four thousand of the men were declared unfit for duty as a result of malnutrition, exposure and disease. They relied on the assistance of civilian friends and relatives, who brought food, supplies and comfort to the troops. Nearly a quarter of his army did not survive the winter at Valley Forge.

Washington wisely decided to use the winter to his advantage and found help from the Marquis de Lafayette as well as a Prussian officer named Baron von Steuben. He figured that keeping the men busy would not only improve morale, it would make his men better on the battlefield and more efficient behind the lines. Though history has revealed that von Steuben was not truly a baron and that he had inflated his credentials, he was effective in systematically training the American soldiers based on the Prussian military system. In the spring of 1778, Washington's reduced force was better organized and more prepared for battle than they had been the previous fall. Plus, France had drawn off British ships and soldiers from North America so that they could fight France in the Caribbean. France also brought soldiers to help the colonists fight. Things were looking up.

Let's review. Under George Washington's leadership, the Continental Army had forced the British out of Boston in March 1776. When the British returned that fall, they were stronger and better organized than before. They easily captured New York and offered terms of peace. The Americans refused, and the British proceeded to conquer the surrounding territory. With a dwindling army, Washington executed a surprise attack on Christmas 1776, launching the successful Battle of Trenton and ultimately driving the British out of New Jersey.

The British, under General Burgoyne, pushed down from their base in Canada with the intent of isolating New England. After meeting the Continental Army, Burgoyne waited for reinforcements, but the main British force was on its way to capture Philadelphia. Washington won the Battle of Saratoga, inducing France and some of her allies to join the fight on the American side. Meanwhile, the colonial troops were exhausted and running out of supplies. They spent the winter at Valley Forge, PA, recuperating, planning and training with a Prussian military expert.

The Declaration of Independence: Text, Signers and Legacy

The Whiskey Rebellion and Battle of Fallen Timbers