Globalization is causing the world to rapidly become a global society--a unified community on a world scale. Learn how the modern global society emerged, the interconnectedness of nations, and how world crises impact the world. Updated: 09/15/2021
Create an account

For as long as humans have lived on Earth, it has been shaped like a globe. Yes, we may have thought it was flat for a while, but in reality it was a sphere. Furthermore, humans have lived on this global sphere in just about every place. This has been true for hundreds of thousands of years, so why are we only now making such a fuss about a global community?

Well, despite the fact that international trade is far from something new, modern technology and transportation have connected people on an unprecedented scale. You may have heard of the term globalization, or the integration of international economies, politics, and culture. Why does globalization matter? Because, for the first time in human history, we may actually be facing a true global society, or a unified social community that encompasses the entire world. 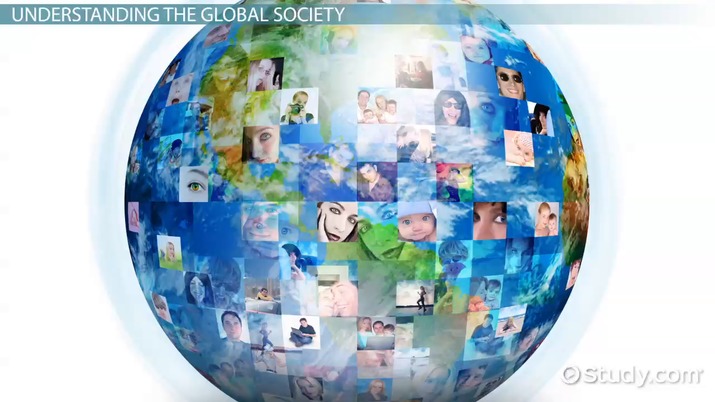 International trade, international politics, and even the sharing of cultures, is nothing new. What truly defines the global society is the idea that people are completely integrated with each other. It's not that we don't have differences; it's that we all rely on the same community networks. Just think of the world as one gigantic, spherical city. Do you know everyone in your city? Probably not, and you probably don't have everything in common with them either. However, you do rely on the same economy, the same cultural values, the same structures of government, and so forth. These things define a society, and we're starting to see them emerge on a global scale.

Emergence of a Global Society

So, where do we actually see the emergence of a global society? One of the most obvious places is in the international economy. For all practical purposes, there isn't a nation on the planet that doesn't rely on a massive system of international trade to supply at least some of the products it needs. This economy is more than just a sharing between various nations; it is a global system in which markets and resources are planned out on a world scale.

We can also look at culture. More and more, major cultural productions, from films to music to art, are taking on global significance, giving people around the world something to share and enjoy together. Art in the modern world is rarely without global significance; it's related not just to one nation but to a global society.

Finally, and this is very important, we're starting to actually establish global government. A system of shared government, or of shared ideas about government, is a defining feature of all societies. Since 1945, the United Nations has steadily increased its practical ability to conduct world affairs. The World Health Organization, the World Bank, the World Trade Organization... all of these groups are devoted to maintaining the functionality of a global society.

There's one other telling factor that points to the emergence of a global society that deserves mentioning: global crises. World War I and World War II were major international conflicts, but they were understood mostly in terms of how they impacted individual nations. That's quickly changing. With the world being so interconnected, it's difficult for us to separate anything from its relationship to our global commercial, political, and social networks. If the economy of one nation crashes, that impacts the global market. Environmental issues are understood in terms of their impact on the entire planet. Even terrorism, being largely perpetrated by those not attached to any single state, is being seen more and more seen as a threat to global security and not just to the well-being of specific nations. So, conflict also points out the gradual rise of a global society, because these crises are giving us all causes over which to unite. Working together, talking about issues, and even the simple act of worrying as a single community all help turn international issues into issues for a single, global society.

We live in an international world, but it's actually becoming more than that. An international world is defined by lots of interaction between different societies. Instead, we're starting to develop a single global society, or a unified community on a world scale. This is largely a product of globalization, or the integration of international markets, politics, and cultures. We can see the rise in the global society through a globally managed economy, cultural productions that bring us closer together as a single community, and the development of global governance organizations that promote the well-being of a unified world. Even major crises are being understood less in terms of how they impact us as individual nations and more of how they impact us as a single community. In short, we may be turning the societies of the world into a single global society.

The Theory of Demographic Transition: Overview

Statehood Overview & Requirements | How Does a Territory Become a State?

The Effects of Globalization on Labor Conditions