Global warming is a multifaceted and complex issue that involves both natural and human causes that increase the number of greenhouse gases. Learn how the atmospheric temperature can increase leading to global warming, explore some of its causes and how it affects climate change, and discover the role of the greenhouse effect on global warming. Updated: 08/19/2021
Create an account

Hello, and thank you for joining me on everyone's favorite news show Top Five Things to Know. I am your host, Temp R. Ture. 'Global warming' - just the mention of the words conjures up images of super storms, red thermometers, melting glaciers and polar bears (and that is just if you are lucky). There are as many opinions about causes, effects and who is to blame. There are celebrities, athletes, news talk shows and teachers who have something to say about this issue. What do we believe? What is real, and what are scare tactics? How do I know who to listen to or not listen to? How can I make an informed decision about this topic? What points are scientific, and which ones are not? We will take a look at this topic on today's edition of Top Five Things to Know! 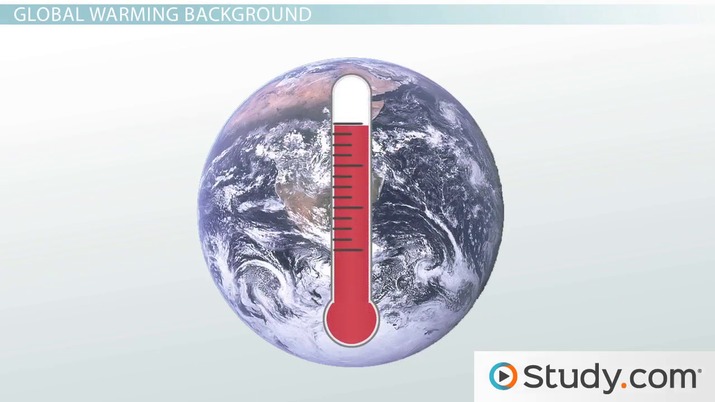 Coming up next: The Water Cycle: Precipitation, Condensation, and Evaporation

So, what is meant by the term global warming? It is often used in many ways to mean different things, and it is blamed for a myriad of problems. Global warming simply means an increase in the average temperature of the earth's atmosphere near its surface - either from natural or human causes - that may result in a change in global climate patterns. There it is, folks, plain and simple. Global warming means the globe is warming. But don't worry, that's not the end of our show. I have compiled a 'Top Five Things to Know' list about this thorny issue. So, without further hesitation, here are tonight's Top Five Things to Know!

Visible light, as shortwave radiation (shown below in yellow), passes through the atmosphere and is converted to infrared radiation we know as heat (shown as grey). Some of the heat escapes back into space, and some stays in the atmosphere, trapped and reflected back to the earth by gases in the atmosphere. This is very similar to a greenhouse, which traps in heat to keep plants warm.

The natural causes for these gases include volcanoes and animal waste, while human causes include combustion of fossil fuels and increased animal waste production from livestock. I know the question you are all thinking. What is the concentration of these gases, especially carbon dioxide, like?

Other Things to Know

The estimated CO2 concentration during pre-Industrial Revolution times was 280 ppm. Measurements over long periods of time have shown that carbon dioxide levels naturally fluctuate, but were historically measured to be between 200 and 280 ppm. Since carbon dioxide is a greenhouse gas, scientists believe that the temperature fluctuated as a result of the cycling CO2 levels. Is this true? Does the earth's temperature naturally fluctuate?

Number two: The average temperature of the earth is increasing. However, the average global temperature fluctuates over time. The earth's temperature is not constant now, nor ever has been. Much of the upper Midwest of the United States has geologic evidence of an ice age that occurred. The massive ice sheets that covered the area formed the Great Lakes and many other landforms.

The earth also has been this warm, too. Scientists have combined data from many sources to put together a timeline of the earth's average temperature. It has fluctuated up and down with regularity through the past. In following the cycle, we would expect there to be warming, followed by a cooling cycle. Whether we will enter the cooling cycle or continue warming because of the increased level of carbon dioxide in the atmosphere remains to be determined. So, if the earth has been warmer, that must lead us to the fact that...

In the graph below, the blue lines represent carbon dioxide concentrations, along with the red line that represents temperature recorded at the same area. Long before the Industrial Revolution, carbon dioxide gas concentrations in the atmosphere rose and fell. There have always been natural causes to this cycling. These could be factors like carbon dioxide given off from volcanoes, or even an increase in the amount of sunlight as the sun's intensity changes.

However, there also are the obvious human contributions to greenhouse gas concentrations of carbon dioxide and methane through burning of fossil fuels and decomposition of trash. Increase in burning of fossil fuels is primarily from energy production and transportation. Fossil fuels are the least expensive to use currently, so they are the most popular. Additionally, one of the byproducts of trash decomposition is methane gas. This can be captured and sold, but often, it is just released to the air to prevent dangerous build up in the landfill. In both cases, human actions are the primary contributing factors.

Well, that is what you need to know about global warming. I hope you didn't find this truth to be too inconvenient. To recap our 'Top Five Things to Know' list, global warming simply refers to the earth's atmospheric temperature warming - due to either natural or manmade causes - that result in the change of weather patterns.

Global warming is due to an enhanced greenhouse effect. The greenhouse effect is the trapping of heat by gases in the atmosphere due to the conversion of light into heat as it strikes the earth's surface. The enhanced greenhouse effect is due to an increase in greenhouse gases in the atmosphere. These are gases, like carbon dioxide, methane, nitrous oxide and water vapor, that hold extra heat next to the earth like a blanket. The concentration of carbon dioxide gas is increasing, leading to a warming trend in the earth's average temperature. This increase in gases may have natural and/or manmade causes from things like volcanoes, livestock or combustion of fossil fuels. So, until next time, friends, think cool!

After viewing this lesson, you'll be able to describe five factors that contribute to global warming.

What is Global Warming? - Definition & Lesson for Kids

What is the Greenhouse Effect? - Definition & Impact