View bio
Glycosidic linkage, or bonds, are the formation between sugar, carbohydrates, and -OR group, in four possible forms: Carbon, oxygen, nitrogen, or sulfur. See an overview of the chemistry involved, and its application in biology. Updated: 10/14/2021
Create an account

What Are Glycosidic Bonds?

This is not your ordinary bond. Oh no, this bond is one of a kind. A bond that can link carbohydrates to any molecule and dare to be different by taking on different forms is a special type of bond. What type of bonds are these? These are glycosidic bonds.

Glycosidic bonds are formed between a sugar molecule, or carbohydrate, and -OR group. There are many forms of glycosidic bonds such as C-, O-, N-, and S-. These forms are differentiated by the atom (carbon, oxygen, nitrogen, or sulfur) bonding the sugar and -OR group together.

We'll focus on O-glycosidic bonds. The '-OR' refers to when an oxygen atom is attached to any R group, which is any molecule containing a carbon and hydrogen atom. Examples of -OR groups include ketone, carboxylic acid, and ester. See if you can identify the -OR groups in these functional groups by looking at Diagram 1.

The term glycosidic linkage is the same as glycosidic bond. In biology, glycosidic bonds are commonly seen in carbohydrate molecules, such as simple sugars and complex starches. But before we dive into the biological importance of these bonds, let's focus on its chemistry. 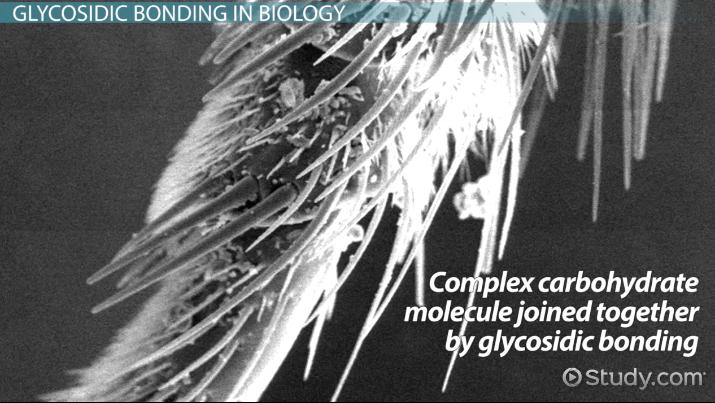 Coming up next: The Hydrogen Bomb: Definition, Explosion & Facts

The Chemistry of a Glycosidic Bond

Now on to the fun part, the chemistry of a glycosidic bond. This bond is considered to be a covalent bond. Covalent bonds are chemical bonds formed between atoms through the sharing of electrons. These type of bonds are formed because atoms willingly exchange their electrons with each other to create this link. Remember, we discussed that a sugar molecule is required when forming a glycosidic bond. Chemically, this sugar molecule is referred to as a hemiacetal or hemiketal group.

Going back to sugar molecules, these contain hemiacetals or hemiketals. The difference is that these chemical groups are cyclic which means that they look like a ring structure. The sugars glucopyranose and fructopyranose, shown in Diagram 3, are great examples of hemiacetals and hemiketals.

Do they look familiar? They should, as these are cyclic structures of the sugars glucose and fructose, both containing a hemiacetal and hemiketal. The biology folks attach the word 'pyranose' to the ending of a carbohydrate name. Pyranose are carbohydrates with structures that are cyclic, either 5 or 6 membered rings. Can you guess what type of ring is glucopyranose and fructopyranose? They are 6 member rings as 6 carbon atoms are used to form the cyclic structure.

An anomeric carbon is a carbon atom in a cyclic ring surrounded by two atoms containing an oxygen. It is readily willing to share its electrons to form a glycosidic bond with an -OR group. Now that we understand the basic chemistry of glycosidic bond formation, we can apply this to a few biological examples.

In biology, carbohydrates love to use glycosidic bonds when linking monomers together. Here are two examples:

1. Identify each of the compounds below as either hemiacetals or hemiketals.

2. Identify the anomeric carbon in each of the carbohydrates given below.

Lactose Structure, Intolerance & Molecule | Is Lactose a Disaccharide or a Carbohydrate?