This lesson will explore the religions of early Rome. In doing this, it will highlight the Roman deities, Janus and Vesta. It will also explain the concept of numina, and the importance of Roman Lares and Penates. Updated: 12/16/2019
Create an account

Unlike the grandeur of the Roman Empire, the religion of early Rome was mainly focused on the simplicity of the home. As these early people struggled for survival, their religion mirrored these values and was highly personal. With this, they relied on their gods to see them through. They believed their god Tellus fertilized the soil, while Pomona ripened the fruit. Ceres controlled the growth of grain, and Flora filled the fields with blossoms. 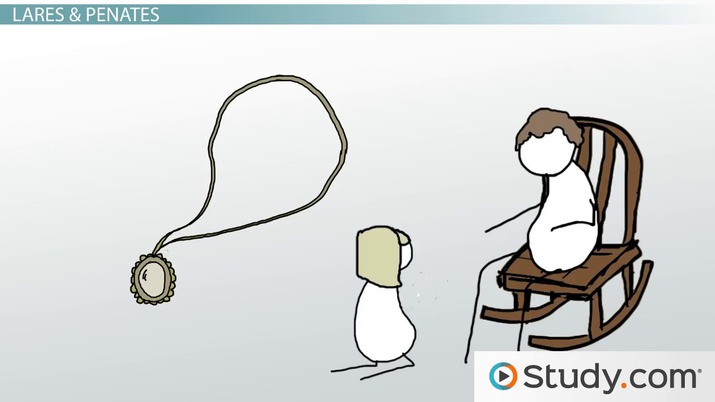 Coming up next: The Religions of Meso-America

To an early Roman, the world was filled with free floating supernatural forces, known as numina. These numina were used by the gods to manipulate, bless or even curse a human life. As the Roman state developed, it actually coined these early beliefs, The Religion of Numa. Two of early Rome's most important numina-wielding gods were Janus, defender of the threshold, and Vesta, goddess of the hearth.

Let's first take a look at Janus, the defender of the threshold. Also known as the god of beginnings, from whose name we get the month January, Janus was highly regarded by early Rome. An angry Janus could mean very bad things for the household. So awesome was his power, it was incumbent upon the male of the home to be on very good terms with Janus.

This was especially true as men were considered the priest of their homes. They were even believed to be indwelled with their own spiritual force. Taking on the form of a snake, this essence of manhood was ironically known as Genius.

The feminine spirit was known as Juno, and while the men were cozying up to Janus, the women found themselves more aligned with Vesta, the goddess of the hearth.

Since the hearth was the center of the home, and since women were responsible for the home, it's easy to see why Vesta was given the female form. So important was she, the Roman women would offer her a sacrificial portion of every meal. This was done before anyone else could partake of the meal.

Adding to their reverence of Janus and Vesta, the early Romans paid homage to the Lares and Penates of the home.

To explain, Lares were believed to be the spirits of family ancestors. These spirits, the most important of whom was the lar familiaris, were represented by little figurines that were given a special place of honor in the home.

Like today's family heirlooms are housed with care, the Lares figurines were kept in some sort of sacred cupboard or shrine and prayed to on a daily basis. However, on special occasions, like weddings and birthdays, the Lares were honored with more fantastic rituals and feasting.

Closely linked to the Lares of the home, were the Penates. They too were represented by figurines and displayed in the home. However unlike the Lares, even the ancients weren't sure how the Penates originated. Known also as the Inner Ones, the Penates sort of presided over the daily function of the home and protected the storeroom.

As the Roman state developed, it collectively claimed its own Penates known as the Penates Publici. However, with this development, the importance of the home in worship remained a huge part of Roman life.

Unlike the grandeur of the Empire, the religion of early Rome and its people had very humble beginnings. Since most of life was about the home, protection and childrearing, their religion deities followed suit. Believed to be surrounded by supernatural forces known as numina, the people paid homage to gods who could manipulate these powers.

When it came to protection from outside forces, Janus, the god of the threshold, took center stage. So important was he that the men of the home tried very hard to stay on his good side. An angry Janus could spell disaster for the family. Adding to the need to please Janus, men were believed to be indwelled with a mystical masculine force known as Genius.

In the same vein, women were indwelled with a feminine force known as Juno. This gave them closer ties to Vesta, goddess of hearth and home. It was to this goddess that women sacrificed portions of each meal daily.

Early Romans also paid great homage to the Lares and Penates of their faith. Believed to be spirits of ancestors, the Lares were depicted with small figurines and guarded in a special cupboard.

Like the Lares, Penates were also depicted as figurines and given special storage. However, the origin of these Inner ones was unknown. As the culture of Rome developed, the Penates of the state were the Penates Publici.

Yet, even as the state grew in power, the essence of Roman religion maintained in the home. After all, like the old saying sort of goes, 'Home is where the hearth is!'