View bio
During the Golden Age of India, knowledge thrived while Hinduism and Buddhism reached new heights. In this lesson, learn more about the empire that led this golden age and its accomplishments. Updated: 02/10/2022
Create an account

The Golden Age of India

Most modern cultures have had their own golden age, a term we use to refer to a time of great accomplishments that allowed the culture to prosper. The country of India had several of these golden ages, but the most popular Golden Age of India took place during the Gupta Empire, the ancient Indian empire lasting from around 320 to 550 CE.

It's particularly popular in part because it was the longest of such eras of accomplishment, lasting more than two centuries. It also comprises some of the most substantial accomplishments in Indian history. Let's explore the Gupta Empire in more detail, the accomplishments of the empire, and its downfall. 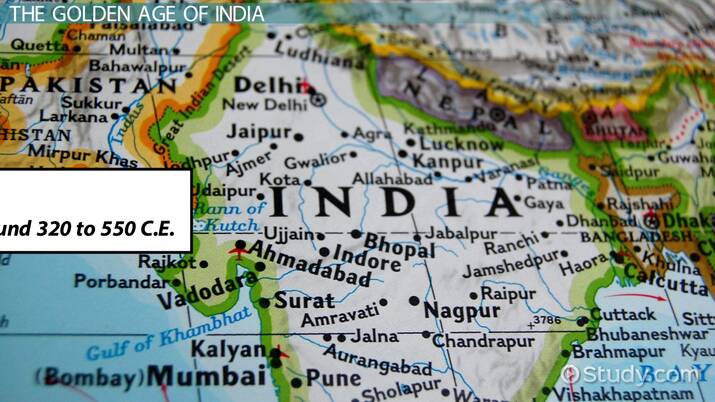 Coming up next: The God Vishnu: Incarnations, Attributes & Facts

The Gupta Empire was ruled by the Gupta dynasty, which controlled northern and central India as well as stretches of southern India. Much as they are now, these regions were heavily populated. The first ruler of this empire was Chandragupta I, who came to power by conquering much of the Ganges River valley. The Ganges River valley was of great importance because it contained abundant resources and was located near the capital city was Pataliputra, which remained the capital of the Gupta Empire.

Before Chandragupta I, the territories of India were heavily divided and constantly at war. But Chandragupta I reintroduced the politics and principles of the Maurya Empire, which ruled a relatively peaceful empire more than 500 years prior. So Chandragupta I was largely welcomed by the people. He, as well as several other predecessors in the 200 years prior, led a successful empire focused on social and economic stability.

Accomplishments From This Era

The Gupta Empire saw a vast range of scientific and cultural achievements. To the chagrin of many high school math students, trigonometry and geometry got their start during this golden age. And Guptan mathematicians developed the concept of zero and the number system. Other major contributions from this era helped improve human health. Not only did scientists and doctors expand the alternative system of medicine called Ayurveda, but they also improved surgical practices and helped popularize vaccinations.

But the Guptan Empire didn't focus solely on science and math. Art and architecture were abundant during this time. In fact, the son of Chandragupta I, Samudragupta, was an avid art lover and commissioned works that can be found in museums to this day. The Gupta Empire is also responsible for a game still popular around the globe today: chess.

Perhaps the most remarkable facet of the Gupta Empire was its approach to religion. The empire helped to spread Hinduism to other nations, particularly throughout Southeast Asia in areas that traded heavily with the Gupta Empire. And the rulers of the empire were Hindu, but they did not force religion on the Gupta people, as so many rulers have done in other cultures. Rather, it was largely an era of religious freedom in India.

So Buddhism also flourished during this time. A Buddhist university was erected, and people of both Hindu and Buddhist religions lived together peacefully and helped to inform each other of their beliefs.

Sadly, this religious freedom ended with the fall of the Gupta Empire in 550 CE. Out of the north came several waves of barbarians, including the Huns, that helped to weaken the Roman Empire.

All right, let's take a moment or two to review. The Golden Age of India was a time period of great scientific discovery. It took place during the Gupta Empire, the empire that lasted from 320 to 550 CE. This empire helped introduce the world to the concept of zero, the number system, new surgical practices, vaccinations, and even the game chess. The Gupta Empire is also famous for its religious freedom. Buddhists and Hindus lived together peacefully until the fall of the empire in 550 CE.

Prompts About the History of the Golden Age of India:

In at least two paragraphs, write an essay that explains what a golden age is and why the Gupta Empire is considered India's golden age.

Example: The Gupta Empire was a very long-lasting one, indicating its strength.

Write an essay of approximately two to three paragraphs that describes what life was like in India prior to the Gupta Empire. Your essay should also explain the significance of Chandragupta I, and discuss why the Gupta Empire later fell.

Example: Invaders like the Huns weakened the Gupta Empire, which contributed to its fall.

Make a chart, poster, or some other type of graphic organizer that lists and briefly describes the accomplishments and inventions of the Gupta Empire during India's golden age.

Tip: Remember that there were not only scientific and mathematic advancements during India's golden age, but also artistic and cultural ones.

Create a poster, chart, or some other type of graphic organizer that details the characteristics of religion during India's golden age.

Example: Although India's golden age helped spread Hinduism, the Gupta leaders did not force people to convert to Hinduism.

The Growth of the Maurya Empire

Aryan Invasion of India History & Significance | Who were the Aryans?